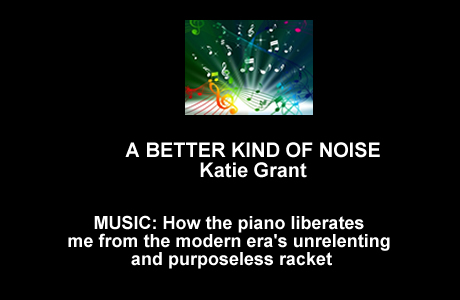 When I picture my mother, I picture her on a horse, questing for old packhorse routes buried beneath the moorland squelch. She had more success than that other great questor, Don Quixote, of whom she created a lively clay sculpture, stolen by some bastard when, after my mother’s death, my father opened the garden under the National Gardens Scheme. I harbour dark thoughts about that thief. But let’s return to picturing my mother. Where do you picture yours? And where do you imagine your children picture you?

I hope that mine picture me at the piano. It’s my favourite place, so it’s unsurprising that the closing down sale of the Edinburgh Piano Company caught my eye. Ninety pianos went under the hammer, some grand and Grand, some less so. I knew none of them. I don’t think I ever set foot in the Joppa Road warehouse. Yet all day I felt the loss because sometimes, waiting for an appointment or early for a train, I while away odd half hours in piano stores, no doubt irritating the staff when it’s reasonably clear, despite my fibs, that I’m not a potential buyer. Harrods has been a favourite. What choice! My greatest thrill, however, was 10 minutes on a legendary Fazioli at Jacques Samuels on London’s Edgware Road. 'Do you like it?’ asked the salesman. I effused, but in truth, so overcome was I by the Fazioli name, I might have been playing a table-top.

And anyway, 'like’ isn’t what I feel about pianos. It’s more visceral than that. Pianos without stools, or shut away in chilly parlours like Aunt Maud in her coffin, upset me. Percussive and silken, solid and fluid, pedestrian and magic, pianos are mechanical miracles, and beautiful or ugly, expensive or cheap, they need playing. Ah, you’ll think, she’s going off on one about the value of music, and how she wishes to pass that onto her children. I could, but that’s only half the story. The real value of a piano is that even if music’s not your thing, the act of playing helps make sense of the world, and if ever humanity needed perspective and sense, it’s now.

The engagement is so profound that when you get up, you’re changed. Not mystically unless, perhaps, you’re a piano-maestro. Fumbling amateurs like me simply find themselves cleansed of Brussels Tartuffery, Holyrood Pecksniffery, Westminster bombast and the rest of the modern era’s unrelenting and purposeless noise. The piano, of course, makes a noise too, but even when loud, it’s noise with purpose and nuance. Poor playing may be painful but it’s still a better kind of noise.

Incidentally, this is why, over the EU referendum, whilst hugely enjoying the priceless comedy of the SNP directly contradicting themselves as they urge us to vote for, er, union, I shall listen most carefully to William Hague. Ousted from the Tory leadership in 2001, he took up the piano, and with brief gaps for the pressures of high office, has been working at it ever since. A politician who practises the piano has the right instincts even if those instincts don’t always prevail – I stick in that proviso quickly because Condoleeza Rice, secretary of state to President Bush at the time of the Iraq war, is a very fine pianist, and mistakes, she made a few, and not just at the piano. That she admits to error, though, may be connected with her piano playing. Playing the piano is the antidote to smugness. You’re never satisfied with what you’ve done.

Yet alongside the dissatisfaction, the piano is benignly addictive. If you practise you will get better. Yesterday, I couldn’t play this bar hands together, that bar without stumbling, and muttered 'impossible’ when I saw what lay in store over the page. Today I’ve made a go of hands together, the stumble is less stumbly and after a bit of teasing out, the impossible downgrades to difficult. Tomorrow I’ll build on those small steps, and I’ll not just be better at finding the notes, I’ll understand better the musical nuts and bolts. At the end of the year, I’ll celebrate my snail-like improvement and wonder anew at the astonishing marriage of engineering and emotion that is the piano’s heart.

Naturally, those who’ve taken up other instruments will be hottering. What about the violin, the flute, the drums? Wonderful instruments, all. But the piano steals a march because of its almost unique self-sufficiency. You can play alone your whole life, and although playing with others is delightful, it’s not essential. With a piano, you’ll never be lonely.

Perhaps that last thought is key. Perhaps I always picture my mother questing on her horse because that was where she was at her happiest, most rewarded, most complete best. I don’t have a horse and my own quest is not for packhorse routes but to experience, under my fingers, music well mastered and well understood. It doesn’t seem silly, then, to hope that my children remember me sitting at the piano – not for my playing which, thanks to the marvellous invention of the silencer, they hardly ever hear, but for what the instrument has given me: happy purpose, reward for work, clarity in a fuzzy world and a daily, life-affirming dose of meaningful noise.