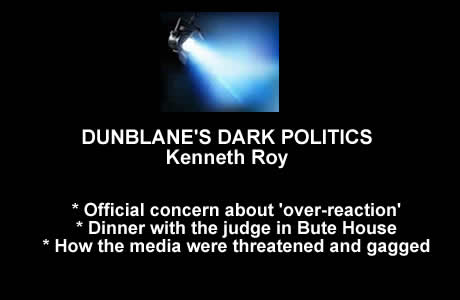 As Scotland re-lives the horror of Dunblane 20 years on, through the testimonies of its victims and survivors, we may hear rather less of the dark politics of the tragedy that touched all of us on 13 March 1996. I was about to write the 'sinister' politics. That would be going too far – though not by much.

The shambolic nature of the police operation at Dunblane is widely acknowledged. But it was worse than a shambles. It was not only incompetent but inhuman. There was only one outward sign of compassion on the part of the authorities and even it was muddled: the conscious decision not to ask the injured children for their names before they were removed by ambulance to Stirling Royal Infirmary. This meant that the parents, unaware of their children's whereabouts, were not re-united with them for many hours and that the children were deprived of the comfort of loved ones.

No-one, from the chief constable down, thought of sending an officer to the hospital to check the identities of the children. Incompetent: unbelievably inept. But at least the original motivation was decent if misguided: Central Scotland Police decided not to ask the injured children for their names for fear of upsetting them further and delaying their medical care.

No such excuses attended the dreadful treatment of the bereaved parents, who were passed like so many parcels from one waiting room to another and kept without news all morning and, by some accounts, well into the afternoon, even when the identities of almost all the children were known to the police by noon. The parents were effectively isolated from the world.

As Laura Dunlop, counsel for some of the families, later stated publicly: 'It is a form of torture to be kept waiting in the knowledge that something terrible has happened without having details of what or to whom'. She was describing exactly the form of torture inflicted on the parents by Central Scotland Police. Only the few – I am one of them – who have read the entire transcript of the Dunblane public inquiry can fully comprehend the inexcusable conduct of police officers that day and their subsequent shabby attempts to wriggle out of personal responsibility.

The behaviour of the police is a matter of public record. Far less has ever been known about the immediate political response to the Dunblane massacre. For this insight, it is necessary to excavate official papers released into the public domain long after the event.

The then secretary of state for Scotland, Michael Forsyth, who was MP for the constituency which included Dunblane, had heard the rumours about Thomas Hamilton. One of his informants was a local resident, his fellow MP George Robertson. Forsyth, like many others, took the view that Hamilton was being judged by innuendo rather than hard fact. On 13 March 1996, he finally obtained evidence – too late to save the lives of 16 children and their teacher.

The following morning, Forsyth met the lord advocate, Lord Mackay of Drumadoon, to discuss what to do. Later that day, Forsyth sent a memo to the prime minister, John Major, recommending a judge-led inquiry: 'The Lord Advocate and I consider that the judge may find it necessary to address questions relating to the way in which firearms legislation is applied in practice, about security of school premises, and about the supervision of voluntary youth workers. I think we have to allow these matters to be exposed to public scrutiny, and I have confidence that, providing the right judge is selected, we need not fear any over-reaction on his part'.

Only 24 hours had elapsed since the massacre, and yet here was the secretary of state for Scotland expressing concern about the possibility of 'over-reaction', whatever that meant. Lord Cullen – apparently a judge who could be relied upon not to over-react – was appointed later that very day.

Seven days later, on 21 March, Forsyth hosted a 'supper' at Bute House, the residence of the secretary of state, for Lords Cullen and Mackay to discuss the terms of the inquiry. The official note of the meeting included the revealing statement: 'Lord Cullen said he would find it helpful to be kept in touch with developments in government thinking on relevant issues and hoped it would be possible to have regular meetings on policy issues'.

From the start, then, there was some doubt that the judge-led inquiry would be truly independent of, and aloof from, the political machine; but this remarkable fact did not surface publicly for many years, by which time Dunblane was becoming, to all but the permanently grief-stricken, a distant memory; and so the release of the official papers did not attract a great deal of attention.

A week or so after the Bute House gathering, with worldwide media interest in the massacre intense, Lord Mackay sent a notice to editors warning them to cease their investigations – otherwise they could be held in contempt. In contempt of what, though? The judge-led inquiry was not a criminal trial. The only conceivable accused – Thomas Hamilton – was dead. The inquiry had the formal status of a tribunal. To Mackay it made no difference: legitimate and continuing press interest was somehow in danger of prejudicing the non-trial. The Crown Office added a Kafkaesque flourish to the communique: editors must not publish or broadcast the nature of his lordship's instruction.

The Scotsman, to its eternal credit, disobeyed the latter oppressive order and published a spirited piece by Ian Bell, who wrote that 'the very sorts of people Lord Mackay seeks to protect – police officers, councillors and local authority officials – have taken cover behind Cullen. It seems the public's interest, and the public's right to know, are to be allowed only one representative. Such are the number of potential witnesses to the long, squalid career of Thomas Hamilton, indeed, that the media need hardly now dare speak to anyone'. When he wrote this, Bell was not to know that the judge leading the inquiry, the integrity of which had to be preserved at all costs, had already asked to be 'kept in touch with developments in government thinking on relevant issues'.

Cullen did not over-react. The novelist Frederick Forsyth wrote that the Cullen report was 'one of the weirdest documents the Scottish establishment has ever produced'. It may not have been weird; feeble it certainly was. The police got off with nothing worse than a rap on the knuckles, the ordeal of the families was overlooked, and the judge-led inquiry rejected a ban on handguns on the grounds that such a ban would have 'a very damaging effect on the sport of target shooting' and adversely affect the economy.

These weapons of mass murder were finally banned in one of the first measures of Tony Blair's government. The economy survived somehow.