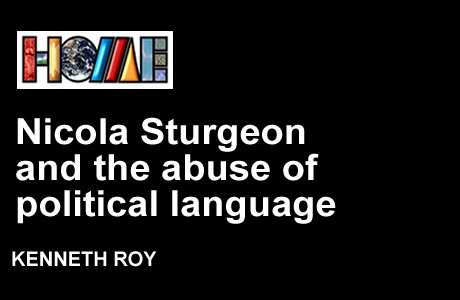 The first minister makes a couple of whopping assumptions about us – her loyal subjects – in the first paragraph of her personal statement introducing the SNP’s manifesto. The first is that 'all of us who live here in Scotland love our country’. Really? My own feelings grow more conflicted by the hour. There are times – this happens to be one of them – when it is tempting to unlove our country for the smugness and bloated pride of its political establishment. It is hard to believe that I am quite alone.

The second is that 'we all have a positive and vibrant vision of what Scotland can become’. Positive. Vibrant. These tacked-together words are the modern equivalent of the verbal refuse identified by George Orwell in his survey of political speeches and reports as long ago as the 1940s. They are meaningless.

They are worse than meaningless: they are untrue. For even if we delete the two redundant adjectives, not all of us have a vision of what Scotland can become. Many of us do not care. That is why almost half of our beloved country will not be voting a week tomorrow. The first minister confuses the people in her immediate circle – the anoraks, the zealots, the deranged – with the apathetic majority who have never known what it means to be as positive and vibrant as Nicola Sturgeon.

There are others who do care what Scotland 'becomes’, if it is capable of becoming anything beyond the nation of public service workers, waiters and shop assistants it is today, but who are unable to share the terrifying certainty of politicians.

‘My vision for Scotland’, Nicola Sturgeon goes on, 'is probably little different from yours. It’s one of a fair, equal and prosperous nation with opportunity for us all to grow and thrive’. I have no idea what she means by fair. Orwell rightly mistrusted the word 'equal’ for its lack of precision. As for prosperity, they all seem to be in favour of that. Growing and thriving is just more guff. Only the word 'probably’ appeals to me. It is an acknowledgement that other people's vision for Scotland, assuming they have one, which most don’t, could be different. It hints at a passing vulnerability on the part of Ms Sturgeon, a small breach in the stone wall of assertive populism.

Set out in this manifesto are the means by which I believe we can bring that vision several steps closer to becoming real.

As Orwell observed – anticipating the first minister’s personal statement by 70 years – political orthodoxy, of whatever colour, seems to demand a lifeless, imitative style: 'The manifestos of political parties vary from party to party, but they are all alike in that they lack fresh, vivid, home-made turns of phrase’. Instead we are offered 'the means by which I believe we can bring that vision several steps closer to becoming real’.

This is bad. In a first year essay, it would be bad. From the leader of a political party, it is very bad. But it is merely the appetiser for the main dish: the programme for government itself.

I had reasons for going next to the section on education. There has never been a party more dedicated to monitoring our children. The party loves children so much that it is appointing a Named Person for every one of them. A few years ago it gave its blessing to a questionnaire asking secondary school children when they last had anal sex. Its latest inspiration is the testing of five year olds. Why not start earlier? Why not have the Named Person standing by in the maternity ward, ready to record the inaugual wail of each new-born patriot? What our ruling party calls 'the learner journey’ surely cannot begin soon enough.

I had a second reason for going to the section on education. Not entirely convinced by the first minister’s personal statement, I was looking for reassurance that the party which insists on literacy in other people is literate itself. So I too embarked on the learner journey – in search of the SNP’s ‘vision’. A cheap day return in my case.

‘Scotland has a good education system – with great schools and teachers’: these are the infantile opening words of the chapter in question. So we have an inconsistency from the start. The schools and teachers are 'great', but the system is only 'good'. And then: 'We have a new curriculum in place, record exam passes and a record number of young people leaving school to go onto positive destinations. But we need to do more’.

But what is this 'positive destination’? It isn’t long before it re-appears: ‘We will renew school governance to consider how parents, colleges, universities and local employers can better support efforts to raise attainment and ensure that young people progress into positive destinations’. Better support efforts. The phrase might have been lifted straight from Orwell’s indictment of political language. It has the obligatory vagueness. It could mean anything – or nothing.

The young people are now progressing into, rather than onto, positive destinations, but we are no nearer a definition of a positive destination. Could it be a vibrant one? Let us hope it is not Polmont station, the destination of young offenders. We are left with another question: how is 'school governance’ (whatever that is) to be 'renewed’? It sounds almost evangelical.

'At the same time’ – the sense here of an administration capable of two actions simultaneously – 'we will work towards every professional working with children being trained on equality, to enable them to address prejudice-based bullying, attachment, child development and child protection’. It is unclear how the party intends to 'work towards’ whatever it is working towards. It is not even clear whether it’s the children who are being 'trained on equality' or the mysterious 'professional‘ – possibly the Named Person – who is being trained. The construction is so poor that it is open to either interpretation.

We’re not finished with this particular ‘commitment’. How will the party 'address’ prejudice-based bullying and what happens to the bullies who aren’t prejudiced, the ones who just like bullying for the hell of it? And what does the party mean by ‘attachment’ and how does it hope to ‘address’ this attachment?

After a brief, unhappy marriage, words and meaning have already started to part company. Meaning is finally granted a divorce on the grounds of the unreasonable behaviour of words, leaving the SNP to look after the kids. 'And we will invest in activity to make the process of finding safe, secure and permanent homes for children who cannot go back to live with their parents quicker, more effective and efficient, requiring local authorities to use the National Adoption Register’. Never mind the ugliness of the sentence and its absence of grammatical clarity. What exactly is this 'activity’ in which the party promises to ‘invest’ as part of the 'process’? As ever in this manifesto, your guess is as good as mine.

I have selected these passages not as dire exceptions but as typical examples of the document’s evasiveness and pretentiousness. Its only merit – not a redeeming one – is that it is nicely designed, like everything else the party produces.

I haven’t read any of the other manifestos. Nine days to the start of polling, many people having already voted by post, Scottish Labour under the inept leadership of Kezia Dugdale had not actually got around to publishing one. It is irrelevant anyway. They are all irrelevant, though the Tories have at least run a tactically smart and fairly professional campaign. But only the SNP's manifesto matters. It matters because, in the absence of any credible opposition, this is the party that will be in power in Scotland for the next five years, having already been in power for the last nine.

Orwell believed that the invasion of one's mind by political language with its ready-made phrases ('achieve a radical transformation', 'lay the foundations' etc: they have scarcely changed in seven decades) had an anaesthetic effect: that such language could actually corrupt thought. Having read the manifesto of Scotland's ruling party and gone on its learner journey, I now know exactly what he meant.

MORELLE SMITH
Books
Among all the threatened voices, a community of friends

DOUGLAS WOOD
Sport
One in 10: the new estimate of the number of athletes on drugs

KEVIN McKENNA
Favourites
A personal selection of things of value

Next edition of the Scottish Review: 4 May 2016
Sign up free