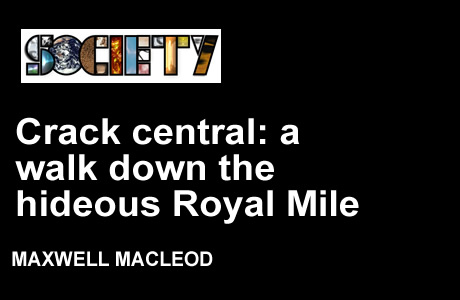 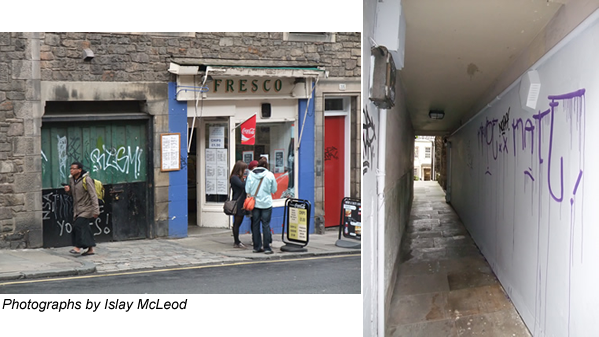 I’m writing this essay lying in a four-poster bed next door to a drug dealer. Give me a ring if you want anything. Crack cocaine (we call it white), heroin (brown), marijuana lite or the more pernicious skunk. I run a tourist flat on Edinburgh’s Royal Mile and I'm in it now. The bed’s near the window. The dealer is outside, on the pavement.

How do I know that he’s a drug dealer? Well I don’t, but it’s highly likely. Am I trying to glamourise my own and indeed his existence with these boasts? Not a bit of it. I can think of little less glamorous than the life of a drug dealer on Edinburgh’s Royal Mile. It often involves lying under a greasy blanket on his own, or more often other people's urine, in the freezing cold and waking up in a panic every half an hour to make sure he hasn’t been robbed.

I know. I have tried living on the street in three of the world’s capitals and it’s always been a hideous experience. Forget all that stuff about 'lifestyle choice’, or 'they make a fortune from selling drugs’ and 'they are only there because they want to be’. It’s rubbish. I’ve met hundreds of street dwellers in America, Britain and Japan and after their initial bombast they invariably reveal that they would rather be doing something, anything, else. Nobody wants to be on the street. It’s not any mother’s dream for their children.

The man by my bed will be having an awful life. Drunks will kick him, louts berate him, many will urinate in the doorway in which he tries to slumber. Others will do worse. I have reported on the homeless in New York and they had a phrase there that still haunts: 'A blow for some blow, a grope for some dope'. Dear God, there’s more romance in a warm pile of dog mess than in the life of the homeless drug dealer on the Royal Mile. An exotic place to be? Aye. Like Hell. Literally.

This drug-dealing on the Royal Mile has gone on for a long time. Researching this article, I came across a similar one by an Observer correspondent who, 14 years ago, was given the brief of finding out where in Britain he could buy drugs. On arriving in Edinburgh’s Waverley station he was told by his taxi driver: 'Oh go to the homeless on the Royal Mile, you’ll have no problem…'

Other than what I witness, which isn’t much, I don’t know how the drugs are distributed on the Mile but I know a man who thinks he does, and I trust him. Here’s his description. And it’s probably accurate.

According to my informant, who was brought up on a rough estate and who knows the Mile well, there is a senior dealer who hardly ever actually touches the stuff. He lives down by the parliament. He’s the bully, the fixer, the enforcer. I know this man he describes. I’ve seen him often. He would be a difficult man to love. In my less impressive moments I am inclined to think that he has a face I would never tire of punching. But I’m not proud of that. I’m sure he has his own demons. Every day he gives his messengers small packets to distribute to the homeless. Sometimes they will take a quick hit early in the day to distance themselves from their lives. During the rest of the day their begging cups will often be raided by the messengers who will leave them just enough to ensure they are back again the next day.

This is no harum scarum business. After so many years a sort of uncivil service has evolved, a system whereby few are at risk and the police know that any effort they make will almost certainly only catch one sorry soul with a minute amount. The fixer himself keeps himself high above all the nastiness. Other than that of his own private dispensing.

Any fool can diagnose a cold. Curing it is harder.

Having been witnessing this theatre of pain for over 20 years, allow me to recommend some medicine, Anything I recommend will be NIMBYism. I don’t like people dealing drugs outside my window and am primarily anxious that they go away. For my own sake. But there is also surely a broader issue. This Royal Mile is one of the significantly iconic places in Scotland, a country that relies on its tourist trade to a very large extent. Plus we would be doing no harm if we break that uncivil service. So what have I witnessed during those 20-plus years?

At the risk of hyperbole let me say that I have seen a gradual collapse in good and a rise in the bad, and that this has created an environment in which evil is more likely to prosper. Gone from the Mile are the smart shops and the paternalistic policemen. Instead we have over 30 tartan-tat emporia and an overstretched centralised police force who will tell you, with some justification, that they have little time or inclination to lock up the poor wretches who only just manage to keep themselves alive by selling the odd handful of drugs so that they can grab a mouthful themselves and so escape the horror of their lives for a few hours.

Let me briefly add that I know more than most that not every beggar is a drug dealer, that hundreds who have fallen through the ever-widening holes in our welfare system are being forced to beg for a few quid just to see them through. But that’s not my story today. Walking down the Mile this morning before writing this piece I was drawn to the conclusion that the council have now let things become so out of control that there is an atmosphere that borders on the evil, and evil begets evil.

It’s not just the wall-to-wall tartan tat shops. It’s the buskers whose songs are now allowed to be amplified to over 140db so that hundreds who are trying to either work or sleep in their offices and flats hear them whether they want to or not. Bagpipers have been known to play here for up to eight hours in a single day. I’m amazed the SNP haven’t stopped them. I sometimes dream of waking up English.

The shops whose unlicensed A-boards (I counted 21 this morning) clutter the pavements, the hideous street furniture and gaudy advertisements whose most blasphemous zenith is surely the one tacked onto a previously exquisite baroque church that advertises, without irony, that money changing is now available inside the former temple. Jesus. Come back.

Dear heaven, this is the Royal Mile. Our iconic masterpiece, our Eiffel Tower, our Empire State Building, our Taj Mahal, and we have let it become a living hell of shoddy shops, unsatisfactory copulations down side closes and unfettered commercialism. Isn’t it time we cleaned up the Mile?

So here are changes I would like to see.
1) Let's give our police better rights to move vagrants on, and encourage them so to do. Mayor Giuliani’s New York campaign against the homeless was far too strict but at least he had a vision, and it improved the lives of countless New Yorkers. It would dismantle the drugs chain on the Royal Mile in an instant.
2) Let's not have any nightclubs being allowed to be open after midnight if they are located within 50 yards of residential properties.

We were here first and the argument that we chose to live in the city centre doesn’t hold water. Hundreds of people were already trying to live and work in the Mile when the council decided to allow nightclubs that remained open till 3am (one of the main reasons for the drugs trade) and to take away their rule that amplified music was illegal. Let’s follow the example of so many other cities around the world and reintroduce that rule. Now.

Oh, and one other thing. If I finally lose my temper and get murdered in a fight with a busker, I don’t want any bagpipers at my funeral.

DAVID TORRANCE
Notebook
Cheers for Willie Rennie? Even he was embarrassed

WALTER HUMES
Diary
If the NOTA party was standing, it would get my vote

THEA CLANCY
New Voices
Staring at the ceiling: the reality of adolescent sex

CHRIS HARVIE
The Longer Read
For a vision of the Scottish problem, make your way to Crinan

KATIE GRANT
Favourites
A personal selection of things of value

Next edition of the Scottish Review: 11 May 2016
Sign up free