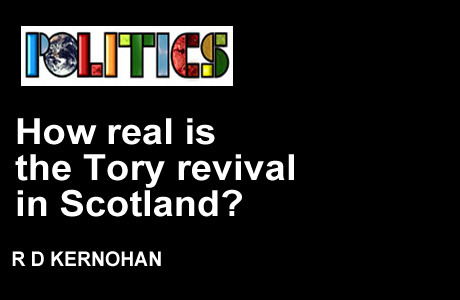 A usually reliable source of inspiration suggests that I might write on 'the remarkable resurgence of the Conservative Party in Scotland'. He assumes that I am pleased, and I am. But pleasure stops short of ecstasy. There is a resurgence but I am not sure how truly remarkable it is.

To double the party’s strength in the Scottish Parliament at Holyrood, to displace Labour as the largest and most effective opposition party, and to increase by more than 50% the Scottish Tory share of the poll at last year’s general election – all these were substantial achievements. And even those of us who did not vote for Ruth Davidson as Scottish party leader are now bound to recognise the pace, power, personality and good judgement with which she lit up a drab election and which she is likely to show again in her enhanced role at Holyrood.

She has also struck a good balance between two things needed for the harmony, morale, and efficiency of Scottish Conservatism – wholehearted commitment to the wider British Tory tradition and such distinctiveness as the new conditions of devolution make possible and expedient.

These successes have to be recognised, as they have been even in parts of the Scottish media which have recently felt compelled to qualify any mention of Tories with the most tediously strained of fashionable journalese adjectives: 'toxic'. But there have to be reservations in assessing both the extent and the sustainability of the Scottish Tory revival. There are also uncertainties, over which Ruth Davidson has no control, about the future direction of British Conservatism. Even if David Cameron wins the European referendum – which seems likely but far from certain – there will be an aftermath of recrimination, continued division, and disputed succession as well as all the pains and strains to be expected midway through a second term. The Tories should modestly improve their position at the next Scottish local government elections but it will be hard, with single-member constituencies and unfavourable boundaries, to match this year’s Holyrood progress at the 2020 general election.

There are also two difficulties in interpreting the extent of the revival from the recent Scottish results. The poll was still relatively low – 56% as against 85% at the referendum – and swathes of the two million Scots who voted against the SNP and for the Union were not won over or brought out even when the Tories made Nicola Sturgeon’s mixture of threat and bluster over a second referendum a major theme of the Holyrood campaign. Only a minority of Scotland’s pro-Union majority are yet prepared to vote for its firmest defenders. There is also some difficulty in interpreting the significance of tactical voting in this year’s results and even more in assessing it as a guide to future trends.

This year the tactical voting probably evened itself out, with the Tory constituency vote only slightly below the 23% for the list seats, a sound guide to the basic level of support. Some good Tories certainly voted Liberal and even Labour, especially in Edinburgh, Fife, and East Lothian – I have heard confessions – but the directly-elected Conservative MSPs also got the benefit when dislike of the SNP was more powerful than traditional preferences. Yet Scottish politics are far from any three-party electoral pact to frustrate the SNP, though that would be by far the most rational and effective course in the continuing post-referendum emergency created by the SNP’s bad faith.

Tactical voting will scarcely count under our local government voting system and it may still act against the Scottish Tories in 2020, as it has done in every general election since 1997. This year’s Tory vote of 524,000 was well up, even in a much lower poll, on the party’s showing in that annus horribilis (from which so many of our troubles derive) but it has still to reach Thatcherian levels. Even at the Iron Lady’s last fling in 1987, when she was already a little rusty, she had 713,000 voters in Scotland. The suppler Ms Davidson has still some way to go.

But statistics are shaped by a mixture of credibility, competence, and opportunity. The Scottish Tories have begun to look more credible. Ruth Davidson’s style of competence seems more interesting to the half-converted than Annabel Goldie’s was and she has had and will have more opportunities. The SNP has grown arrogant and its ruling junta has been trapped in the way that threatens all over-confident governments. It has both encouraged and attracted opportunists and hangers-on, some with economic or careerist motives, others with disinterested obsessions, whether about fracking, football chants, GM crops, or 'named persons' who are supposed to decide what makes for happy children. In such situations politicians who think they are manipulating events may find themselves being manipulated and one of the roles of opposition is to force governments to think more clearly or think again.

The Scottish Tories should now have the numbers and talents to do that, as well as to confront the arrogance of the SNP in its refusal to accept the result of a referendum intended to shape and settle Scotland’s future. The driving force of the SNP since it first formed a minority government at Holyrood has been a belief, often justified by history, that revolutions are the work of zealous minorities who drag an uneasy and uncertain majority behind them. There is now a chance for Ruth Davidson to show that an equally determined minority can lead a counter-revolution and rid Scotland of the culture of grievance, blame, and complaint so evident in both the political style and turn of phrase of the present first minister and on the flip side of her predecessor’s record of bonhomie and good will.

But it is still only a chance. The Tory revival has not gone far enough to dispel the malaise which has afflicted much of Scotland since it lost faith in 'New Labour'. It has consolidated its support among those, mainly 'middle-class voters' if that term retains any validity, who rightly fear that devolution may be misused to commit Scotland to higher taxes than the rest of the realm has to bear. But its strength remains very feeble in old industrial areas where it was once substantial.

Even though there may be enough Tories and talents to change the mood at Holyrood, it will be hard for an opposition party half the strength of the governing one, and without the resources of civil servants and quangos behind it, to have sufficient influence on the continuing problems of Scottish education, the gathering storms over the health service, and the imperfections of the council tax.

We must also wait and see how coherent and courageous the Tories will be on devolved aspects of welfare and benefits policy, where the nearest thing to a Scottish consensus is that more should be spent but someone else should pay for it. They will not be popular if they speak some home truths too plainly and challenge the fashionable but uncritical enthusiasm for that most elusive of political and social chimeras: 'equality'. Equality and fairness are not the same thing. More social mobility will probably mean more inequality. The widening of opportunities will not eliminate poverty unless people choose to take them, accepting changes in lifestyles for themselves and working for them in their communities.

Ruth Davidson has done a good job and her team has been much strengthened, but her work has hardly started.

KENNETH ROY
Home
Into the wilderness: the men in Nicola Sturgeon's Scotland

GERRY HASSAN
Essay
Why does football matter so much in Scotland?

JEAN BARR
Favourites
A personal selection of things of value

ANTHONY SEATON
Politics
Though I'm in, I want to shake it all about

R D KERNOHAN
Politics
How real is the Tory revival in Scotland?

RACHEL MACPHERSON
New Voices
I have the power to delete myself, but I can't
do it

Next edition of the Scottish Review: 1 June 2016