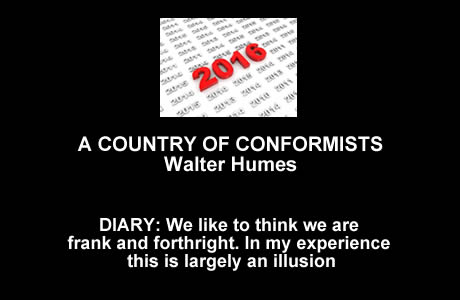 Wednesday 2 March
Preparing for a lecture I am due to give next week, I try to update my knowledge of current thinking on social class. 'Class’ is a term that most politicians now prefer to avoid. In line with the current preference to put a positive spin on everything, they tend to use such euphemisms as 'social inclusion’, a much cosier alternative which makes them feel good about themselves, even if it does nothing for those at the bottom of the social scale.

I soon discover that traditional classifications, based principally on occupation, are considered inadequate. Although there is quite a sophisticated analytic version of this approach (the National Statistics Socio-Economic Classification), which involves eight categories ranging from 'higher managerial and professional occupations’ to 'never worked and long-term unemployed’, many commentators argue that it needs to be supplemented by other conceptual tools.

One of these is the idea of different types of 'capital’. People not only possess varying amounts of economic capital (inherited wealth, property, material goods, etc). They can also benefit from social capital and cultural capital. The first of these refers to the extent to which individuals are 'connected’ to society. Are they members of organisations and networks which produce beneficial contacts with others who share similar values? Such transactions involve reciprocity, trust and mutual cooperation. Those who possess significant amounts of social as well as economic capital feel they have a secure place in society.

Cultural capital refers to non-financial assets that may bring status and allow for social mobility. It includes such things as speech, style, knowledge of books, awareness of the arts and engagement with ideas. I used to have a colleague who came from a modest background but who often said that he was very grateful to his parents for enabling him to acquire cultural capital from an early age. There were books in the house, he was encouraged to join the library, taken to the cinema and theatre and along to the town hall to hear visiting speakers.

The supplementing of occupational categories with information about different forms of capital enables a more sophisticated version of social class to be developed. One model uses labels such as 'elite’ (high levels of all three capitals), 'technical middle class’ (strong on economic capital but relatively weak on the other two) and 'precariat’ (the poorest and most deprived class, with low levels of all three capitals). It also enables changes in patterns of work to be accommodated, such as the decline of the traditional working class (as many jobs in manufacturing go abroad) and the rise in poorly paid service workers.

All I have to do now is relate these ideas to the central theme of my lecture – social disadvantage and educational achievement. But I think I’ll leave that for another day.

Thursday 3 March
It’s official. People in Scotland can rely on senior figures in public bodies to tell the truth. Do I detect a sceptical eyebrow being raised? Have no fear. Last week the Public Petitions Committee of the Scottish Parliament rejected a proposal to include 'lying’ in a list of items regarded as examples of maladministration. The submission was made on behalf of Accountability Scotland, an organisation which seeks to ensure that public bodies have fair and robust procedures in place to investigate complaints. On several occasions it has been less than satisfied with the service provided by the Scottish Public Services Ombudsman (SPSO).

When the original Ombudsman legislation was being taken through the UK parliament, the then Leader of the House, Dick Crossman, gave the following examples of maladministration: 'bias, neglect, inattention, delay, incompetence, ineptitude, perversity, turpitude and arbitrariness’. The petitioner in the current case, Richard Burton, wanted the Crossman catalogue, together with 'lying’, to be added to the Scottish Public Services Ombudsman Act of 2002. A previous attempt to get a direct answer from the head of the SPSO, Jim Martin, failed to produce a satisfactory response. He simply said that 'we would criticise a body who provided inaccurate or misleading information’. Questioned several times by a member of the public, the SPSO advice team refused to say whether lying was treated as maladministration.

It is not exactly surprising that a group of politicians should be reluctant to add lying to the list of offences. It is regarded as 'unparliamentary language’ and MPs and MSPs who accuse other members of telling lies are required to withdraw the statement and may find themselves subject to disciplinary proceedings. Politicians are often adept at evasion, obfuscation and misrepresentation, conduct that can come perilously close to lying, so they perhaps have some fellow feeling for senior staff in public bodies who are inclined to veer in the same direction. The petition was dismissed without discussion. (In the subsequent written record it is stated that it was rejected on technical/legalistic grounds.) What is the conclusion that we are expected to draw? Presumably that important people like MSPs and chief executives of public bodies can be trusted to behave ethically. Aye right.

I should declare an interest. I am a member of Accountability Scotland, though not a particularly active one. I was not involved in any way in the latest submission to the Public Petitions Committee. I do, however, have a long-standing interest in the performance of Scottish public bodies (including the SPSO) and am not inclined to share their self-image as reliable stewards of the principles of democracy and justice. Eileen Reid recently wrote a powerful piece in SR about what she saw as a state of denial within the Scottish educational establishment. Similar critiques could be extended to the health service, the legal profession and local government.

Saturday 5 March
At this week’s Scottish Conservative Party conference, Ruth Davidson expressed the hope that her party can replace Labour as the main opposition to the SNP, following the Holyrood elections in May. It’s an ambitious target and, if achieved, would represent a seismic shift in Scottish politics.

Ms Davidson is personally quite popular, even among those who would not regard themselves as sympathetic to the Tories. She is regarded as lively and competent, with an engaging sense of humour. It is questionable, however, whether these qualities will be enough to overcome the negative image of the Conservative Party held by many Scots. They see it as representing the interests of financial spivs and the landed gentry more than those of ordinary folk. And there are still some Tory relics from the past who pop up from time to time reminding voters of the Thatcher era.

Norman (now Lord) Lamont – not exactly the most distinguished ex-chancellor of the exchequer – recently joined the EU referendum debate supporting the 'Out’ campaign. Another throwback to the 1980s is Michael (now Lord) Forsyth who, in a competitive field, would be strong contender for the title of the most unpopular secretary of state for Scotland of all time. If Ruth Davidson can overcome these disadvantages and see her party make significant progress, if not overtake Labour, she will certainly enhance her reputation and perhaps stimulate some much-needed movement in the Scottish political scene.

Sunday 6 March
Watching the Oscar-winning movie, 'Spotlight’, which portrays the failure of the hierarchy of the Catholic church in Boston to deal honestly and compassionately with the many case of child sexual abuse by priests, I was particularly struck by one part of the story. The editor of the Boston Globe, the paper which investigated the scandal and reported its shocking findings, was described as an 'outsider’, someone who didn’t really understand the powerful networks which operated in the city – and which had given the Catholic church its previously unchallenged authority. But it was that very quality of being an outsider that enabled him to stand back from a cosy and collusive culture, in which a quiet word was normally sufficient to suppress anything that might be awkward or embarrassing. Anyone who wished to get on in Boston society quickly learned the rules of the game.

I have often thought that Scottish society would benefit from having more outsiders, people who were prepared to question the orthodoxies of politics, the professions and the academic world. As Scots, we like to think we are frank and forthright. In my experience this is largely an illusion – Scottish public life is full of conformists, men and women who are only too anxious to give those at the top 'their place’, whatever private reservations they may harbour. It is not a desirable state of affairs, either in relation to the psychology of individuals or, more importantly, in relation to the health of the nation.