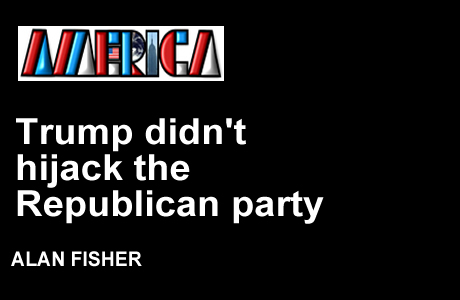 With his thumping win in Indiana, and his confirmation as presumptive Republican nominee, Donald Trump now effectively leads the US Republican party. In doing so he’s embarrassed pundits, pollsters, journalists and talking heads who told everyone that Trump would and could never win. They failed to see the anger Trump was able to tap into. They didn’t for one moment realise that some of the resentment was aimed at them.

The people had given Republicans power. They control the US Senate and US House of Representatives, but in the eyes of many who support the party, they had done nothing to stop what they saw as the excesses of the Obama administration. The middle class has struggled over the past eight years – wages have hardly risen. Republican politicians promised to solve illegal immigration, cut waste and fraud, and deliver a balanced budget. They have not delivered.

While it was assumed that the 'Republican establishment' would somehow restore order to the nominating process, there was no recognition that most of the votes in the primaries were being picked up by anti-establishment candidates. And now some senior Republicans claim that Trump has 'hijacked the party'. They say he’s rude and vulgar. He even talked about the size of his penis during a debate. They say he simply makes things up. He claimed that thousands of people celebrated in New Jersey when the twin towers came down in the attacks on 9/11. They didn’t. And they say he isn’t a real Republican – that he doesn’t hold Republican values.

Yet many of these same people refused to take on Donald Trump early enough to blunt his momentum. He was at the forefront of the 'birther' movement, claiming that Barack Obama was not born in Hawaii as he claimed and did not have a US birth certificate. That, he alleged, would disqualify him from office. It was a clear attempt to delegitimise the first black president. Remember here that the Republican Party is overwhelmingly white. Few senior Republicans challenged the racist myth, even when it was disapproved. In fact, well-known faces such a Sarah Palin, Newt Gingrich and Michelle Bachmann stoked the fire.

When Trump launched his presidential campaign, he claimed that Mexican immigrants were criminals, rapists and murderers. Very few Republicans spoke out. He then announced that he would ban all Muslims from the US until the leaders worked out 'what is going on'. There were those who claimed that it was unconstitutional while others in the party wanted to go further and patrol 'Muslim neighbourhoods' in the US. But the voices of opposition were muted.

He initially refused to renounce the endorsement of a former imperial wizard of the racist Ku Klux Klan. And he retweeted a graphic with fake statistics about black people murdering whites. These positions have been dismissed as not in line with Republican values. Yet a look back shows how Republican presidential candidates Barry Goldwater in 1964 and Richard Nixon in 1970 fuelled southern resentment at African American advances in coded language. It formed the basis of what became known as the party’s southern strategy.

George H W Bush won a presidential election against a weak Democrat in Michael Dukakis, in a campaign best known for an ad that is widely regarded as racist. And in 2000, George W Bush was happy to deliver a speech at Bob Jones University which banned interracial dating at that time.

Donald Trump wasn’t created by the Republican party. He didn’t hijack it either. He speaks openly and plainly. And that responds to its fear, its anger and its impulses.
When he talks, people cheer. And despite the few voices of dissent and concern, that’s where the Republican party is today.