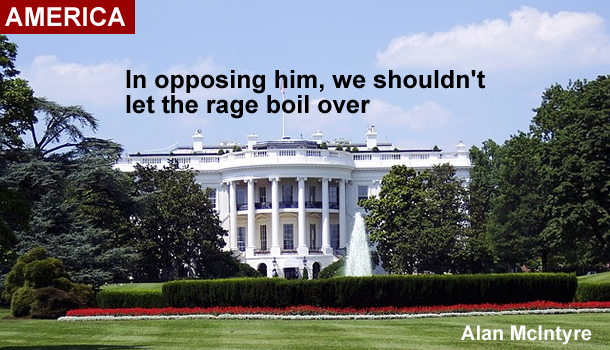 Under Article 2 of the US constitution, the transfer of executive power requires nothing more than the new president taking the oath of office at noon on 20 January. But over the course of 58 inaugurations, this simple ceremony has accumulated the layers of tradition, symbolism, and pageantry we witnessed last Friday.

From George Washington deciding in 1789 that it was appropriate to give a speech to Congress, to Reagan moving the proceedings to the West Front of the Capitol in 1981 so that he could give his speech looking down the length of the National Mall, the inexorable trajectory has been towards an ever more imposing celebration of American democracy. Of course in extremis, the ceremony can revert to simplicity, as we’re reminded by the indelible 1963 image of LBJ standing in the crowded cabin of Air Force One reciting the oath of office beside a still blood-spattered Jackie Kennedy.

Friday’s choreography was barely distinguishable from Obama’s two inaugurations, but like almost everything else about his political life thus far, Trump’s style and tone was very different. His speech will not ring out through history like Lincoln, FDR, and Kennedy. There was no 'we have nothing to fear but fear itself' moment. At 16 minutes it was very short, although not a patch on Washington’s second inaugural, which was a pithy 135 words. Instead of high-flying and poetic rhetoric, we had punchy staccato sentences summarising the economic nationalism he rode to the White House. To the undoubted dismay of America’s allies, he also outlined his 'America First' foreign policy stance, complete with its isolationist overtones from the 1930s. With its clenched fist visuals and its campaign-like tone, there wasn’t even a passing attempt to broaden his appeal beyond the minority coalition that elected him.

But Trump’s bleak imagery of carnage on the streets and tombstones of rusting factories bears little relation to the current facts. Crime is at historic lows, unemployment is below 5%, and we are at last seeing strong growth in real incomes, but Trump’s grim dystopian worldview was perfectly consistent with his campaign rhetoric of a broken country that only he can fix. It was a strident, dark, and sobering statement of his intent to change America and the world, including a laundry list of grandiose promises like the eradication of Islamic terrorism. His decision to take the oath with his hand on the Lincoln bible could be interpreted as an act of reverence for arguably America’s greatest president, but it reminded me more of the fact that Lincoln’s first inauguration was followed by a bloody national schism
that left 600,000 Americans dead.

Not only did Trump’s inauguration lack the positive celebratory feel of the Obama transition, it also felt small, and almost like a hostile takeover of the government against the will of the people rather than in service of them. Despite the inevitable preening and posturing about being the 'greatest inauguration ever' and the new press secretary’s whining about biased media coverage, the truth was that in historical terms no one showed up. It both literally and metaphorically rained on Trump’s parade. Estimates of the crowd on the Mall put it at about a third of that for Obama in 2009, and the
grandstands lining the route from the Capitol to the White House were sparsely populated at best. One measure of the lack of interest was that only 200 bus parking permits were issued for Friday’s event, versus 3,000 in 2009.

It’s normal that between the election and the inauguration a president’s approval rating rises as the country rallies around its new leader. So it’s ironic that an overtly populist president enters office with the lowest approval rating since a pollster first thought to ask the question. The most telling statistic of the weekend may be that there were 1,200 bus permits issued for the women's march on Washington on Saturday, the epicentre of a network of events that attracted over two million protesters in the US alone and many more internationally.

The feeling of smallness extended to the broader celebrations around the inauguration. Rather than Beyoncé and Springsteen, the pre- and post-ceremony events were populated by a bunch of B and C list celebrities scavenged from the dollar stores of the American entertainment industry. There were certainly a lot of great military bands, but short of requesting a combat posting, there really wasn’t much they could do to get out of it. In contrast to the 10 formal inaugural balls attended by the Obamas and the 14 that party boy Bill Clinton visited in 1993, the Trump and Melania dance card only had three stops on it. The new administration tried to make a virtue of it by claiming that this reflected the lack of big money donors seeking to buy influence in DC, but the reality was that a whole bunch of the traditional state balls were cancelled due to a lack of interest.

So what now? For guidance I’ve turned to Alcoholics Anonymous, not because I fear for my sobriety over the next four years, but because in the 1940s the organisation adopted Reinhold Niebuhr’s serenity prayer as its mantra:

Even those not on the temperance wagon would do well to pay attention to this advice. Top of the list of 'things we cannot change' is Trump himself. Friday was never going to be a 'Road to Damascus' moment, not least because he’s the oldest person ever to take the oath of office. He was, is, and will remain a thin-skinned, reflexively petty, and vengeful narcissist. Anyone who thinks that assuming the presidency will humble him hasn’t been paying attention for the last 18 months. This is a man untroubled by self-doubt who will not unilaterally disarm by shutting down his Twitter account. Having pulled off possibly the most surprising election victory in history, he has no reason to second guess either his behaviour or his policies.

Another 'thing we cannot change' is that, unless a smoking Russian gun
appears, Trump is the legitimate president. However scary it may be, he will govern, he will make policy, he will interact with the international community (starting with Theresa May on Friday), and he will shape the direction of this country for the next four years. People traumatised by that prospect need to uncurl from the foetal position that many of them have adopted since November, dry their eyes, stop wallowing in Obama nostalgia, and move on to being an effective opposition. Speeches like Meryl Streep’s at the Golden Globes calling the arts world to arms may be cathartic, but they achieve precisely nothing, because she’s not engaging with the people who actually
elected Trump. The 65 Congressmen who boycotted the inauguration had
every right to protest, but I tend to agree with jazz legend Wynton Marsalis, who in response to accusations from younger musicians that he wasn’t sufficiently riled up about the election quipped: 'As far as protesting goes, I did that on November 8th when I voted. Now I’m going to wait for him to actually do something that I feel should be protested against'.

The part of the serenity prayer that talks about having the courage to change the things we can, might be better rephrased under Trump as the courage to protect the things we can. A new head of state has been transplanted onto the body politic of America, and like any organ transplant, there’s a risk of infection, so there’s an ongoing need to monitor the vital signs of our democracy. Obama pointed the way in his farewell speech in Chicago, where his message was one of acceptance – 'we’ll be ok' – but also that we shouldn’t take democracy for granted, and that we need to be 'anxious jealous guardians' of it.

This means being focused on fundamental issues like voting rights, freedom of the press, and the rule of law. The portents aren’t good, when the second executive action of the new administration on Friday was to delay prosecution of a federal voter discrimination case in Texas. Right out of the gate, this is an example of where generic outrage needs to be replaced by focused opposition. Luckily, the fragmented nature of the US government creates a natural immune system to fight these types of infections. Although Congress may initially be a Trump lap dog, it has tremendous power to block his agenda, particularly if continued low approval ratings give Republican senators the backbone to oppose him. Likewise, big Democratic states like New York and California have already indicated their intent to play the role that Texas did against Obama; using their own legal and regulatory powers to counterbalance the power of Washington. Gavin Newsom, the lieutenant governor of California, has already promised that any attempt to build a border wall or increase deportations in his state will be immediately wrapped in a smothering blanket of red tape.

Sometimes the democratic immune system needs a little boost. The antibiotics of democracy are grass roots organisations that can stand athwart an authoritarian power and shout stop. So the Democratic party
also needs to harness the energy of protests like the woman’s march on
Washington to win back town halls, state legislatures and governors mansions over the next four years. The polls continue to show that Obama’s legacy is an America that is more liberal, inclusive, and tolerant than it was a decade ago, so properly orchestrated, popular opinion will be a powerful bulwark against Presidential excess.

Another Vitamin C boost for the immune system of democracy is a strong press at all levels capable of telling truth to power. The much maligned mainstream media needs to put down the Valium, play a positive oversight role, and avoid self-inflicted wounds from the sharp objects of click bait sensationalism. CNN didn’t actually publish or even link to the Russian Pee-gate dossier, but it didn’t prevent the network being side-lined and belittled by Trump at his pre-inauguration press conference. Rather than throwing half-cooked BuzzFeed spaghetti at the wall to see what sticks, professional journalists need to keep digging, as there is undoubtedly going to be Pulitzer Prize gold in the hills of the Trump presidency.

Finally, we need 'the wisdom to know the difference' between that which we should accept and that which we should seek to change or protect. It’s going to be hard. Trump’s recent criticism of civil rights icon John Lewis was a lightning rod, but it also consumed news cycles that could have been devoted to vetting important cabinet appointments. To parse the difference between acceptance and protest, anyone concerned about American democracy needs to understand that Trump is by nature a counter-puncher. So opponents need to take a deep breath, take a step back, and ensure they’re throwing knockout haymakers on things that matter, not weak jabs about outrageous tweets.

It’s easy to get depressed, disillusioned and angry about where we find ourselves, but as America looks to the next four years, I think New York Times columnist Paul Krugman nailed it. His advice was that to protect what is best about America, we need to 'keep the rage on simmer and don’t let it boil over'. With executive orders to raise housing costs and limit Obamacare among Trump’s first acts, it’s probably time to go put that pot on the stove.