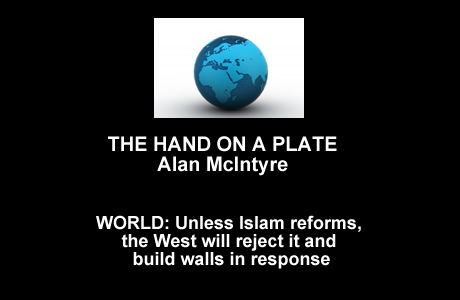 When 15-year-old Anwar Ali raised his hand in January at his local mosque in Pakistan, he made a mistake that we’ve all made at some point. Maybe he was thinking about what was for dinner, maybe he was daydreaming about playing cricket, but whatever the reason, he clearly wasn’t giving his full attention to the present.

When the Iman asked who didn’t love the Prophet, Anwar’s was the solitary hand that shot up from the crowd; a crowd that immediately turned on him and accused him of blasphemy. What followed may have been a pre-emptive act to escape a death sentence, or maybe it did arise spontaneously from pure religious devotion, but whatever the motivation, Anwar went home and hacked off his offending hand with a scythe. He then returned to the mosque with his bloody hand on a plate and presented it to the Iman in an extravagant act of contrition.

Instead of being appalled by this remorseful self-mutilation, Anwar was lauded by both his Iman and his parents as a shining example of a young man truly devoted to Allah. While Anwar briefly grabbed the headlines, he’s hardly an isolated case of self-harm in the dark shadow of strict Sharia law. In an equally extreme example of religious masochism, an Egyptian Muslim self-amputated both his hands in 2013 by placing his wrists across a train track, believing that an absence of fingers would once and for all control his impulse to steal.

Back in Pakistan, when 19-year-old Saba Qaiser snuck off to marry her boyfriend in 2014, her father and uncle tracked her down, beat her senseless, shot her in the head, and threw her into a river. Amazingly she survived this ordeal, and a documentary about her experience may well win an Oscar this year. Saba’s story has been captured for posterity, but she is just one of over a thousand honour killings a year in Pakistan and maybe five or six times that number in the broader Muslim world. Behind each of these statistics is a close relative who felt compelled by a toxic combination of scripture and tradition to kill a family member in order to remove a stain on their collective honour.

When Saba had the bravery to pursue her father through the Pakistani courts, his defence was simply that 'he did the right thing’ and 'was now much more respected in the community’. Often these family honour vigilantes are not prosecuted, because the families of the victims close ranks, forgive the culprit, and refuse to press charges. Despite the brutality she endured at his hands, even Saba was convinced by her new husband’s family to drop the case against her father.

These two teenage tragedies are appalling in their own right, but they also highlight how the ongoing religious radicalisation of Muslims is undermining what in the West has been a long journey towards greater tolerance and inclusion. When we read about the crowds of young Muslim men surrounding and sexually assaulting woman at Cologne train station, we don’t equate it to the misogyny that takes over many British High Streets on a Friday night after the pubs close.

Instead we project onto these crowds of immigrants a radicalism that, when left unrestrained, morphs into self-righteous acts of mutilation, filicide and martyrdom. We’ve become used to looking around Scotland or the US and seeing Muslims integrate into Western society as generations of immigrants have done before them, and we’re no longer shocked when a second or third generation Muslim Pakistani opens his mouth and a reassuringly broad Glaswegian accent emerges. But when we look at the penitent Anwar and at the savagery of Saba’s father, we see something very different, and something that the vast majority of Western Europeans truly don’t understand. Masked to some degree by the strident voices of raw xenophobia and tribalism, this strong sense of otherness and the deep unease that comes with it, is what will ultimately undermine the efforts of Angel Merkel and others who are trying to respond to the European migrant crisis with humanity and a generosity of spirit.

Ironically, it’s easier for many of us to understand the motivation of Muslim terrorists than it is to put ourselves in the heads of self-mutilators and child killers. We’ve been conditioned by decades of political terrorism to accept that strongly held beliefs often manifest themselves in violence against innocent strangers. So while the self-proclaimed martyrs of 9/11 are justifiably condemned and vilified, conceptually their actions aren’t that far away from every IRA car bomb that went off in a crowded Belfast shopping centre or Birmingham pub.

The barbarism of ISIS burning a Jordanian pilot alive in a cage horrified us all, but it doesn’t take a comparative historian to point an accusing finger at Auschwitz and see similar evil at work. But in all of these cases we seek to find solace in them as the isolated acts of zealots and fanatics. What is truly scary about the stories of Anwar and Saba is the creeping radicalisation of the Muslim majority and with it the normalisation of what we would consider extreme behaviour.

The further irony is that despite the crusader propaganda of ISIS and Al Qaeda, this radicalisation has been nurtured and propagated from within the Muslim world itself for very familiar political and secular reasons. While Islam has always had a history of brutal punishment for moral infractions, until recently these punishments were largely a deterrent and convictions were rare.

In the first 38 years of Pakistan’s existence as an Islamic state, the courts only prosecuted 14 cases of blasphemy, whereas in the last 30 years there have well over 1,500. In 2015, Saudi Arabia executed 158 people, which was a 20-year record, but a record that 2016 is on track to beat. What started as a convenient way for the House of Saud, the Mullahs in Tehran, and the Pakistani generals to settle scores, cow the population, and whip up animosity against the Great Satan of America has now spun out of control.

The relentless propaganda, the suppression of religious dissent, and the skewing of Islamic scripture to emphasise both jihad and strict Sharia law has created a psychological feedback loop. A feedback loop that is now causing large portions of the population to truly internalise the message. The result has been to take what had been minority fanaticism and bring it into the mainstream of Islam in a way that not only gives birth to the terrorists of Paris, but also to daily barbarous acts in the name of Allah within the Muslim community itself.

The challenge that Western politicians need to grapple with is that many otherwise moderate voters recognise that this is not about Muslims being different in the superficial sense of being allowed to wear a hijab in public, speaking the same language, or even having a tradition of slitting the throats of live animals. It’s about the deeper cultural norms of behaviour that underpin the social contract and that allow a pluralistic and diverse society to also be a tolerant society.

As Adam Smith so eloquently pointed out in his 'Theory of Moral Sentiments', a moral society requires us to be able to walk a mile in another man’s shoes and to understand their motives, even when we don’t agree with them. The enemy of that empathy is the chasm that separates my world-view from one that would motivate me to hack off my own hand or brutally kill my own daughter for the sake of family honour.

As human beings, our psychology of revulsion and rejection spans a wide spectrum. At one end is the intellectualised fake outrage of extreme political correctness. At the other end of the spectrum you have the stuff that happens deep down in our reptilian brains – the instinctive reactions to rotting food and incestuous sexual relationships that have been hard-wired by evolutionary biology to protect us from real harm. Sitting between these two extremes is a layer of behavioural conditioning that comes not from evolution, but from our upbringing and our societal norms.

Despite being socially conditioned, many of these reactions feel just as instinctive and hard-wired as some of our baser reflexes. Having journeyed a long way to build more tolerant and inclusive societies that override those reflexes, the danger is that the rise of radical Islam is now triggering a conditioned response over which many of us have little control. I would argue that it is this deep-seated rejection of behaviour that we truly don’t comprehend that is being harnessed by populists like Donald Trump and Marine Le Pen for their own political benefit.

Yes, the history of Christianity is filled with the burning of heretics and bloody self-flagellation, and the occasional maniac in the US will still kill an abortion doctor in the name of Jesus, but despite the rise of Ted Cruz, the US is not sliding towards a violent theocracy. The truth is that for all its flaws, the recent social and moral trajectory of the US and Western Europe has been positive, while for many the high watermark of Muslim tolerance was when the Moors welcomed displaced Jews to Spain a millennium ago.

There are hundreds of thousands of desperate migrants clawing at the borders of Europe who would love for their children to have the opportunity to develop broad Glaswegian accents. But without some sort of true religious reformation in Islam, I’m afraid the prospects for a resolution of the short-term European migrant crisis and a return to medium-term political stability in the Middle East seem remote. While we are waiting for that reformation to occur, the Anwars and Sabas of the Muslim world will continue to suffer, and the danger is that the West will increasingly reject the belief system that promotes that suffering and will build walls in response.