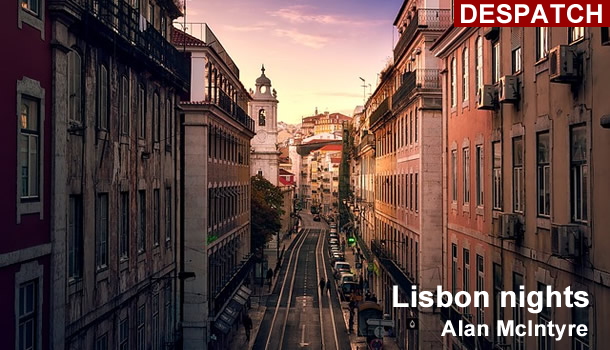 Nothing beats arriving in a new city just after dawn. The neutron bomb of sleep bares the bones of the place, leaving it uncluttered by scurrying and congestion. In many European cities, the uniform white roller shutters on the apartment buildings amplify the slumber effect; metal eyes tight shut against the light of a new day creeping down the facades. As a curious outsider, you get to observe it all in peace, protected from reciprocal scrutiny by the early morning hour.

One of the few benefits of my frequent red-eye flights from New York to Europe is that I often get to be up before the locals. In the winter months, Europe's morning darkness is indistinguishable from the American evening I've just left. But in the spring, there's a window where my eastbound flight meets the westbound sun right around the time I'm landing. In late April, I was lucky enough that my travels took me to Lisbon for a three-day banking technology conference.

Despite being to Portugal several times, I'd never been to Lisbon, so it was a chance to check one more box on my capital cities bingo card. Stepping off the plane at 1.30am New York time, I was a little dazed, but it didn't take long for an unexpected blaze of colour in arrivals to put a smile on my face. Six centuries of Portuguese colonial heritage brought to life by the towering dyed headscarves on the women just landed from Angola and Mozambique, and the matching Brazilian football jerseys on a bunch of excited teenage boys, presumably just in from San Paulo or Rio.

I also discovered that one of the pleasures of visiting Lisbon is that its international airport is still pretty much in the middle of the town. You're not quite banking between skyscrapers to land as you used to in Hong Kong, but one minute you're on final approach staring down at the famous red-tiled roofs, and the next minute you're on the runway.

Plans were announced in 2008 to relocate the airport 30 miles outside the city, and construction did break ground in 2010, but in 2013 the whole thing was shelved, and instead the current site was expanded and upgraded. They must be doing something right, as it's been nominated nine straight years to the shortlist of best airports in Europe. For someone who spends an inordinate amount of my time at the third world airport that is New York's La Guardia, it all made a great first impression.

Despite being close to 7.30am by the time I jumped into a cab, the streets were empty, and we careered along at 30 to 40mph with the taxi driver blasting opera from the radio while tapping out the libretto on the roof of the car. Because of the airport's location, you're not on a bland motorway for 30 minutes. Instead you're immediately on a grand boulevard with large detached buildings on either side that channel you down into the heart of the city. Unfortunately, many of the beautiful buildings seemed to be half-finished renovations where the builders knocked off for lunch sometime in 2010 and never came back.

My lazy assumption regarding the paucity of traffic was that it reflected lazy Latins who couldn't get themselves out of bed at a reasonable hour. But when I floated my one-word description of the city as 'quiet', my cabbie informed me that it was in fact Freedom Day, a national holiday to commemorate the 'red carnation' revolution of April 1974; a broadly peaceful military coup that ended authoritarian dictatorship and returned Portugal to democracy.

Embarrassed enough to consult Wikipedia while still in the cab, the one fact that will likely stay with me forever is that the secret signal to start preparing the coup was when the Portuguese entrants in the Eurovision song contest (being held in Brighton) started to sing. Despite playing their unwitting part in initiating an almost bloodless regime change, the brave Portuguese troubadours were vanquished that night by the mighty ABBA, who also unwittingly played their part in the Waterloo of the dictatorship.

After showering and changing, I ventured outside to get a coffee at a street cafe. Having slept through breakfast on the plane, I also wolfed down one of the 'pastel de nata' custard tarts, which would clearly make a far better international Portuguese franchise than Nando's chicken. Sitting outside in a little sun dappled square, the look and feel of the city reminded me of a recent trip to Athens. Lisbon has that same sense of a rich and broadly affluent history that's been graffiti-washed by short-term economic disruption.

There's construction, but there's also many vacant lots where mounds of dirt have years' worth of vegetation growing on them, and many of the buildings in the city centre have a shabby chic look, where a fresh coat of Dulux wouldn't go amiss. Even the pavements seem to tell the story of economic disturbance. Many are covered by beautiful small stone mosaics, but a lack of attention and maintenance has caused them to buckle and crack, as if the Eurozone crisis was a literal as well as financial earthquake rippling under the city.

Like Greece, Spain and Ireland, Portugal got hit hard by the Eurozone crisis and earned its dubious place among the PIGS group of countries. As concerns rose in 2010 about the ability of Eurozone members to pay their public-sector debts, government bond rates spiked, leading to Portugal taking a €78 billion bailout from the troika of the European Commission, IMF and ECB. With the bailout came a mandate for strict fiscal austerity; policies that are now widely regarded as having done far more harm than good, and which condemned Portugal to three years of penal recession.

Although the economy is now growing, and its bailout repayments are ahead of schedule, GDP is still 6% smaller than it was in 2008, and public-sector debt remains the second highest in the Eurozone after Greece. While the economic recovery is real, it's also fragile. When growth temporarily slowed in 2015, bond rates spiked immediately, indicating that international financial confidence is probationary at best.

Like other countries that took the austerity medicine, income inequality has also increased, and 27% of the Portuguese population now live below the poverty line. While unemployment has gradually come down from a peak of nearly 17% in 2013 to now just under 10%, youth unemployment remains stubbornly high at 23%, which may explain the mid-morning skateboarders trying to navigate the steps in the corner of the square.

Despite the economic challenges, many people in Lisbon still work hard to keep up appearances. My hotel's concierge had creases in his suit sharp enough to open letters, and the middle-aged Uber driver who picked me up one night wore a crisp white short-sleeved shirt and black tie. I didn't crane over to see if there was also a black peaked cap lying on the front passenger seat, but he was clearly determined to bring some dignity to his small role in the Lisbon gig economy, and at least behave as if his immaculate Seat hatchback was a stretch limo.

While my days were spent in a soulless conference centre down by the Tagus river dealing with some occasionally soulless bankers, my Lisbon nights afforded an opportunity to soak in a little more of the history and atmosphere of the city. One of the evening events was in the 15th-century Beato Convent, in which the high stone walls of the garden once allowed the nuns to take their exercise in seclusion.

Despite being in the middle of the city, its walls are still high enough to stop the surrounding apartment blocks intruding and instead the walls framed only a canopy of stars. As the evening wore on, the atmosphere was further enhanced by a traditional Portuguese Fado singer. Despite the language gap, the stories were instantly recognisable to any fan of country and western music as ballads of betrayal and lost love on the Iberian Peninsula.

The gala dinner on the second night of the conference was in the Carlos Lopez Pavilion, located in the Edward VII Park with sweeping views down to the Tagus. Despite Brexit, the Portuguese are unexpectedly proud of having the world's longest international alliance with England, inaugurated by the Treaty of Windsor in 1386. When King Edward stopped by in 1902 to pay his respects, he obviously made a good enough impression that they named a rather grand park after him.

The building itself – which turned out to be like the Kelvin Hall in Glasgow only with better tiling – commemorates a marathon runner and the first Portuguese athlete to win an Olympic gold medal in 1984. Its primary qualification for hosting the event appeared to be that the cavernous main space could seat over 1,000 for dinner and still have room for the local variant of Cirque du Soleil.

The more interesting historical titbit that I picked up from a plaque on the wall was that the building was originally the Portuguese pavilion at the Rio de Janeiro Expo in 1920. In a feat of imperial hubris and logistical exuberance, the whole thing was shipped from Lisbon, assembled in Brazil, and then shipped back across the Atlantic to its current location.

The following morning, it was off back to the airport and my return flight to New York. This time I got to experience the real rush hour rather than the public holiday version. My parting impression was of a vibrant and proud city getting back on its feet after taking a standing eight count from the referee. I'd love to spend more time there, as three days clearly doesn't do it justice, particularly when a large portion of my time was spent discussing banking technology, rather than drinking port and eating pleasantly burnt custard tarts.