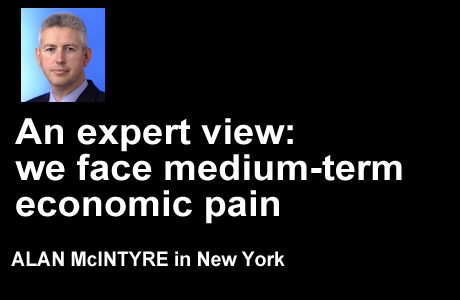 When you’re young, uncertainty is often a source of excitement. The anticipation of an unridden rollercoaster, the nervous fumbling of a first date, and the beckoning of an envelope full of exam results lying unopened on a kitchen table. As you get older the predictable gradually becomes your friend and trusted companion. If visits to the doctor involve the unexpected, they don’t tend to end well. If you are blessed with a family all you really want to hear from your kids is that everything is fine. For many people, once the choppy waters of getting an education, establishing a career and forming a family have been navigated, pleasure tends to come from managed modulation rather than unexpected peaks.

Much of the same can be said of the financial markets. When stocks are worth more than the value of a company’s current assets it signals anticipated future income for the owners, with estimates of the magnitude and certainty of that income being reflected in the price. When bond prices move it signals a view both on future interest rates and also the likelihood of the borrower paying back the money that is owed. Even in the most stable of times the fluttering of a butterfly’s wings can trigger a financial whirlwind. When Apple recently reported a drop in earnings of a couple of billion dollars it wiped over $50bn off the valuation of the firm, because suddenly the future wasn’t as rosy as it had been the day before.

On Friday financial markets around the world received a huge injection of uncertainty. They were forced to rapidly price in a surprise Brexit vote that only the day before had seemed unlikely. Stock markets around the world plunged, the pound collapsed, and the price of 'safe haven’ assets like the Swiss franc and gold surged as the reality of the vote sunk in. Even worse, the fog of political warfare generated by the campaign didn’t dissipate on Friday, instead it thickened and rolled out across the dales and valleys of European and global politics. Would Scotland now decouple from the UK in order to sustain its EU membership? Would Brexit embolden the already surging right-wing parties in the Netherlands, France and elsewhere in Europe to follow suit and unravel the fraying fabric of ever closer union? Would Britain now face simultaneous leadership elections in its two main parties as Cameron falls on his sword and Corbyn is bayoneted by his own troops in the foxhole he crawled into during the referendum? If the unthinkable could happen in Europe, what odds now of President Trump amplifying the uncertainty with his 'unpredictable is good’ brand of populism?

But as the political pundits run around like headless chickens, it’s worth recognising that the economic impact of Brexit will play out along two distinct paths. The first is the short-term reaction of asset and currency prices over the next weeks and months as the markets price in an emerging consensus view of the magnitude of the change to future economic prospects. Entrails will be read, statements from all sides will be parsed, and the markets will adjust to a new normal – even if the details of that future may not solidify for a number of years. British equities are likely to fall more than other markets and British borrowing costs are likely to increase. In general, UK markets across all assets classes are likely to experience high levels of volatility as they react (and probably over- react) to each phase of the political tumult that has been set in motion.

The second longer-term impact won’t be on paper wealth but on output, employment, productivity and the UK balance of trade. Not generally given to hyperbole, the Economist Intelligence Unit estimates that UK GDP will be 6% lower in 2020 than it would have been if the UK had stayed in the EU. London will be undermined as the financial capital of Europe and companies that rely on pan-European supply chains will face tough choices about where to locate. The price of imports will rise as a result of the weaker pound which will in turn put upward pressure on inflation. While theoretically exports should benefit from the devaluation of the pound, that positive effect may be more than offset by uncertainty around trade deals that need to be renegotiated.

Consumer confidence will undoubtedly take a hit, personal expenditure will drop and savings rates are likely to rise. The London property market is also likely to see at least the froth blown off the top of its red-hot cappuccino, although it’s unclear whether the expat Russians and Arabs will see Brexit as a net negative over the medium-term if some of the Leave contingent get their wish and turn the UK into a tax haven.

After the UK is out of the EU the longer-term economic reality will start to settle in and that is where we need to look for a silver lining within this pretty dark cloud. While the financial markets generally abhor uncertainty, there is one set of traders who thrive on it. Derivatives are financial instruments whose value is linked to an underlying asset and whose returns amplify those of the assets on which they are based. If the underlying asset goes up 10% the derivative can be worth 100% more. If the underlying asset goes down 10% the derivative can be worthless. One of the most popular derivatives are options. The right to buy or sell at a particular price on a particular date.

If you want to look for a positive it is that the UK has now created a multitude of economic options that weren’t there last week. As the politicians seek to negotiate the exit and chart a course for the post-EU UK economy, they need to recognise that the surprise outcome may offer an opportunity for a fundamental reset. With unexpected degrees of freedom maybe the politicians may take the opportunity to create an economy less dependent on financial services and paper wealth. Maybe they will see an opportunity to invest in education and R&D so that – despite trade deals that need to be renegotiated – the UK will have things to sell that the rest of the world wants to pay a premium for.

At the moment most of the economic options are 'out of the money’, as the focus is squarely on the downside, but if sovereignty regained is to be more than a slogan the changes need to go way beyond simply getting out from under EU bureaucracy and instead focus on creating a modern and vibrant UK economy that can survive the politically choppy waters ahead.

Am I optimistic that a Boris Johnson or a Michael Gove can lead the UK to that type of economic Promised Land? No I am not. Instead my money continues to be on short-term market volatility and medium-term economic pain for the UK. But just maybe we can recover the youthful sense of anticipation when standing in the line at an unridden rollercoaster and somehow find a way to make lemonade from what at the moment looks like a large putrefying pile of economic citrus fruit.