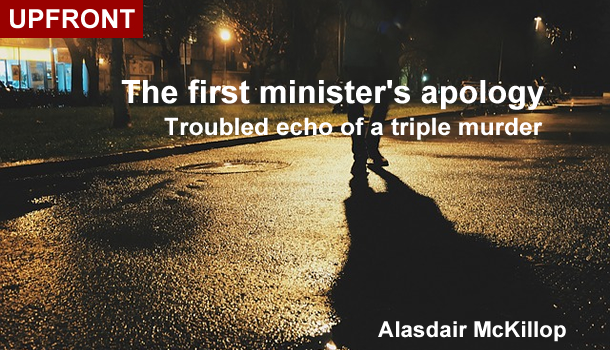 On 10 March 1971, the IRA killed three off-duty British soldiers from the 1st Battalion, Royal Highland Fusiliers. Lured from a city centre pub by the promise of a party and the possibility of meeting some girls, they were shot – two of them in the back of the head. The oldest, Dougald McCaughey, was 23. John McCaig was 17 and his brother Joseph was 18. All three were from Scotland.

Quite properly, the murders caused widespread revulsion and the implications went zinging along old and deep-lying Ulster-Scots lines with a bad urgency. Indeed, the circumstances might have been used by Alan Spence in his novel 'The Magic Flute' which grew up from the gaps in those same lines.

Sadly, the soldiers have not been undisturbed in death. A memorial was opened at White Brae on the Ligoniel Road in 2009 and five years later it had been vandalised 14 times. No one ever stood trial for the murders but a campaign has been launched to pursue a private prosecution of the IRA members suspected of involvement.

John Mason, the SNP MSP who represents Shettleston, was challenged on social media to support the campaign. Members of the McCaughey family reportedly stay in Mason’s constituency but it’s not clear if he knew this at the time. The exchange, which took place on Sunday 29 and Monday 30 January, was as follows:

It turned out the answer was pretty far.

John Mason: 'You say Irish murderers. Others say Irish freedom fighters. I support Scottish soldiers if they do good but not if they do bad'.

Good and bad. When it comes to judgement, how do you weigh Scottish soldiers tricked to their deaths at the side of some road by a gang of killers and cowards? In Mason’s estimation, how much did good and bad really have to do with it compared with, say, the uniform the men would have been wearing if they were on duty? A cousin of Dougald McCaughey said the remarks made him 'sick to the stomach'. Mason later said they were 'general and not about any specific case', despite being made while discussing a very specific case indeed.

An apology from Mason was issued by the SNP on Tuesday 7 February, more than a week after he made the remarks on social media. It stated: 'I deeply regret the offence and upset that has been caused to the relatives who lost loved ones and am extremely sorry that this has happened. I condemn and deplore all acts of terrorism. I do not intend to make any further comment'.

Feel free to pick a key word at random from that statement – 'deeply', 'extremely', 'condemn', 'deplore' – and determine its relationship to the truth of the matter. Tom Peterkin at the Scotsman reckoned the apology was an improvement on previous 'mealy-mouthed utterances' and it was welcomed by the director of the group campaigning to get justice for the three soldiers. One family member, however, suggested Mason was probably made to apologise by his party leaders.

It subsequently emerged this was close to the truth. Mason was contacted by the SNP’s chief whip, Bill Kidd, on Friday 3 February. Kidd informed him: 'I’ve been told that the issue of the newspapers continuing interest in your recent tweets is now causing concern for fellow MSPs in the group, who have constituents contacting them directly asking their comments on the subjects of concern and that’s unacceptable to happen'. From this rare and clunking dispatch from inside the SNP’s disciplinary apparatus, it must be concluded that Mason’s colleagues became concerned about the matter only when their constituents complained about it rather than being unduly disturbed by what he actually said.

The email from Kidd continued: 'The government are also now being approached and this could cause the first minister embarrassment, which I know you wouldn’t want. Therefore, I’ve rightly been asked to say that there should be no more media or tweet comments on the subjects at interest and I’d ask you to go down that line; and this without further explanation from yourself to any further enquiries for comment which might be made of you'.

Good and bad. Here was a useful insight into the relative importance the SNP leadership attached to crass remarks about murdered Scottish soldiers and the potential for the first minister to be embarrassed – only one was worthy of an intervention.

Mason was also asked to meet Kidd at 3pm the following Tuesday. His apology followed less than three hours after the meeting. When the SNP was asked about the email, it said Mason had changed his views after reflecting on his remarks and that they did not represent the party to begin with. This is the line used whenever an SNP lieutenant goes rogue in the hot jungle of social media or the machine jams up so badly that people start to notice. It’s a sort of dead-eyed, heavy-lidded, legalistic response that dares you to find an angle for a follow-up.

At least now we know something about what a process of reflection constitutes for the SNP and how it might come about. Reasonably enough, the campaign director said it was 'clear to see that there were political motives and forcing of hands behind the apology', which suddenly wasn’t really an apology at all but a gesture learned from a public relations textbook.

Unsurprisingly, matters still weren’t settled so Nicola Sturgeon finally intervened last Thursday. She personally apologised to the families of the soldiers and acknowledged the suffering they had experienced. She went on: 'I am therefore aware that recent comments made by John Mason MSP will have caused you and your family understandable offence and upset. While Mr Mason has stated that his comments were in no way intended to be a reference to the murder of your loved ones, I have made clear to him that the constraints of social media are no excuse for comments that offend or cause hurt and upset. Mr Mason has made clear that he regrets the offence and upset that has been caused by his comments, and that he is extremely sorry that this has happened'.

Only, it wasn’t clear at all that he regretted the offence and upset so much as the SNP was getting nervous about the bad smell moving into the vicinity of Nicola Sturgeon. Moreover, why did it take the first minister more than a week to conclude the matter was so serious that it required her intervention when the facts were available from the beginning? Would she have apologised at all if Mason’s own apology hadn’t been botched by the release of the email from Kidd?

The Belfast papers, particularly the News Letter, were to the fore in covering the story and pursuing an intervention from the first minister. The SNP issued the apology from Mason to the News Letter in recognition of its leading role. Scottish papers covered the story with varying degrees of interest. Special mentions should be given to the Scotsman, which splashed the first minister’s apology last Friday, and to Kenny Farquharson who used his column in the Times to call early and firmly for the SNP to act. It might only be a coincidence, but his forthright column was published on the day Bill Kidd contacted Mason. The Scottish Daily Mail also acquitted itself well. In an interview with the paper, Mason noted there were similar disputes about figures such as Nelson Mandela and Bonnie Prince Charlie.

Curiously, the Herald seemed to find little of interest in the story until late in the day. Neither Mason’s nor the first minister’s apologies were reported in print the day after they were issued. The website eventually carried an article last Friday afternoon but why was there such a delay when the story had ingredients that would normally cause the paper to lick its chops?

Just as confessions extracted through torture are meaningless, so are apologies given grudgingly. If the wait is too long or it appears external pressure has been involved, questions of sincerity will arise. In this case, John Mason and the SNP were guilty of a long delay before doing the right thing and for giving the impression they were only doing so because they had been forced into it.

The DUP’s Nelson McCausland took a keen interest in developments from a far earlier stage than Nicola Sturgeon appears to have done. Following her apology, he called for the first minister to lend her support to those campaigning for a private prosecution, while family members hope to discuss ways this might happen. Should the Scottish government decide to get involved, it might add impetus but the action will be tainted by the impression of yet more political expediency. It will be viewed as another public relations manoeuvre, a damage-limitation exercise with one eye on the press and the other on constituency surgeries. The local government elections will be hovering somewhere in the middle distance.

In this case, the good and the bad have been there all along but somehow the SNP has been unable to identify the plain right thing to do for three defenceless young men murdered on a dark road as they looked forward to a party. 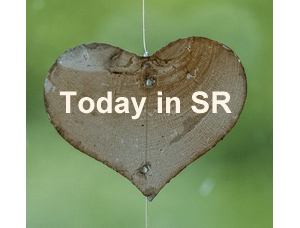 Dustbin of History
Part 2 of the Carole Compton trial