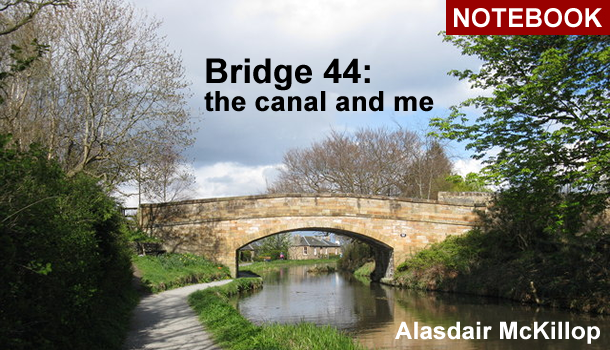 I
My section of the Union Canal has been refilled. It had been drained away almost to nothing so its embankments could be exposed and studied by maintenance engineers for a few weeks in late January and early February. If anything, it now looks to have been overfilled, like a mug of tea to which the addition of milk has been misjudged.

I call it my section only because I so often experience it alone. On my way to the railway station every weekday morning, I cross from one side to the other using bridge 44. I know of no more romantic title for the structure therefore it exists as though someone meant to give it a name but never got around to doing so. From the bridge to the point at which I leave the tow-path is a distance of no more than a meandering 200 metres. The short distance I travel and the time of day largely account for the solitude, not that I’m complaining.

With the canal to my right, it doesn’t take long for Linlithgow Palace to come cleanly into view on the left while the loch sneaks between and above the buildings on the High Street. A little further out there are fields and some buildings on the hills. Between the loch and the hills there is a motorway but it can’t be seen, allowing me to pretend that the concrete and even time itself have been swallowed up by the folds of the land. These are the main features of the view travelling in one direction. Heading the other way, usually in the early evening, it is possible to see as far as the petrochemical facility at Grangemouth. Sometimes huge columns of steam are clearly visible like the muscled arms of some Earth-bound God trying to grab the sky and pull into a terrible collision with the land. If the conditions are right and one of the pillars is emitting a high flame, the scene can take on an infernal quality.

II
Every now and then, I wonder what would have happened if the canal had been frozen on the day it was meant to be drained. It was January, after all. Reluctantly, it seemed only fair to conclude that if a team of people had the ability to drain part of a waterway, they could probably have dealt with some ice if it had come to that. The canal hasn’t frozen much or severely this year anyway. As was the case for a time when I was younger, the extent of freezing on the canal is my chief, albeit informal, indicator of a winter’s severity and the evidence suggests this has been a mild one. There have been days when the top of the water assumed a greasy sheen which I took to mean it was thinking about freezing. Rarely, however, has it managed to form a solid sheet.

Not that long ago, according to memory, it was common for the canal’s face to become so hard and thick that it was possible for people – never me – to walk on it. Some of my friends would cross the ice to get to the golf course where the 17th slopped down from tee to hole. Naturally, this made it one of the prime sledging spots in town. If you were in control of your sledge, you could take it down almost to the ice so that you were among whatever was left growing at the edge. But where was the danger, really, when you knew fine well people had been sauntering on it before you finished your run?

III
While most of the water was made to disappear, some remained behind to serve as a reminder to put back what was taken. There was always a little sitting in the bottom of the trench like a zip that might be pulled down to allow the missing contents to bubble up to the surface. One evening, I spotted three mallards standing in the dribble. There were two males and a female, and I imagined them to be the same trio who had taken up residence in my section last year. Whether this was likely or not I don’t know, but it was fun to believe it was so. I imagined them exchanging puzzled looks as if to say, 'it wasn’t like this when we left, was it?' If it was the same ménage à trois of mallards, I knew they had survived worse. One night last summer, travelling over 44 by car, I saw a cat pounce at them. I only saw a split second of frenzied activity before the road dipped away from the scene. For several days afterwards, I saw only the two drakes and assumed the worst. Their heads, on which the colours move as they do in splashed petrol, were properly bowed in shame at their failure of feathery chivalry, or so I thought. But then, the female duck reappeared as if by magic, a bit like the water.

IV
I could know a lot more about some of the things I’ve described. It would be easy enough to know if it’s common for mallard ducks to live in sets of three or to return to the same place every year. Similarly, it would be easy to learn more about the engineering feat that removed the water and then returned it weeks later. In all likelihood, the reality would be far more impressive than anything I could imagine. Finding out more would be easy when information is everywhere, jostling us and getting under our fingernails. Maybe that’s why I gently resist it in this case: information can stifle the imagination as surely as it can cure ignorance and sometimes it’s good to let your mind go with the breeze. Soon, the disappearance of the water will be forgotten anyway as the benevolent seasons draw life out of the trees bordering the canal. A protective green canopy will come down while new life is summoned up at along the edges. For a while, the growth will be so vigorous that my children will need to be lifted off the ground when the ducks are spotted making their way through the water.

The Daily Sketch
Scotland the inert