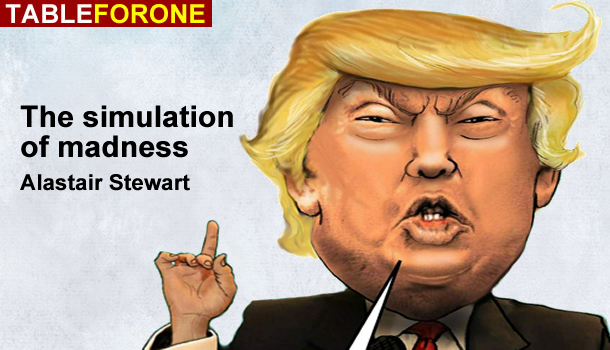 Former Breitbart editor Milo Yiannopoulos was not best pleased by the US attack on Syria, tweeting: 'There comes a day in every child's life when his daddy bitterly disappoints him.' Why is he surprised? Even to his most ardent critics, Trump could never have been as uninformed, as boorish and as wholly without tactics as he appeared. And this is his appeal. The absence of an agenda attracted those tired of the establishment and terrified those in it.

The historically obvious international strategy of Donald Trump begins and ends with a man who was as much of a political outsider, and just as coarse: Richard Nixon. Nixon and Henry Kissinger were famous subscribers to 'madman theory'. Nixon's team was determined to make communist leaders think he was dangerous and volatile as a means to secure better terms of co-operation.

Nixon's chief of staff, H R Haldeman, wrote that Nixon had confided in him: 'I call it the madman theory, Bob. I want the North Vietnamese to believe we can't restrain him when he's angry—and he has his hand on the nuclear button.'

In October 1969, the Nixon administration indicated to the Soviet Union that 'the madman was loose' when the US military was ordered to full global war readiness alert. American diplomats, especially Kissinger, likewise portrayed the 1970 American incursion into Cambodia as a symptom of Nixon's alleged instability.

The ingenuity of Trump and his advisors is that they have fanned distraction. So little is known of Trump the man that in a world of perennial observation, he is as much a mystery to his own electorate as he is to his America's foes. Consider the parallels to Nixon: Trump's reputation as a bogeyman far supersedes him as a credible president. There are no books, no charmed attempts at insightful bonhomie; there's only an undercoating of machismo and a vacuum where easy charm normally resides.

The result is genuine fear rooted in a powerful unknown president. And it is fear which is the most useful tool in the arsenal of any leader who wishes to make a lasting change. Machiavelli argued that sometimes it is 'a very wise thing to simulate madness.' In this, Trump is unrivalled at stoking bewilderment and panic with no resource available to extrapolate his next move. International relations remains a diplomatic wild west of law and power, even if travel, trade and the internet have disguised the fact that strength is still everything.

There are points of departure. Nixon, forever scoffed and laughed at, was nevertheless an experienced campaigner, Washington insider and former vice president. Where Trump and Nixon are evidently paranoid and socially awkward, there is nothing to say they are equally as skullduggerous (merely that they were both caught saying things they'd rather you forget).

Trump is a historically determinist entity; a reactionary construct against globalisation and mass immigration that was always going to be. This is his reality and not the buffoonery which guises a succinct strategy toward the world.