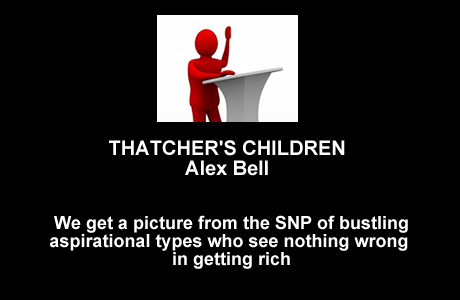 Pay is the political issue of the moment. Citizens in wealthy western countries are angry that some people are very rich, while most of us are not. While there appears to be little evidence of a revolution fermenting, that doesn’t mean it isn’t a very serious issue – democracy depends on the idea of fairness and a fair share. Pay is the heart of the social contract.

People in developing countries would give their right arm for our levels of pay, but that doesn’t make this a 'first world problem’ in the perjorative sense of that term. It really does matter how we learn to balance wealth in rich societies. Nearly a million people are in poverty in Scotland, according to government statistics – that is a moral affront.

Wealth can be measured in different ways. The fact that my child can go to primary and secondary school for 'free’, get 'free’ healthcare and live a in broadly honest and law-abiding society is a great asset. We dismiss people who admire British stability at our peril – an honest, well-policed community is a precious thing. Pay matters because within this society there are a few who appear immune to the vagaries of boom and bust, of zero-hour contracts and minimum wages. While we don’t want to burn these rich folk at the stake, well, not quite yet, we do think that such absurd levels of pay are unjustified when so many of us are a brown envelope away from disaster.

The problem has always been with us. Famously, a theatre group was named on the fact that 7% of the population owned 84% of the UK’s wealth (7:84, from a report in the Economist reporting on wealth distribution). 7:84 now looks quaintly generous. Another report from Oxfam reminds us that 1% of the world’s population owns more than the rest of us put together. Government statistics in Scotland work on the 10:90 ratio. Pay is the obvious way to address this imbalance. Give people more cash to take home, and tax them less for it (as is happening) and you give them choices. We are trapped in a world of consumerism – few of us reach a buddhist level of carelessness about material goods – and extra pay allows us to exist without fear, and enjoy some level of satisfaction.

The wider political problem with pay is two-fold. The first is that our politicians are in or very near the 1%. Alex Salmond and those who served in the SNP cabinet since 2007 have been paid a million each over eight years. There is no blame attached – the money is a transparent reward for public service. On top of pension savings, previous earnings and a lifetime of being in work, these must be rich people.

The smattering of SNP scandals has revealed it to be just like other British parties – composed of self-starting entrepreneurial types, Thatcher’s children to a person. With questions raised over property portfolios, undeclared business interests and share investments in trusts associated with 'Big Tobacco’, we get a picture of bustling aspirational types who see no wrong in getting rich.

The statistics on pay scales in Scotland show 18,000 people pay tax on salaries above £150,000, which is roughly 0.7% of the working population (there are 2.5 million workers). We can guess then that the 1% in pay probably kicks in around the £120k mark. While the government also provides some information on wealth, I cannot find a number which defines how many assets the top 1% hold. Wealth is a more useful indicator than pay – you may earn £20k but live in a Edinburgh town house and have a trust fund offshore.

We can then surmise that MPs and MSPs who have had 30 years of building up wealth and are now being paid £75k a year minimum are in the upper echelons of richness. This doesn’t make them insentive to the poor, and arguably regular surgeries with constituents makes them more aware than the rest of us of life’s inequities. It does though make them different.

The second political problem is how easy it is to address this matter. The Scottish Government pays the living wage to direct employees and the UK Government is talking of raising the minimum wage. Nicola Sturgeon has recently said positive words about correcting the gender pay gap (a different but related point) and Jeremy Corbyn has aired views on making rich companies pay higher wages. The issue then is not awareness, but inertia.

Eight years ago the SNP could have made pay equality and higher minimum pay an integral part of its annual haggling with local authorities. It didn’t, and arguably deliberately avoided such talk to impose the council tax freeze (which disproptionately benefits higher earners). First minister Sturgeon could correct all this in the upcoming manifesto, but she won’t. To be brutally clear, she’d rather keep higher earners onside than correct the worst excesses of the pay inbalance. There could be a fascinating political debate over council tax, and perhaps other taxes, in order to raise the pay of nurses, social workers and other public servants. It is however a debate the SNP do not want.

Similarly it is far from radical to suggest rich companies pay higher wages. Corbyn’s proposal, as I understand it, would prevent dividends being paid to shareholders before pay had been set in a ratio for all employees, from the CEO to the cleaner. That may offend the libertarians, but is no more than a correction of the pay mania which began in the UK in the 1980s. Not so long ago, a CEO would expect a more proportionate pay packet, and would have laughed at the idea of rewards for failure (when bonuses are paid out even as a company dips into loss). Far from being an impediment on the econony, putting more money into the hands of most workers is a good thing – it increases spending and confidence. It keeps money in circulation – increasingly rewards to the super rich get squirreled away in non-productive offshore trusts.

Pay is maybe the issue, but the question is how far are our leaders prepared to join hoi polloi on something closer to the average, and can the imbalance of wealth be corrected before another crash, when we might all feel a wee bit more revolutionary – there’s nothing like the immolation of an arrogant rich man to make the mob feel better.

Walking down the North Bridge towards the statue of the Duke of Wellington in Edinburgh, I often see the Socialist Party campaigning for a £10 minimum wage. Two thoughts occur – the first is admiration for people who still think they can change the world with a loud-hailer and a trestle table, the second is how moderate their request is. Trimming the excesses of pay inequlity is not only possible, but good for all of us (we become less bitter at the rich) and protects the many other forms of wealth – peace, law and civilised society – we all enjoy.

Alex Bell will be writing a monthly column for SR

Editorial
Kenneth Roy
We are all doomed: the experts who spread
the politics of panic

Main articles
Walter Humes
DIARY
Secrecy of the dons: what do our universities have to hide?