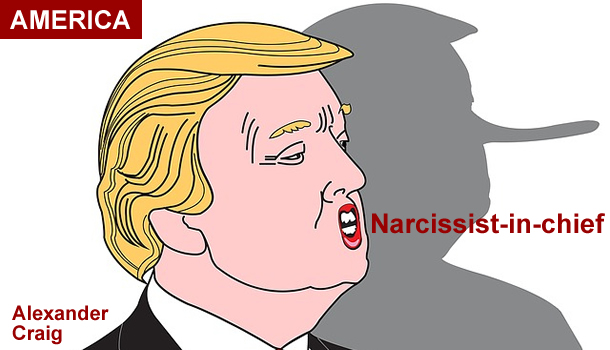 Donald Trump told me a fib. He said his mum, Mary Anne MacLeod, was from Stornoway. She was actually from Tong, a fishing village some distance away. If BBC Worldwide is to be believed, when he visited the typical slate-roofed Scottish cottage that was her childhood home, he spent all of 90 seconds inside.

He himself attributes his flamboyance and penchant for entertainment to his Scottish side. 'I feel very comfortable here. I think I do feel Scottish.' He kept this quiet in the US during his campaigns, but says Scotland is where he gets his tenacity from. The MacLeod clan motto is 'hold fast', the crest a black bull's head between two red flags.

Donald Trump and I had been chatting back in 2003 as we entered the crowded main hall of the majestic Metropolitan Club on Fifth Avenue. The event was media company Hollinger’s AGM. Chairman Conrad Black (who told CTV News in August last year that Trump’s rise was 'magnificent, an amazing achievement'), shouted out: 'there’s Donald Trump, surrounded by beautiful people – as usual.' I thanked Black for his few kind words when the meeting was over, but I think he might well have been referring more to Melania and Ivanka than me.

I’ve followed Trump’s peregrinations since then. People keep comparing him to Hitler or Mussolini or other authoritarian, not to say dictatorial types. More apt comparisons, for the moment, are with Latin American caudillos.

I first went to the Americas as a Guardian and Glasgow Herald correspondent in Buenos Aires. On one occasion returning there from the UK, I stopped in Madrid: the palatial home in Puerta del Hierro of exiled dictator Juan Domingo Peron. Evita’s body was quite possibly right next door to us during our three and a half hour taped conversation.

On Peron’s return to Buenos Aires in 1983, after 18 years in exile, murderous riots took place at Ezeiza Airport between left-wing and right-wing Peronistas. It’s estimated that over 100 people were killed. The 'dirty war', with its thousands of desaparecidos, broke out three years later.

'I decided to follow Mussolini but not make his mistakes,' Peron told me. My main interest was in his style of rule. I wanted to find out, above all, about his populism, and asked him to explain himself. 'If I define, I exclude,' said the man millions in Argentina still revere or hate.

Peron was as elusive and vague as Trump can be.
'Is it true you took $800 million dollars out of the Argentine treasury?'
'Señor Craig, if you can find it, it is yours.'
'That,' I responded, 'is the whole point about Swiss banks.'

Shortly before he was kicked out, Peron addressed hundreds of thousands on the widest avenue in the world, Nueve de Julio, just up from the Plaza de Mayo and the Casa Rosada, Argentina’s White House: 'For every one of us that falls, five of them will fall.'

He was very elusive on this too when I asked him in Madrid. That’s populism all over – super vague. Evidence-based assertions? Forget about them.

The incredible over-confidence mixed with bluster and braggadocio is something only top-of-the-line populist leaders can amass, use and display, such as Donald Trump, the narcissist-in-chief. Last summer I visited Trump’s golf course at Balmedie in Aberdeenshire. 'The greatest golf course in the world'. Trump, with his characteristic modesty, puts double quotes round that assertion.

After their dispute over wind farms, Alex Salmond and Donald Trump turned on each other. 'Trump is a man-child who poses a real and present danger to US security,' Salmond said. He challenged Trump to a debate, but Trump, realist for once, declined. As good a debater as he is golfer.

Another populist who got ruthless power, at first through elections, figures here too. Donald Trump's ex-wife (one of them) once said Trump kept a book of Hitler's speeches by his bed. Neglected aspects of populism include spitefulness, delusion and impulsiveness. No need for teleprompters, preparing speeches, and so on – nor policies. Fellow outsiders identify not just with hope but also with fear and resentment.

Last September I talked with one of Trump’s strongest and wealthiest supporters, Steve Forbes, at a book launch in Montreal’s Palais de Congres. His latest book has the uncompromising title of 'MONEY: How the Destruction of the Dollar Threatens the Global Economy'.

We chatted for a bit about Aberdeenshire. My mother came from there, as did his grandfather. The latter emigrated to the US and started Forbes magazine. With a personal fortune of $340m, Steve Forbes supports Trump because of his promise to cut taxes. Forbes himself was twice a candidate, in 1996 and 2000, for the nomination of the Republican Party for President.

Forbes magazine currently pegs Donald Trump's net worth at $4.5 bn. He himself claims, or boasts, $10 bn. The billionaire 'outsider' doesn't rank in the top 25% as listed by Forbes — and he didn't last year, either.

Back in Canada, and plenty of other countries, if you’re a public speaker, motivational or otherwise, what do you do to arouse your audience? Two words: Donald Trump. Amid the ensuing wry, angry laughter aroused, we should realise that moral superiority can only take us so far. This man is dangerous.

What will the ever-erratic Donald Trump do now? A legend in his own mind, he is unlikely to follow the counter-slogan to Make America Great Again – Let’s Make America Read Again. Trump’s base is not small. He seduced large parts of the American public, if not the women he assaulted.

Economist Joseph Stiglitz in October last year told Britain’s leading magazine of ideas, Prospect, that he’s now not so sure about globalisation. For the large number of 'squeezed Americans', Trump 'told a story that they bought. And that had more credibility than the stories the establishment figures kept telling, that everybody is going to be better off.'

I’ve worked in banana republics, and at times, the US seems determined to out-do them. Grotesque is too mild a word for the obscene, fact-free campaign. Politicians – and Trump now admits he is one – are even more egotistical than the rest of us. When it comes to narcissism Trump is streets ahead: 'I think the only difference between me and the other candidates is that I’m more honest and my women are more beautiful.'

Trump has more than 20 million Twitter followers and has said all sorts of frightening things. Perhaps the most fearful was on June 16 2015: 'I am officially running for president of the United States.'

Alexander Craig is an independent journalist based in Quebec