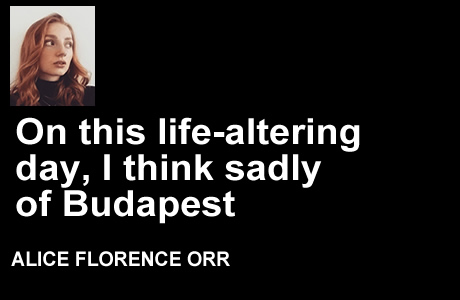 The river's waters were calm. A large and winding body that serves to unite two halves of a divided city through its many ornate bridges, it carves a line through the landscape, anchoring a whole community typically defined by its districts. An exquisite orange light illuminated the black lacquer of its surface, and one might have mistaken it for dawn rising in the warm late evening. Couples interlocked fingers as they strolled down the promenade where we stood, stilled in our awe. Ten minutes, 20? We stared at the dancing lights, only drawn back into the wide streets by the hushed chorus of the city.

Budapest is the second most illuminated city in Europe. You might be fooled into thinking you were in Paris when looking out at the enchanting display. In my naivety, as I hurriedly packed my backpack and departed for Hungary, I expected to find myself in a world utterly different from my own. I had never visited Eastern Europe before, and despite myself many of the stereotypes peddled by the Leave campaign had instilled something akin to apprehension in me.

What I found there instead was a place exuding culture and excitement – similar, yet delightfully different. The threads of distinctive districts had woven together a city rich in diversity. The food, architecture, infrastructure and arts all ached with sophistication and elegance. Never before had I found a place I felt could, maybe one day, replace Edinburgh as my home. Even within the United Kingdom itself, I'd struggled to emotionally connect with its offerings. However, I'd be lying if I said the weather didn't play a major role.

As the sad news of the EU referendum result reached my ears this morning, I couldn't help recalling my visit to Budapest. During our time there we visited the Dohány Street Synagogue, a magnificent structure situated in the centre of the Jewish Quarter. It's design was like nothing I'd seen before. Throughout my trip I'd euphorically snapped photographs, enthralled by the new colours and sights to be found in every square or street corner. Yet although I paid for a photography permit upon entry to the synagogue, I still felt strange taking pictures of such a historically important and emotive place. Not for a moment did I believe they did justice to how beautiful the interior nor how moving the memorial garden were. Dohány Street was used as a Jewish ghetto during the second world war and thousands of unknown Jewish people are still buried beneath the grass. Studying history doesn't come close to preparing you emotionally for the moment you are faced with it in person. Hundreds of names are remembered on the walls of the courtyard. Thousands more remain anonymous.

For many people, the European Union symbolised the end of the kind of segregation that leads to hatred and pointless death. Not for one moment do I wish to politicise such an abomination from our recent history. I only wish to say that the reality of not being able to work, travel or live in Budapest, or any other European country, with the same ease and freedom we have enjoyed deeply saddens me. Accepting other people, both here and in new places, is essential for our tiny, ever-growing world. I hope that the compassion we have supposedly learned since 1945 survives this life altering day.