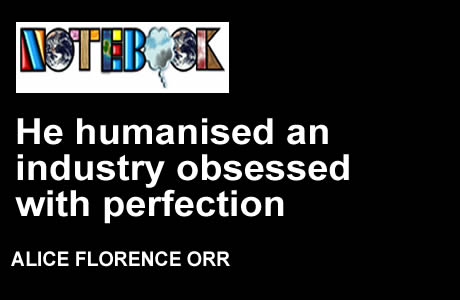 On 22 November 1963, Jackie Kennedy wore a suit to her husband’s funeral. Three-quarter length in the sleeves, and a skirt cut just below the knee, the Balenciaga two-piece is notable as her second most famous ensemble. Purchased at Chez Ninon in New York, the outfit was originally a rich scarlet hue, a departure from the trends of the time. Just prior to the funeral, Kennedy sent her suit to Bill Cunningham, who dyed it black and returned it to her to be paired with a matching veil. Originally a hat designer, he would have approved immensely.

To say Cunningham was more than just a fashion photographer undermines the very industry he devoted his life to. Nonetheless, the statement is true. Not knowing his name is not a barrier to being unconsciously familiar with his work, or influenced by his style. In his youth he attended church with his family; he found fashion in the pews, not religion. It began a passion that led him into the streets of New York, camera in one hand and an unfinished Harvard degree in the other. His particular skill resided in taking pictures of beautifully dressed people walking around the city, and in doing so he created a unique sense of intimacy and vulnerability in such a public space.

The moment that defined his career in fashion photography came in 1967. In the Sheep Meadow of Central Park, Cunningham used his first camera to photograph a woman clad in a glamorous coat and dark glasses. She was utterly unaware of her presence in his picture, now iconic in both photography and fashion circles. The woman was Greta Garbo, and the photograph cemented both his artistic style and his job at the NY Times.

The reason fashion ignites such excitement in certain spheres around the world is its ability to express something internal about a person in an exterior form. Cunningham both encapsulated this and turned it on its head. So often we see clothing presented on heavily manipulated models, composed to express the beauty of the garment, or to capture a lifestyle concept. Instead, he photographed the people inside the clothes, expressing its artistry through the individual wearing them. He celebrated an arguably superficial medium by making it mundane; he humanised an industry obsessed with creating perfection. One can admire a pair of shoes for their design, or their manufacture. However, it isn’t until you place them on the feet of a New Yorker that you understand why they were created. Clothing can be beautiful. Someone wearing them is a work of art.

It would be false to claim that it was only Cunningham’s skill that made him influential. There are many talented photographers currently working in all aspects of the industry. The unique quality in his pictures came from his ability to capture people at unguarded moments. To see others as they are, rather than the image they project to the world, is an important lesson for our age. Whether within a social media screen, on a political stage, or observing the person you are sitting next to on a train, as a society we appear to lack the ability to break down a façade. It is highly unlikely that, as people, we will ever cease to create our own image. We strive to only reveal what we feel comfortable with, or what casts us in the best light.

To balance this, we must learn from Cunningham’s approach and not base our view of humanity solely on what is presented to us. To pause for a moment, perhaps just long enough for someone to let their guard down. We might start to be endeared to other’s flaws, or see merit in people we have previously discarded.

It is much easier to empathise with people we see as similar to ourselves. Through his photograph of Greta Garbo on that ordinary day in Central Park, he showed the world that even film icons are real people, just like us. I have a feeling this goes for most people across our planet too.

Bill Cunningham died on Saturday. He left a world markedly different from the one he entered 87 years ago. One thing that remains, however, is that we still wear black to funerals.