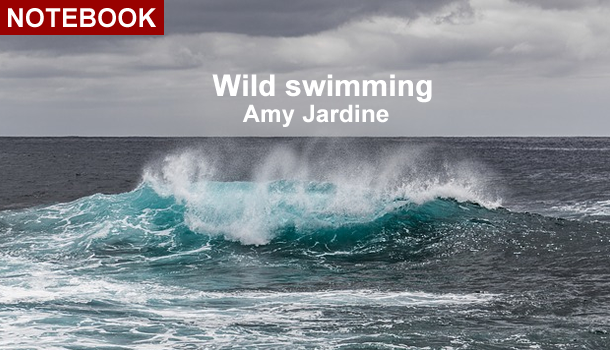 The right book will find you at the right time. I like to think that life, with all its intricate coincidences, only appears to have patterns; it's all random. Yet here is the pattern repeating itself – another book has come along. When I was given Amy Liptrot's excellent 'The Outrun' for Christmas, it was the right time.

'The Outrun' is about Liptrot's recovery from alcohol addiction and her creation of a new sober life. After rehab, she leaves London to return to her childhood home of Orkney. Back on the island, space opens up ('there is so much sky') and there is life all around, from the worlds of sea creatures and migratory birds, to the human world of island myths, neighbours' stories, miraculous aeroplanes, meteorology. Liptrot's detail is meticulous, lively, enthralling. Each new discovery strengthens her. She writes toward the end of 'stunning reality', the radiance of normal life: 'I feel as if I’ve opened a door that has always been in my house but I had never noticed'.

When I gave up alcohol in the summer of 2015, I hardly considered my drinking a problem. It took months to untangle the reasons why I had given it up, and to finally admit wrongdoing, shoddy behaviour, uneasiness, wasted time. I'd never had any great dramas through drunkenness (I was always far too afraid of getting in trouble to be conspicuous). Nevertheless, if I wanted to live a life I was proud of, I had to stop.

Liptrot stresses that she didn't give up drinking so she could spend her days thinking about drinking: 'I gave up drinking to do other things'. After I stopped, I was surprised I'd ever got anything done at all when I was boozing. There was just so much else to do. I, too, found doors I had never noticed. Eighteen months in, the only thing I still missed was a certain spark of spontaneity, the glimmer of risk, irresponsible fun, which alcohol brought to life. Nights were placid but leant towards humdrum.

It was a problem of imagination. I shouldn't have been so quick to admit defeat. In December my boyfriend and I went to Skye. It was an escape from the city, a search for open spaces. We climbed to the Old Man of Storr, braved vertigo to get close to that eerie relic of an ancient landslide. We went to the fairy pools. I was dazzled by the glassy transparency of the water, the perfect view of underwater paths and grey-green caves. Staring into a pool, mesmerised by the swirl of its current, I felt a sudden forceful craving, though I couldn't say for what. After a short discussion on exactly how cold the water might be, I decided to own up to my desire. I needed to be in that pure cold water, to know what it felt like. Stripping off my jeans and jacket and shoes, I announced that I was going to jump in. And I did.

Liptrot discovers sea-swimming as an ideal tonic to her sober life. She joined a group called the Orkney Polar Bears who swim in the sea every Saturday morning, all year round. 'I want to shock myself awake – after central heating and screens, to feel cold, with skin submerged in wild waters, is attractively physical'. Here is the way alcohol melts your worries, simultaneously soothes and wakens you. 'The cold water is cathartic. It's refreshing, like the first drink; it offers transformation and escape'.

Swimming in the outdoors, in a cold wild pool between waterfalls, gave me that buzz, that familiar launching away from ordinary life, into a place of sheer exhilaration. Unlike the buzz of alcohol, though, what I felt in the fairy pools was the real thing. A cold shock, tongue-sucking. I yelled a bit about the temperature, splashed victoriously around, churning up the pool. The December sky must have been dull, the rest was rusty grassland, and my boyfriend was looking at me like I was mad, and then stoically commented 'this means I have to do it too' (the logic of the dare). For me, the sky was bright, the grass was golden. I was plugged in to the purely physical feeling of being alive.

When I jumped out, I felt warm, as it were a hot summer day. Relief mixed with comfort in my bones. The whole experience of wild swimming, if I could give it such a strange adjective, was luxurious.

I hadn't connected this to drinking at all – I only thought afterwards about the jump (when I was stuck in a stuffy office, Christmas shopping in strip-lit stores with hordes of others) as a high-point in life. That time we swam in the fairy pools in December. What a great laugh. How strange, then, to have found exactly the explanation I was looking for, right there in the pages of 'The Outrun'. Wild swimming is a transformation. Wild swimming is an escape.

Then again, perhaps it is not so strange at all. Life is full of surprises like that. The summer’s day in my body after a dip in an icy pool and the serendipitous arrival of a book to answer questions: here is the spark I rashly gave up on when I stopped drinking. It is a never-ending miracle to me that there is so much contained in even the most humdrum day that pleases and consoles us. Beyond our small daily solaces, there are always seas and rivers to swim in.