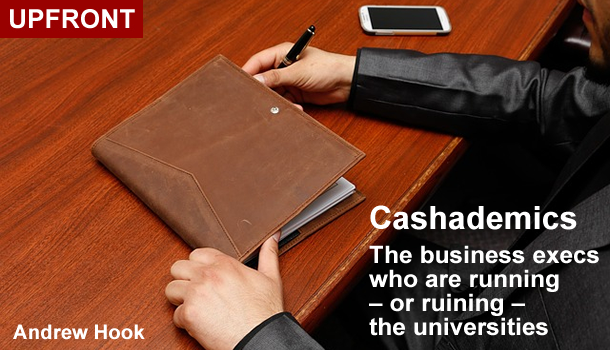 We have become obsessed with league tables. Claudio Raniero's dismissal after Leicester City's plunge down the premier league was front-page news for several days. I've just been reading about a very different kind of league table, but it too tells a disturbing story. What does it concern? The salaries of vice-chancellors and principals of UK universities. A recent report reveals that the remuneration the bosses of our universities now receive is spiralling out of control.

The report also analysed the annual amount vice-chancellors and principals claimed as expenses. The average claim for airline tickets was £7,762 per year while on average £2,982 was claimed for hotels. Needless to say, airline seats – like most hotels – were first-class. The good life indeed.

Responding to the report, a spokesman for the Russell Group of universities (the Russell group consists of the 25 UK universities ranked highest in terms of research and teaching), reassured us that how much individuals are paid is decided by 'official university remuneration committees'. (The sense in which such committees are 'official', and who in fact compose them, remains unclear.) And he went on: 'These experts understand the importance of attracting and retaining experienced individuals who are capable of managing complex international institutions'. In 2015-16 Russell Group bosses were no doubt successfully persuaded to stay on with salary rises of between 5 and 9%, meaning that their average pay reached £342,200 per year.

In fact the Russell Group's spokesman's words gives the game away. Universities are now to be seen as 'complex international institutions'. That they are involved in education – in teaching and research – is incidental. In terms of administration and organisation, they are no different from other large corporate structures. What is required of a successful big business is what is required of today's universities. A vice-chancellor or principal is just another CEO – and has to be remunerated accordingly. The result is all too clear in the figures set out above.

In the old days, our universities were run by academics who had chosen to move over to the administrative side. No doubt they were not always as efficient or streamlined as they might have been. But they did know what teaching students and pursuing research was all about. It would be interesting to know what percentage of today's constantly expanding number of administrators (including vice-chancellors and principals) have a similar hands-on academic background.

With its enthusiasm for still more universities competing with each other for 'customers', two-year degrees and the rest, the current government's commitment to the business model for today's universities is unequivocal. Just how wonderful the educational outcome will be long-term remains to be seen.