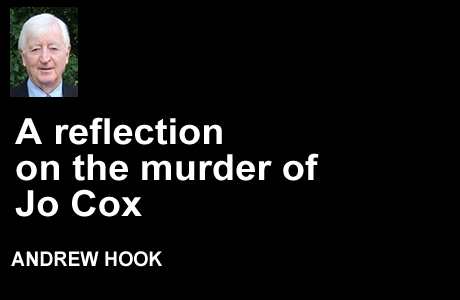 I have been listening to a BBC radio discussion concerning the state of our political and media world in the wake of Jo Cox’s shocking murder. One of the participants – the ex-editor and commentator Max Hastings – has remarked that what is happening at this time amounts to a challenge to the values of the age of Enlightenment. To my mind he is absolutely right.

Here in Scotland in 1697 Thomas Aikenhead, a 21-year-old student at Edinburgh University, was hanged for the crime of blasphemy. But Aikenhead was the last person to die for such a so-called crime – because in succeeding years our society was transformed by the triumph of the 18th-century Enlightenment.

What did Enlightenment mean? Well as good a definition as any is that it meant the defeat of extremism in all its forms – and nowhere more so than in religion and politics. Looking around the world of today, however, it seems to me that it is extremism that is on the march: ISIS, Boko Haram, Paris, Brussels, Orlando, and now the horrifying death of a brilliant young member of parliament. Perhaps we have been complacent in assuming that enlightened values would eventually prevail everywhere.

In any event, I believe there is no answer other than to stand firm in defence of these values – even if that involves academics and intellectuals reconsidering their commitment to cultural relativism and other fashionable ways of thinking which may undermine them. The troubling death of Thomas Aikenhead helped to make religious tolerance prevail over extremist dogmatism within the Church of Scotland itself. Is it too much to imagine that the death of Jo Cox, who believed so passionately in justice and tolerance, might encourage us all to redouble our efforts to sustain such values? Next edition of the Scottish Review: 29 June 2016
Subscribe Today