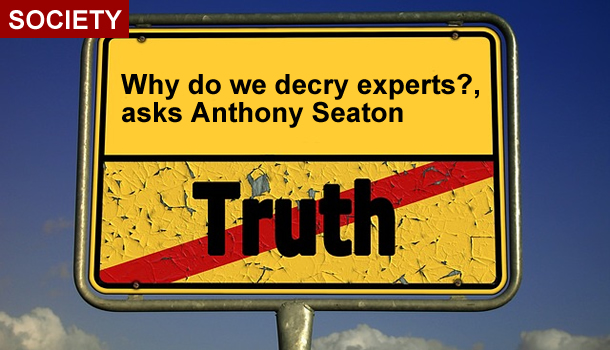 Donne, I suppose, was such another
Who found no substitute for sense,
To seize and clutch and penetrate;
Expert beyond experience...

T S Eliot, in 'Whispers of immortality', paid tribute to some of those who had influenced him, looking beyond the superficial, searching for meaning, looking for the deeper truth, becoming expert beyond experience. Recently we have seen the popular press and some politicians proposing that we should ignore experts, that such people are often wrong and may give advice that is seriously misleading. I wonder if those who promote such views would see themselves as having some expertise, perhaps in journalism or the dark arts of politics and public relations. Or are they just empty vessels? What do they mean by 'experts'?

The dictionary is not a lot of help, the word deriving from very similar French and Latin nouns meaning one who has particular knowledge or experience; only one definition is more specific – an Australian slang word for a leader of sheep shearers!

Apart from that, pretty well all of us could be regarded as expert in something. In my career I have come across people from all walks of life who had great expertise in one or more crafts or professions. I assume they were sent to me because their doctors believed that I had appropriate expertise. As time went by I accumulated special knowledge of more arcane matters such as air pollution and particle toxicology, ending up as someone who would have been regarded as knowing a lot about very few things.

Expertise is relative and selective, and requires much effort to maintain; the list of things I am ignorant of is endless. Anyone considered expert also knows this well and continues to learn from other greater experts; just as Newton stood on the shoulders of giants and Einstein stood on his, so Eliot stood on Webster’s and Donne’s. Higgs’ boson is but a stepping stone for other nuclear physicists. An expert is someone who has depth of understanding but who knows that understanding to be incomplete and may hope to advance it. For this reason, those who have expertise would usually hold back from actually calling themselves an expert.

Why then this disparagement of experts by some politicians and journalists? I believe it is based on both a firm foundation and on a misunderstanding of expertise. The firm foundation is that when experts extrapolate from hard science to making predictions of the future, as they are often called upon to, they like everyone else are often wrong. This is especially true in areas such as economics and weather forecasting where complex or chaotic systems can never be fully taken account of in their computer models.

Back in the 1960s when I migrated to the USA I was struck by the weather forecasts that, in contrast to the UK, announced a probability of rain in percentage terms. This made clear the uncertainty surrounding the prediction. Uncertainty is fundamental to science, as is scepticism; we must always question our results and seek evidence to support or contradict them. Of course, this sits ill with the way media transmit messages to the population, as both parties in this transaction crave certainty, and naïve headline writers and far-from-naïve political spinners do their best to convert scientific information into factual predictions.

Unfortunately, a recent culture change among scientists, driven by the perceived need to enhance their profile and persuade grant-giving bodies to give them research funds, has been to overstate their results in terms of possible benefits, giving gifts to the headline writers. This is dangerous. Thus announcement of some miracle cure of chronic disease in the Daily Mail, (usually) based on a small study in mice, raises false hopes in patients and leads to further disparagement of 'experts'.

Misunderstanding of expertise relates to the loose use of the term expert in the media as implying infallibility. No real expert would claim this, but to explain the concept of statistical uncertainty does not sit well with short TV or radio interviews or with the need of journalists to present in black and white terms. Even more difficulty must arise in trying to explain the basis of the mathematical economic models that may have driven one Nobel prize-winner to reach one conclusion and another to a completely different one – they have used different assumptions deep down in their calculations, so their conclusions should only be expressed in terms of likelihoods. Anyone interested in future climate change prediction will know that this is how they are expressed, in terms of risks rather than certainties.

Next time you hear someone decry experts, ask yourself what expertise that person has that allows him or her to make such a judgement. Are they so wise as not to need expert advice or are they simply disagreeing because the message is unwelcome? But also, ask yourself who called that person an expert; is he or she likely to be very knowledgeable and, if so, do you trust what they say? The expert who expresses some uncertainty is more likely to be trustworthy than the one who is certain. Ultimately, it is for history to decide who was a true expert since today’s understanding is not infrequently found to be incomplete or even wrong. Perhaps it would be better to confine the term to the dead.

Obsession: The story of a literary affair
KENNETH ROY

Why I don't want to pass away
CAFE