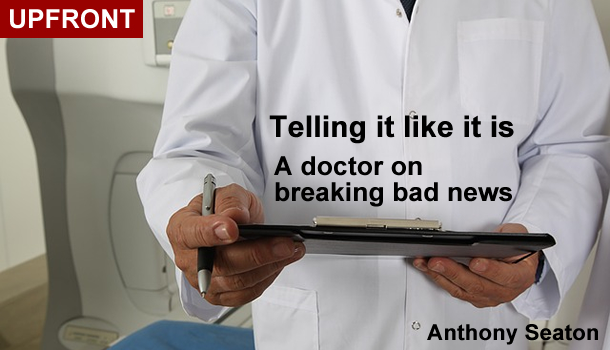 I was saddened to read Barbara Millar's account of her being told mistakenly that she had cancer. There is no excuse for such a blunt approach and it is good to read that in the Glasgow medical school the students do receive training in giving bad news. However, as someone who has been in the position of both giving bad news and receiving it, also in my case an incorrect diagnosis, I should not wish readers to think training will solve the problem. But it should help.

In my day there was absolutely no training either in giving bad news or indeed in the management of dying. As a young doctor, I soon learnt that it was everyone for him or herself. Our seniors often left it to us and we had to manage as best we could. I bought a book on dying and learnt a lot about the process from it, but mostly I learnt from actually speaking to patients and passing on the unwelcome news.

I'm afraid that I have had to do this very many times over my career and there is one thing that I can say – it never gets easy. Everyone is different and takes bad news in different ways, some with stoicism, some with shows of emotion, some with shocked silence. Some wanted their partner to be with them and some begged me not to tell them. One important lesson: to tell a person they have cancer or a serious disease is never enough. It must always be followed by explanation, if possible with a close friend or relative present in a quiet place, and the explanation must include the important information as to how you are going to help the patient to deal with the problems likely to be faced.

Well, I hope that sounds reassuring. When I was a youngish consultant I was in the happy position of working in a hospital with plenty of beds and nurses, so that I could tell patients that I would take care of them at the end if it became necessary. Then along came the businessmen who wanted to run the NHS like a large shop. The number of beds was reduced, nurses were less readily found and doctors started working regular hours.

We were told that we had so many minutes per patient in our clinics. One morning I over-ran severely – among the 15 patients I saw that morning, I had to tell two that they had lung cancer. Another one had a heart attack in the waiting room and I had to resuscitate him. That evening I read in the newspaper an attack on the self-interested behaviour of doctors, written by a hospital administrator; he was going to see that in future the NHS put patients first, a slogan he had picked up from the current minister of health. I saw the writing on the wall.

The moving finger writes; and, having writ,
Moves on: nor thy piety or wit
Shall lure it back to cancel half a line
Nor all thy tears wash out a word of it.

The essence of telling is having time and space. Alas, the unwillingness of the population to pay sufficient tax to ensure that NHS employees have the time and space to practise good medicine means that things are getting worse, and I am afraid the risk of careless and apparently cruel communication is increased, however well we train our students. And God help us all if this mad Brexit drives many of our wonderful foreign nurses and doctors away from an NHS which increasingly relies on them.