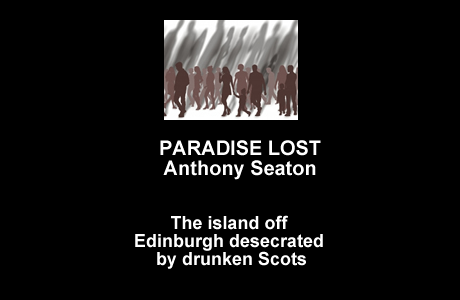 When descending to Edinburgh airport over the Firth of Forth, you may have noticed to the right of the flightpath an uninhabited island, connected by a causeway at low tide to the village of Cramond, west of Edinburgh. It makes a pleasant walk from the shore with good picnic places and views of the Forth.

The romantic speculate that it may have had a significant role at the time south-east Scotland and north-east England formed the kingdom of the Gododdin, the skeletons of nine possibly noble victims of violence from the 6th century having been unearthed close by in the site of a Roman bath house in Cramond. The less romantic note the ruins of fortifications erected against German invasion in the wars of the 20th century. But today it is only a popular two-hour walk for visitors, who must take care to avoid being caught by the incoming tide.

I recently took two young Taiwanese friends to the island to show them around and do some painting. It proved embarrassing; the popular picnic places over an acre to the northern end were completely littered with many hundreds of broken glass bottles and empty cans, and a ruined building was decorated with racist graffiti. Almost no bottles remained intact and most had been smashed into small pieces – deliberate vandalism. The labels on the bottles indicated the root cause of this wanton behaviour.

We were not the only ones who had noticed this and a group of university students volunteered to join some local people in trying to tidy the place up one Sunday afternoon. The students were from several different nations and for some it was their first introduction to the concept of tides, recalling the experience of the Romans when they first landed on our islands. It was back-breaking work but over three hours at low tide almost a tonne of broken glass, cans and other litter were cleared and transported to the mainland where they were removed by the local authority.

I couldn’t help reflecting on people’s behaviour. I can easily understand why a group of youngsters might go for a party in an isolated place and drink too much. I suppose many of us have done this in our youth. I can understand why they might leave their litter, though I hope most of us would not have done so. But what on earth persuaded them, having drunk the alcohol, systematically to smash the bottles and ruin the place for future visitors? Was it drug-induced psychopathic behaviour? At least there was no blood to be seen and no bodies were found; the bottles had been smashed on stones or on each other, just for fun. What might a future archaeologist, excavating this area after climate change has eliminated our race, make of the society that left such relics of its culture?

As these dark thoughts came to me about today's youth, I looked around and saw bright young people busily picking up the pieces of glass; Spanish, Italian, Chinese, Polish, asking us local folk about the history of the island and of Cramond, the Italians being surprised to hear that their countrymen had settled there around the year 200, the Chinese surprised that the history of settlement in Cramond goes back to the Mesolithic period. What did they think about their Scottish contemporaries?

That Sunday I saw the good and the bad in all of us. I recalled my grandmother’s admonition to keep the black monkey off my shoulder when I was up to mischief. That ubiquitous black monkey is ever present, whispering in our ear 'Go on!' It is apparent as clearly in the antics of the Bullingdon club as in the littering habits of feral youth, in the psychopathic behaviour of captains of industry as in those who cheat the benefit system, in the freeloaders who abuse our trust in sporting bodies as in the athletes who take drugs to cheat their opponents. These are all sins of commission, but the black monkey also whispers 'Why bother?'

Omission is as great a misdeed and is particularly characteristic of our society. It implies a carelessness about how our lives in pursuit of wealth and pleasure impact on those of others. The evolutionary success of the human species has depended as much on cooperation to the common good as on selfish aggression. In these troubled times, as the dispossessed migrate across the world and as terrorists try to spread fear to advance their ignoble causes, we need to remember the good that is in all of us. We can all play our small part.

Kenneth Roy
We are all doomed: the experts who spread
the politics of panic

Walter Humes
DIARY
Secrecy of the dons: what do our universities have to hide?