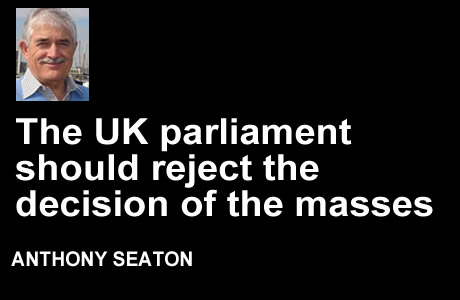 Monday 20 June
Referendums, referenda, whatever. Let’s have no more of these gerunds. I am writing three days before the vote. A week ago, driven to distraction by the obvious motives of power-hungry politicians and the self-interest of business people, and infuriated by the unthinking aggression of mostly middle-aged members of the public on television interviews, I posted a short appeal on Facebook warning of the past consequences of demagoguery as now exemplified by Trump, Johnson and Farage. Such stupidity, speaking of simple solutions to complex problems, appeals especially to the unthinking; it rouses rabbles and has led in the past to the rise of dictators, notably in the 1930s. The next day Jo Cox MP, one of the very best of human beings, was brutally murdered by someone allegedly calling out 'death to traitors'. I wept on hearing the sickening news.

Even in our flawed democracy we still elect most of our politicians (not those in the House of Lords), including those in the European Parliament. We have a say at all three levels in Europe and still, believe it or not, make our own laws and strongly influence those emanating from the EU. Our regulations on workers’ rights and the environment are wholly beneficial to most of those who threaten to leave Europe, excluding those who wish to exploit their employees. Europe in my personal experience has moderated the right-wing inclinations of successive recent UK governments in these areas. But many people who otherwise support Labour seem not to understand this. Why not? There is a pretty simple explanation, the power of popular newspapers to present one side of the story, combined with a loss of trust in politicians following repeated scandals and the knowledge that they speak with forked tongues, thanks to the activities of so-called spin doctors. Given a politician or the Sun and Daily Mail, most people seem to believe the paper.

I shall shortly have endured four referendums and have had four too many. These last two have been the worst; both have been extremely divisive and resulted in aggression and ill-feeling. Anyone who openly supported the In option in the Scottish referendum will have come across the aggressive behaviour of the cyber-nats and accusations of being unpatriotic. The unthinking hostility of ordinary people supporting out in the present one is obvious to all who watch television. For the next three days I shall only watch football, in which I have no interest, on television, and pay no attention to politics on the radio or other news media. I am praying for a victory for good sense and a strong UK in Europe.

Saturday 25 June
I did listen to the radio and heard nothing about the important issue of consequences, just blind optimism or pessimism. Waking at 4am yesterday I heard the awful news and realised with dread that the snake-oil salesmen and quacks had really managed to sell their poison to the population and the poor, the disaffected, and those with poor education and weak abilities to reason had swallowed it.

Later it became apparent that fewer in Scotland, unsurprisingly, had been gullible. It took me a day to be able to think clearly. Enormity is a commonly misused noun nowadays, but this has been an enormity enacted on the victims of successive British governments since Thatcher by the latest and least impressive of these, a deceitful attempt to switch blame for austerity onto Europe. I heard Johnson, plump and plummy but looking anxious and bedraggled, claim that we would remain part of Europe, united and heading to a glorious future. Part of Europe, united? How deluded can this man be?

My friends in England and Wales emailed me wishing that they lived in Scotland. Members of my multinational family discussed the value of their other passports or considered applying for the nationalities of their non-UK parent. As Maynard Keynes said, when the facts change it is acceptable to change one’s mind. I decided that, in spite of my previous strong opposition to Scottish independence, I would now vote for it if given the opportunity and, on cue, Nicola Sturgeon announced that she would be doing so. So maybe there is a way ahead for us.

I left Scotland on the 24th for a short holiday in the Isle of Man, my wife’s county. Is there any benefit to Manx nationality? Maybe Tynwald has some special agreement with the EU? Apparently, my friends told me, they have an agreement with the UK that gives them access to the EU on our terms and that they will lose this when we leave. No-one asked them to take part in the referendum, but they would like to join Scotland in a bid for remaining. And what about Northern Ireland? They returned a Remain vote like us; is there a case for the Q-Celtic nations remaining in the EU? Then there is London, the most cosmopolitan city in the world with 50% of its population from elsewhere.

Is there any hope? The reality of what they have done is quickly dawning on the people who voted out. There is no longer a need for the BBC to appear impartial. The newspapers who proclaimed a glorious regaining of sovereignty and independence will have to confront the fact that they have promoted to power a bunch of power-hungry rich men, even less sympathetic to the condition of the poor and the provision of a welfare state than those they replaced, and have ushered in a period of economic decline to make life even more difficult. It is already apparent that those who pressed for a referendum haven’t a clue how to proceed. I suspect a second referendum tomorrow would produce a different result but of course that won’t happen. England is staring into the caldera of a volcano that may erupt and result in revolution when the people realise what they have been sold.

I expect that we shall be able to jump into our independent Scottish lifeboat but I retain a great affection for the country of my birth, the one that afforded professional opportunities to my Glaswegian great-grandfather and allowed his escape from the slavery of the loom. The death of Great Britain after 300 years is tragedy. Perhaps, just perhaps, there is a way out. At the last general election we voted for our Westminster representatives. A large majority of us voted for MPs who did not have any intention of holding a referendum on Europe, a matter of no real interest save to a small rump of disaffected Tory MPs.

Since the removal of Charles I, parliament has been de facto sovereign in England. Surely our representatives should debate the practical issues arising from the referendum result and vote on whether or not to accept the choice of the people. I recall that some decades ago, when capital punishment was abolished, there was a debate as to whether there should be a referendum and it was decided that our elected representatives should decide for us; a referendum then (and probably still now) would almost certainly have resulted in retention of execution. We elect MPs and MSPs to decide on these difficult issues in the interests of the nation and in light of all the expert information that they can acquire.

In putting us in the position we are in, in having a referendum to solve a difficulty in one political party without doing the classical risk assessment that the civil service once performed, our MPs and our disastrous prime minister have signally failed the United Kingdom. They should be given one last chance to show courage and reject the decision of the masses for the good of the nations that constitute it. History will be their judge.