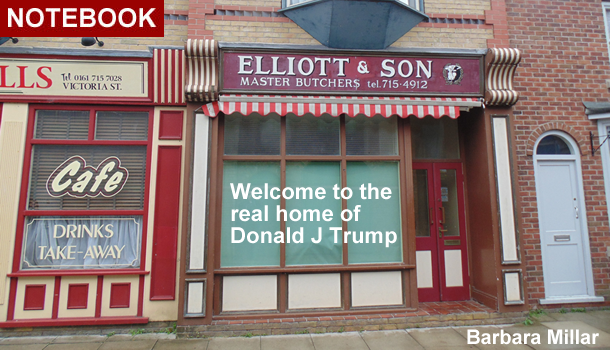 Forget everything you think you know about Donald J Trump. Ok, apart from the fact that he’s the 45th president of the United States of America – that aberration is, sadly, only too real. But the bits about him being born and brought up in New York, grandson of a poor Lewis fisherman, son of a German-American real estate developer.

None of that is true. Because Donald J Trump can be none other than Frederick Handel (Fred) Elliott, the bald, bombastic, former butcher of Weatherfield (as in he ran the butcher’s shop, not that he massacred the residents of Coronation Street). No-one else on the planet sounds like Donald J Trump. Except Fred Elliott, the 'Square Dealer' (Mason, natch) and all-round mover and shaker, who trod the cobbles for 12 years but who hasn’t been seen, I say he hasn’t been seen, since 2006.

This is because he has been undergoing a metamorphosis into Donald J
Trump.

Fred’s characteristic was to repeat – loudly – everything he ever said (see above), which seems to be one of the cardinal rules by which Donald J Trump operates. All politicians repeat themselves, of course, but Trump repeats himself in an entirely different way. 'He repeats phrases, one after the other, often in the same sentence,' says Mark Liberman, a linguist at the University of Pennsylvania, quoted in Vox magazine. 'It’s almost as if he can’t bear to stop talking, even for a second so, instead, he repeats what he just said until he can figure out what to say next'.

University of California cognitive linguist George Lakoff adds that Trump is too distracted by 'the pleasure and theatre of vocalising to deliver any factual substance. Regardless of his familiarity with the topic in hand, Trump will luxuriate in all the "let me tell yous" he can throw into his sentences to draw attention to the fact that he is talking'.

But Fred, described by the Guardian as the second-best Coronation Street character (they don’t mention who was first choice), was himself channelling another character – Warner Brothers’ classic animated chicken Foghorn Leghorn, also had the same loud and overbearing voice. In turn, Foghorn Leghorn, who appeared regularly in Looney Tunes, was based on Senator Beauregard Claghorn, a blustery Southern politician who was a regular character on the hugely topical Fred Allen radio show in the 1940s and who responded to any question with a rapid stream of talk, shouting and repetition. So, Donald J Trump appears to be a parody (Northern butcher) of a parody (cartoon rooster) of a parody (good ol’ boy). He talks like an 11-year-old with almost 80% of his words monosyllabic, the most regularly used being 'I, Trump, very, China and money'.

The cartoon rooster adopted many of Claghorn’s catch phrases, such as: 'that’s a joke, ah say, that’s a joke, son'. Which, unfortunately, is rather like the idea of Trump’s presidency.