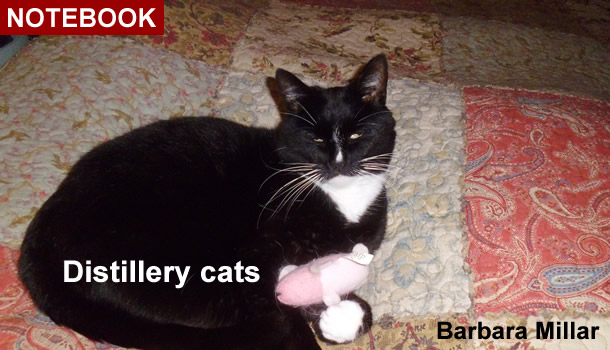 I saw an advertisement the other day, and knew immediately who would be the ideal candidate for the job. Dexter. No, not some bone-idle son I am trying to prise from under my feet into gainful employment. Dexter is a cat, one of six I own (yes, think mad cat woman if you will, I prefer ailurophile) and a fearsome hunter. He's the one in the picture.

The advertisement is for a 'friendly, hard-working and diligent' cat for the soon-to-be opened Lindores Abbey Distillery near Newburgh, Fife. Sadly, I don’t think any of those desired feline qualities could be attributed to Dexter – friendly...very much on his terms, as likely to bestow a gratuitous hiss as he is an appreciative purr; hard-working and diligent...he’s a great mouser, for sure, but will only go out if the weather is clement, if he’s had his full 18-hours kip and if there’s no catnip on offer.

So Dexter won’t become a distillery servant any time soon. But there is a long and rich history of distillery cats and the new recruit for Lindores Abbey will soon be ready to join their illustrious number. A few years ago Elvis, the distillery cat at the Jura Distillery, wrote a blog in which he confessed never to having caught a mouse for the previous four years...and yet he was still on the payroll. Barley, who used to prowl the premises of the world’s most northern Scotch whisky distillery, Highland Park on Orkney, was never replaced after he was killed by a car following 15 years of loyal service, the distillery owners citing 'health and safety considerations' for their lamentable failure to secure a successor. Barley, who had worked alongside his siblings Peat and Malt, was believed to come from a line of distillery cats stretching back to the origins of the distillery in 1798.

Smitty, of Jamesons Distillery, is of a similarly ancient vintage, his arrival stretching back to the founding of the distillery in Dublin in 1780. Smitty died many decades ago (obviously), and it is his stuffed (and I would have to sue the taxidermist) body, positioned astride the rafters in the old barley room. It gazes balefully down (with eyes far too wide apart) at any mice below, who, no longer devoured at Smitty’s prodigious rate of 20 a day (though cats are masters of exaggeration), are presumably now enjoying life at party central.

Dizzy, rodent router at Glenkeith Distillery, arrived half-dead in a crate from Kentucky, surviving four weeks in transit. He was mouse-master from 1993-1999 when the distillery closed – his whereabouts now unknown. But the distillery which claims to be the oldest in Scotland – Glenturret – also boasts the ultimate cat legend, Towser, who in her 23-year working life caught 28,889 mice – an average of three a day. Towser’s extraordinary skill earned her a bronze statue at Glenturret and a place in the Guinness Book of Records. It is claimed that adjudicators from Guinness observed Towser over a number of days and extrapolated the total number of mice caught during her reign by a statistical technique based on their observations. I prefer the story that she left every single one of their tails as a testament – and a warning.

I never met Towser. But I did make the acquaintance of one of her successors, Amber (Nectar, her sibling having long since walked off the job). Amber, a stately 19 when I encountered her, used to sit in the visitors’ centre, begrudgingly accepting a tentative stroke of her fur. When I asked how on earth she had followed Towser’s impressive example, the answer was that she hadn’t ever caught a single mouse. A distillery cat may be at the heart of any whisky company – but it doesn’t follow that they will necessarily do any work.

In opposing Trump, we shouldn't
let the rage boil over
ALAN MCINTYRE