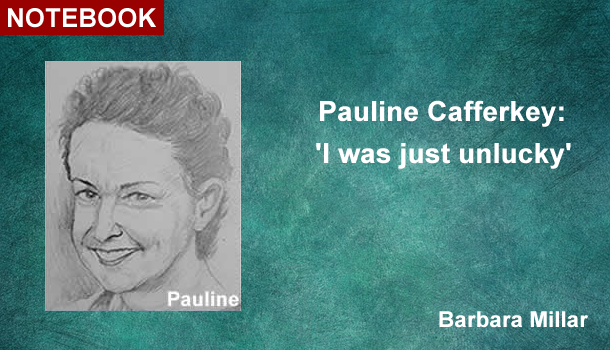 She chooses not to appear on public platforms, she doesn’t give interviews, and she longs to return to her previously 'normal life'. But Pauline Cafferkey, the Scottish nurse who survived being infected with the Ebola virus, made an exception to her rule when she spoke at St Andrews University in a fund-raising event for Medecins Sans Frontieres, an organisation she supports.

Ms Cafferkey was in a group of 30 British health professionals – doctors, nurses and paramedics – who volunteered to be among the first tranche of aid workers to assist staff at an Ebola treatment centre in Kerry Town, Sierra Leone, in November 2014. But she reckoned without the lack of oversight of the various NGOs working there. 'There was no overall body overseeing the NGOs, which were all managing patients in very different ways', she told her audience.

She and 10 others in the British group were initially assigned to work with an Italian NGO. But, after a few days, the group switched to work with Save the Children ‘which had very different practices...They were much more realistic’.

The average Ebola ward comprised eight to 10 beds, with a couple of patients usually nursed on mattresses on the floor as they were
delirious and confused, so likely to fall out of bed. There was almost always a screen around at least one person who was dying. The eight-hour nursing shifts were tough, as all staff had to wear cumbersome suits, or PPEs – Personal Protective Equipment. ‘You could only last an hour wearing the suit before you needed air', said Ms Cafferkey, ‘so in an eight-hour shift actual patient contact was limited to about three hours'.

Nevertheless, during the short time she was in Sierra Leone, Ms Cafferkey and her colleagues witnessed huge improvements in survival rates. ‘Some days there were no deaths at all, and many more people were discharged'. She left encouraged by the difference she and her team members had seemed to make.

But she flew back to Britain with the virus, and into a controversy that she has only recently been allowed to speak about. She had developed a fever by the time she arrived at Heathrow Airport. However, the Public Health England policy, which was meant to be followed by health professionals who were dealing with those returning, meant she should have had her temperature taken by a doctor or nurse, and then have been sent straight to hospital when it indicated she was running a fever. Instead, she was allowed to take her own temperature and, even though she reported that it was high, she was permitted by a Public Health England doctor to fly on to
Glasgow.

Later, following Ms Cafferkey’s emergency admission to London’s Royal Free Hospital – necessitating transfer by an RAF plane – it transpired that the Nursing and Midwifery Council (NMC), her regulatory organisation, was considering striking her off the nursing register, alleging that she had concealed her raised temperature at the airport. This was a clear-cut case of blaming the patient when it was the system that failed, Ms Cafferkey said. ‘Finally, I can speak about it'. Recently the NMC cleared her to continue practising, claiming that her judgement had been compromised by her developing illness.

Ms Cafferkey survived her initial serious infection, thanks, she says, ‘to the magnificent staff’ at Royal Free. She has also survived two further relapses, which again involved rapid RAF transfers back to the Royal Free.

She is now getting her life back on track and has resumed her post as a paediatric community nurse. ‘I have had some survivor’s guilt', she confessed. ‘Why did I get the best care and treatment in the world, when things were so different in West Africa? But I would not want to put anyone off aid working. If you have the chance, it’s the best thing you can do. I was just unlucky'.