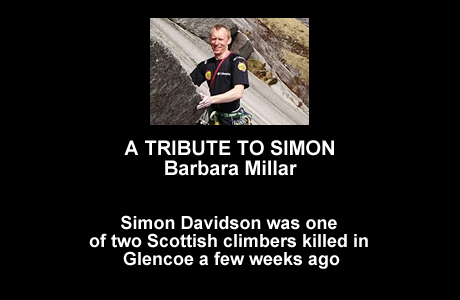 Simon Davidson was killed in an accident in Glencoe on 16 January 2016. He was 34 years old. He, with his fellow climber and member of Glencoe Mountain Rescue Team, Joe Smith, were brought back from Stob Coire nam Beith by 16 members of the team, who went out in dreadful weather that night, up to 2,300 feet, to bring the men home.

Simon was born on 25 September 1981 in Middlesex, where he spent his early years living in a houseboat on the Grand Union Canal with his parents – Esther and Conrad – and older sister by one year, Jessica. He was an adventurous spirit from the start and, once the family had moved into a house in Uxbridge, close to where Conrad was based with the Central Band of the RAF, in which he played, Simon would use skipping ropes to ascend to the upper landing of their home, and cushions from the sofa would become sledges to descend the stairs. He also permanently had a small brown leather case packed with essentials for an adventure – a little blanket, an alarm clock, a torch, and his precious Teddy.

His sister has described their childhood as 'idyllic, full of fun and adventure, play and sunshine’. There were weekend walks in the countryside with their parents, looking at wildlife and climbing trees and, much later in life, Simon would often send his mum a photo of some obscure plant or insect and ask: what is this?

In 1989, when he was eight, Esther and Conrad separated, and Esther brought the children back to her native Scotland, initially living in North Berwick, before moving into Edinburgh. Simon attended Law primary school, where he quickly ditched his London twang, adopting such a convincing Scottish accent that he was asked to read a Burns's poem at a school event. He also joined a Gaelic choir and sang in the Mod. His mother would come across him practising his Gaelic and confessing that he had not a clue what any of it meant.

He also took up the trombone and played with the Scottish National Youth Jazz Orchestra, and was lucky enough to attend the Montreux Jazz Festival with the orchestra when he was in his teens. He also got a taste for heavy metal and rock music and, with friends, he formed several bands with memorable names – Redeem the Dissentery (sic), Degenerate Youth and Hemloc (sic). His mother recalls attending some of his gigs and having to stuff tissue paper into her ears to get some relief. A friend describes his playing – Simon was on drums – as 'talented but unconventional’. More than once, when the band was playing live, Simon would not know what song was being played but would drum on regardless.

Simon left school with Highers, including maths, and decided to complete a maths degree at Heriot-Watt University. He spent most of his first year absolutely loathing his course and only later realised he had been attending the wrong maths lectures. His mother persuaded him to give up the course and enrol at Telford College, to study other courses which would, incrementally, give him a tertiary qualification. He later went to study at Napier University where he received a first-class honours degree in digital media.

After completing his degree, his mum took him on holiday to Spain but found it most odd that, despite the incredible heat, Simon seemed prepared to risk heat stroke rather than remove his T-shirt. He wouldn’t swim, or sunbathe or do anything that might risk exposing his arms and torso. Much later she discovered he had had an enormous tattoo of a Chinese water dragon and he knew his mum would be horrified when she found out – so he intended to delay the discovery as long as he could.

He went out to Greece with a friend when he was 19. His father was living on the Greek island of Thassos, so the pair had six months working out there, earning their board and lodging by washing up in a restaurant in the evening and hiring out sunbeds by day. They also spent a month helping Simon’s father to renovate a house. When they came back, they both realised that no office job, no 9-5, would ever suit them.

Simon started climbing in his early 20s, when the Ratho Adventure Centre (now the Edinburgh International Climbing Arena) first opened, with the biggest indoor climbing wall in the world. Very quickly this turned into a serious hobby, and something Simon focused on. He had always spent weekends in the hills with friends, camping, drinking beer and listening to rock music. Climbing added a new dimension and he relished the challenges and opportunities it offered.

In order to fund it, Simon had to work. During his university years, he had spent the summers working at the Edinburgh International Film Festival, something he loved. Although on one occasion, when he was meant to be supervising the projection of a film, he managed to miss the fact that it was being shown upside-down.

When he graduated, he secured a job with Metro, a technical production company based at the Gyle, where he was able to use his digital media skills to great effect. But, after five very happy and productive years there, he decided his heart was in climbing and he made the decision to leave. He also rented out his flat in Winchburgh in favour of a more peripatetic life, living in his van.

He had a few temporary jobs, cleaning windows and also as an ambulance driver. He liked the job but hated hanging about, drinking tea and eating cake, and waiting for the next call. He did some freelance work with Span Access, a Kinross-based company involved with rope access and rigging, and this enabled him to get some work helping to erect wind turbines.

So where did he climb? He did a wonderful walking and climbing trip in the Pyrenees in 2009, he climbed in the Andes and explored the South American jungle. But his heart belonged to Scotland. He climbed Ben Nevis, always by the most difficult routes, he climbed in Glencoe and Cairngorm. But his favourite place was the Cuillin mountain range on Skye. He was thrilled by the excitement of climbing and delighted by the camaraderie he encountered from his fellow climbers. It is a tight-knit community where trust is paramount as, so very often, your life is in someone else’s hands, and their life is in yours. Friendships are built and valued. Simon had worked for many years with young people undertaking the Duke of Edinburgh’s Award Scheme and he planned to develop his fledgling business – Garbh Mountain Adventures – to offer instruction and family holidays in the mountains.

Simon had completed more climbs in his 34 years than most people do in a lifetime. He loved being out in the winter – ice-climbing had become his speciality. He was experienced, he was meticulous, he was very careful. He understood the mountains, and he respected them. He had climbed with young Joe Smith before. He had climbed Stob Coire nam Beith before. 16 January was a beautiful day – cold and clear – but then a front came over and it began to get dark, much earlier than anticipated.

No-one knows how the accident which killed Simon and Joe occurred. But that Simon died doing something he adored is of comfort to the family and friends who mourn his untimely death.

Last year, he took his mother up Ben Nevis for her first time. When they were on the Ben, he pointed out some snow buntings. Esther, his mum, urges his friends, when they see the snow buntings, to remember Simon. 'Carry on climbing, and carry his memory to the highest places’.