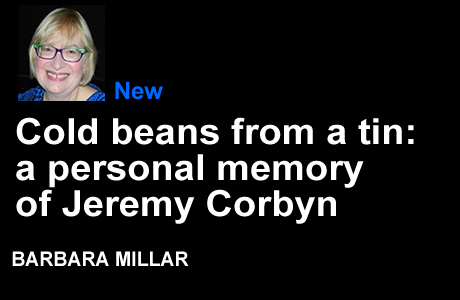 The mutt – Mango – was adorable and in retrospect probably had more political nous than his master. I met Mango back in the 1970s. I was studying at London University and needed to supplement my grant. I’d started work with Wood Green Labour Party as an assistant to the secretary, Vic Butler, whose wife was the local MP, Joyce Butler. It involved a lot of (bad) typing and extensive use of a Gestetner [an old-fashioned duplicating machine named after its inventor David Gestetner – Ed].

Which is about all I had in common with Mango’s master. I met Mango’s mistress first. Jane Chapman was chair of the council’s housing committee and it was through Jane that I met her husband, Islington MP Jeremy Corbyn, and their dog. As soon as Jeremy became Labour Party leader last year, the press went to Jane Chapman – long-divorced from him – for her fond memories of her former spouse. She didn’t have any.

Jane recalls the extensive use of the Gestetner and his charming habit of eating cold baked beans straight from the tin. He may have ostensibly been a Labour MP but, as far as I could make out, he was unreconstructed Trot. And I kind of knew how to recognise one – my then boyfriend, later husband, later still ex-husband, was one too.

Do you remember the 70s? If you were on the political far left, you never had many friends. There were lots of parties for you to choose from, with no discernible differences in their ideology. But the International Marxist Group (IMG) didn’t talk to the International Socialists (IS) who in turn didn’t talk to the Workers Revolutionary Party (WRP) who similarly eschewed Militant.

Harry, my ‘comrade’, was a member of a splinter group, The Organising Committee for the Reconstruction of the Fourth International (OCRFI), if you will. But all of these groups practised ‘deep entry’ in the Labour Party, all biding their time before making their disruptive move within a party they actually hated.

I wonder if Jeremy hates the Labour Party. There’s little evidence that he loves it and he is certainly doing his best to wreck it. He has been waiting a very long time to cause the permanent damage so close to the Trots' hearts. No wonder I only have fond memories of his dog.