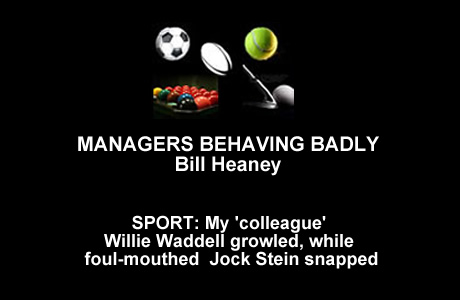 Fly the flag, they used to say. And sing up! Nowadays there’s usually a health warning attached to that statement: Do so at your own risk of ending up in jail. The current controversies over football and Graham Spiers' sacking by the Herald brought back memories, mostly bad ones, of assignments I was given as a young reporter to cover stories involving Celtic and Rangers.

One of the first of these was in the mid '60s when I was covering Ayrshire for the Scottish Daily Express. I was sent to Rugby Park, Kilmarnock, after Celtic supporters shinned up a flagpole behind one of the goals and stole the League Championship flag which, remarkably, Kilmarnock had won for the first and only time in their history in 1965, under the management of the ex-Rangers winger Willie Waddell.

My assignment was difficult since the incident happened near the end of an evening floodlit match and the large crowd was streaming out of the stadium before I got there. But I had a stroke of good fortune – or at least I thought I had. Willie Waddell had, despite his managerial success, quit Kilmarnock to become a sportswriter with the Express and he was covering the match. He would have seen everything that had happened from his seat in the press box and would be helpful. Or so I thought.

I battled my way through the departing crowd to the main stand, dodged the doorman and made my way up the stairs to the boardroom, where Waddell and the club directors were having a post-match drink with Kilmarnock’s new manager, Malky McDonald.
Malky himself was a personable fellow for a football manager, and I got a few quotes from him. However, as the 'suits' began to tune in to our conversation, he became agitated and asked what permission I had to be there. He then suggested I should leave – immediately.

I pointed out that I was Waddell’s Express colleague from the newsdesk and suggested that if there were any developments (I don’t think the flag had been recovered by then) he could maybe let him know. I then told Waddell who I was and added that that the editor, Ian McColl, had asked me to team up with him on the story. Waddell simply growled and looked at me as though I was something that he had accidentally trod on. He did nothing to prevent me being ushered out of the boardroom. And he added absolutely nothing to the news report I sent from a telephone box at the end of the street. I never did hear from my 'colleague' again.

So far as Jock Stein is concerned, I remember being sent to Prestwick Airport in 1968, with photographer Ronnie Vavasour, to cover Celtic’s homecoming from a tour of the United States. Ronnie got great pictures of the players being hugged and kissed by their wives and girlfriends. I recall Tommy Gemmell being particularly helpful and that I noted down a few innocuous quotes to make a story. Suddenly, Stein appeared on the scene scowling and asking us what we thought we were doing. So, I thought I had better ask him a question about football, which wasn’t really my remit.

There was to be an international match against Portugal on the Saturday and the morning papers and radio had reported that Celtic’s Steve Chalmers and John Clark, who had been chosen to play in that game, were doubtful through injury. Would they be fit to play?, I asked. Stein snapped: 'Of course they’ll be effing fit. The reports are rubbish'. The assembled clique of sportswriters, who had filed this 'story' from the States, laughed out loud at me for being so naïve as to believe that one of their reports might be true. They had all gone native, fans with typewriters.

Jock Stein was enraged with another story I did about him after the European Cup final in 1967. Celtic were at that time notoriously tight-fisted. It was the era of the 'biscuit tin' in which they were alleged to keep all their money. It became clear that the Lisbon Lions were unhappy with the bonus money they received from the club for their historic win. Stein wasn’t backing them in their talks about this with club chairman Sir Robert Kelly and the Express had been tipped off that this was because he himself had been 'well looked after' by the club.

I was asked to make inquiries. I found out that Sir Robert was an executive of the Eagle Star insurance company which had offices in St Vincent Street in Glasgow. And that members of the company’s staff were said to be talking quietly – but publicly – about a deal Sir Robert was said to have done for Stein. The story went that Stein was to receive what was known as a 'top hat' insurance policy. This would mature a few years down the line and give the manager a tidy sum to see him into a comfortable retirement. This was Stein’s Lisbon bonus, or so the word on the street had it.

When this was put to Celtic, they were furious, not just with the people who had leaked the information but with the Express itself for even contemplating publishing it. The Express would be banned from Celtic Park if one word of it appeared in the paper, I was told. Stein would be upset and wouldn’t talk to the paper again ever. A short time later, the Express news editor, Ian Brown, told me the story had been spiked because neither the newspaper nor the club wanted to upset Stein. A few years later Celtic, so protective of their manager at that time, eased him out of his post. And to Stein’s great chagrin – and the huge dismay of the club’s fans – offered him a job in the Celtic Pools office. Naturally he used a gambling metaphor when he told them to go and raffle themselves and headed off to Leeds United.

Stein was still around though in October 1968, when Rangers played Dundalk, a team from the Republic of Ireland, at Ibrox Park. I was sent to the St Enoch Hotel in Glasgow, where Dundalk were staying, with a question for the club chairman, Vincent McKee. It was this: Would he be asking Rangers to observe the normal courtesies in these European matches, one of which was that the host club should fly the flag of the visiting nation?

Vincent was very personable. We had a chat over a drink. He said he hadn’t thought of it, but he would ask Rangers to do it. A few hours later he said they intended to meet his request. They had borrowed an Irish tricolour from Jock Stein at Celtic and it was being sent over to Ibrox. I got off my mark with my photographer, Tommy Fitzpatrick. We would have to get some kind of picture. This was history in the making. It would be the first time ever that the Irish flag had been flown at a Scottish football ground other than Celtic Park. And that ground was Ibrox.

We reached the stadium just as a black taxi cab drew up. The driver stepped out with a large brown paper parcel which he took inside. An elderly man with spectacles, a cloth cap and dungarees met the driver in the foyer. It was the Rangers’ groundsman, Jock Shaw, and he took possession of the flag. I asked him – nicely – if we could get a picture of him running the tricolour up the flagpole but we were soon interrupted. Willie Allison, a Sunday Mail sportswriter who had been recruited by Rangers as one of the first staff PR persons in Scottish football, shouted from the top of the marble staircase telling us to stop. He then came down and ordered us off the premises. The f-word came into it and I have been able to boast ever since that I was ordered off at Ibrox.

When I reported into the Express office that we had failed in our mission, the news editor said other members of staff had been on the telephone to Allison. Since I was going off shift, they would now take over the story. This was probably what had alerted the PR man to the fact that I would be out there soon to doorstep him. Next morning, as I recall, there was a short front-page piece in the paper saying that the flag had not been flown. When I looked for that edition in the National Library of Scotland in Edinburgh it wasn’t there.

But I have since found out what happened from Vincent McKee. He told me the club had reached a deal with Rangers that if Dundalk did not insist that the Irish flag be flown over Ibrox, then Rangers would not insist that the Union Jack should be flown over Oriel Park in Dundalk. While the troubles in the north didn't start until August 1969, tensions at the time were running very high, so it made a lot of sense not flying the tricolour at Ibrox or the Union Jack at Oriel Park, according to Vincent. 'I don't think either flag would have been appreciated by both sets of home supporters,' he told me.

For the record, Rangers beat Dundalk 6-1 at Ibrox with Sir Alexander Ferguson scoring two of the goals. The Dundalk leg score was 0-3. Who knows what would have happened had the Irish tricolour been flown over Ibrox?

* While doing research for a memoir, I have discovered that nearly all of the newspaper cuttings relating to Celtic’s European Cup triumph have been torn out of the files and stolen from Glasgow’s Mitchell Library. And I have also been told that the only recording of Celtic’s 7-1 victory over Rangers in the League Final of 1957 has mysteriously gone missing from the film archives of BBC Scotland.

The editor adds (by way of corroboration): The two most offensive people I encountered in Scottish public life were Willie Waddell and Jock Stein. – KR