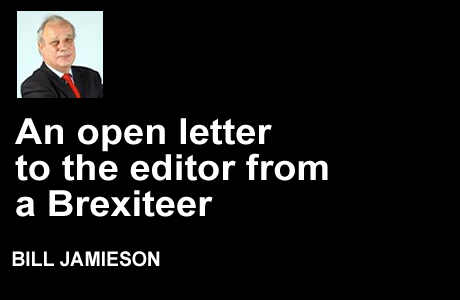 Now you would hardly expect me – veteran campaigner for an independent Britain since 1975 – yes, 1975 – to agree with your lament on the Brexit campaign. But as ever your eloquence and writing skills were such that the blade you wielded sparkled with diamonds. What can I possibly say, here on the other side of the Planisphere to you, Kenneth, from Bill, so close to your sentiments and yet … not just from Outer Centuri relative to where you are, but on the very edge of the Caledonian Falange?

I know that space will have prevented you from covering all of the other obnoxious weeds that have grown in this referendum garden of ghastly remembrance: the sight of 'Sir' Bob Geldoff shouting and flicking his 'V’ signs – by no means the crudest gesture as I recall – and the incisive, cutting edge contributions of that sage of contemporary thought, the Remain camp’s very own Isiah Berlin – yes, I refer, of course, to Eddie Izzard.

And let’s not forget that masterclass of persuasive reassurance and charm from George Osborne no less, who has threatened all manner of pain and agony, and said he would bludgeon us with tax increases and spending cuts as his budget 'cure' for the deep recession that would follow a Brexit vote. The very prescription that would make recession a certainty – did that not make your heart tingle, Kenneth?

And the honeyed words of that PR mastermind, David Cameron, saying one thing but meaning quite another? What a masterclass of unctuous assertion and reverse-pleading!

Oh, and let’s not forget those other voices that moved us close to tears – Anna Sowerby yelling at us that the recession would begin immediately – that’s immediately, in case we did not hear correctly from this emeritus professor of macroeconomics and graduate with honours from the Harvard Business School. Has not the independence reputation of the governor of the Bank of England been so enhanced in this referendum campaign? Every time our George kicked this poodle, my, how it barked! And were we not swayed by the persuasive interventions of Barclays, JP Morgan and Goldman Sachs? Really, Kenneth – the company you keep! I’d never have guessed!

And I’ll say nothing about the way our hearts melted at the very sight of Christine Lagarde, the Florence Nightingale of the IMF – friend of the Greek people, ever quick with the cutting knife and the instant jab of the austerity hypodermic needle for folk who don’t agree with her. And, yes, all those friendly cuddles and come-ons from Jean-Claude Juncker. If you had any doubts, any doubts at all, were they not put at rest when he appeared?

Yes, I too lament, Kenneth, I lament that we have come to this, that our very own champion of Scottish 'independence' could float the idea of our joining the euro without so much as a blush of shame. Was there not some iota of recognition about this contradiction – that our interest rates and monetary policy will be set…in Frankfurt, so beloved of the Greek people?

What have we come to, Kenneth, when this cringing apologia for government, this loss of confidence in ourselves, banged home nightly by the BBC, is so advanced as to weaken our sense of personal moral responsibility?

Best, surely, to leave our good intentions and fine works to mark those things in which we can take some pride to some EU regional fund to make our choices for us, happy in the knowledge that we know so little and that they know best? We’re never better, Kenneth, than we’re a nation of supplicants, too feeble in our own capacities other than to rattle that bowl and cry into the black void that is our Remain future: 'Aye, but whit aboot…?'

Yours through tears from another planet. But take comfort, Kenneth. In your plangent lament, you are not alone!

Next edition of the Scottish Review: 29 June 2016
Subscribe Today