Kenneth Roy's article (14 November) on punditry struck a chord. But 'pundits' inhabit the world their readers do, a world that now demands simplistic easy answers to complex multifaceted questions. This was best exemplified by the demands for 'more information' during the independence and Brexit referenda. In fact there was a plethora of information available; the only problem was that you needed to know what to do with it. What was actually being demanded was: 'Tell us what to do!'.

Many years ago a university friend of mine approached our philosophy tutor and told her he was considering taking the subject as his degree but was curious about what avenues this would afford him. She stopped, thought hard, hesitated, then replied: 'Well...I'm writing a book'.

I've often thought about this, but it's only been in the last few years since the advent of so-called 'social' media – and the access this affords to anyone with an internet connection to become a pundit – that I have truly begun to understand exactly what she meant.

I graduated with a distinctly unimpressive degree, but in the many years since I left Gilmorehill, I have treasured the training I received there. Not in my chosen subject (English literature), but in analysis: the ability to take a subject and address it from all angles, to provide an evaluation of the facts as presented to me, not only from the source material, but from commentators on that subject.

Under guidance from tutors, I started to spend hours in the library, reviewing criticisms from all sides of a subject, looking at how other views impacted upon the premise that was presented, before coming to my own conclusion that I would have to argue and present for evaluation. Cutting and pasting from Wikipedia was not an option in those days.

Having learned the principle, I started to apply it – to begin to challenge for the first time my own, immature, world view.

This world view was inevitably coloured by my upbringing, my parents' values setting the foundation upon which my school teachers impressed their own opinions, some positively (stand up, Mrs Bell) some negatively (sit down, Mr Pritchard) along with a widening circle of friends who had all helped form my own thinking up to that point.

Going to university gave me a sense of intellectual freedom that I had never before experienced. I became increasingly aware that until then what I had thought of as my opinions were in fact those of others. I had no critical facility, my father in particular being a man of very fixed views. I began to openly question my thinking and in so doing opened a deep rift with my parents who saw me as challenging absolutes and, by extension, their authority.

My attitude towards religion changed and having been a regular attendee of Bible class, a member of the Boys' Brigade and the youth fellowship, I consciously rejected the Church of Scotland. This precipitated a long-term fracture in my relationship with my mother. It only really healed some years later when my wife and I married in a registry office and she acknowledged that my wife espoused more Christian values, regardless of her professed atheism, than many in my mother's church.

My political opinions started to evolve, in fact it would be more accurate to say that they formed. Voting Labour was an unthinking testament of faith in our family and I started to examine alternatives and to examine what underpinned the different political philosophies. (My subsequent conversion to the cause of independence is based on my own considered evaluation of the circumstances we find ourselves in and not an emotional 'Wha's like us!' rant, and I am quite prepared to understand, accept and indeed respect why others do not share this view.)

I can clearly see the faults within the SNP. I understand the difficulties that Kezia Dugdale is facing and while I have great difficulty in squaring the circle of current Tory party acquiescence to UKIP (whose views, in direct contradiction to the content of this essay, I find intolerable and offensive on all levels), I genuinely believe that Ruth Davidson represents old school Conservatism based on the principles of service to the community. I admire Patrick Harvie's commitment and acknowledge the need for a green perspective on our treatment of our planet. (I do, however, struggle to see a purpose to Willie Rennie...)

I admire David Torrance's analysis and writing ability while disagreeing fundamentally with many of his opinions; I baulk on occasion at Kenneth Roy's polemics but salute his passion and underlying commitment; I read Michael Fry with one eye and find much of Kenny MacAskill's analysis simplistic and self-serving. I miss the genius that was Ian Bell and look forward to Iain Macwhirter's invariably thought-provoking consideration of prevailing economic thinking.

The point is that my opinions are formed as a result of my accessing the writings of such a diverse constituency of writers, many of whom I disagree with but whose ability to provide an alternative perspective forces me to question my own attitudes.

Most people, however, look to find reasons to reinforce their existing prejudice rather than taking the time and trouble to evaluate information that will help them to form their own answers. The tabloid press has always understood this, and Farage and Trump and others on the extreme right today are only the latest group throughout history to exploit it.

What is different now is that technology provides immediate pre-formed and packaged opinions as absolutes that are immediately reinforced and the facility exists to respond instantly and with personal invective attached. It is no longer enough to have an alternative opinion. The technological limitations of Twitter or blogs make a constructive response impossible and this has led to a situation where both the opinion and those who express it must be dismissed and ridiculed. The tragedy for me is that the ability to research, evaluate and analyse that I learned at university is now disparaged. Blogs and tweets have replaced considered intellectual challenge.

The claim that recent events are a repudiation of 'elites' is to invite the question of exactly what constitutes an elite. I was brought up in a council house in East Kilbride when nearly everyone I knew lived in a similar home. I was the first person in my family to attend university, like many of the other 500 students in my first year Eng Lit class at Glasgow University. I have since worked and travelled throughout the world and lived in Paris and New York. Am I a member of an elite? No, but I am a member of a cadre of people who were taught to think for ourselves and to express our views in a manner that respected the opinions of others. Current events have provided a frightening counterpoint to that.

'Whatever the Sea: Scottish Poems for Growing Older', edited by Lizzie MacGregor (Polygon)

The title of this anthology is a quote from Edwin Morgan's poem 'At Eighty'. This splendid title is matched by its striking cover – a watercolour by Olivia Lomenech Gill, seascape with boat in the foreground, and distant mountains. I lingered for some time admiring the cover before opening the book as I have to admit to a certain amount of dread faced with the subtitle. But I was agreeably surprised by the contents, with surprise quickly turning to pleasure and admiration at these contributions from 35 poets.

There's a great lightness and sense of fun to many of these poems. The writers have enjoyed several decades of life experience but it does not seem to weigh them down. On the contrary, most of these poems celebrate life. And even if the topic of infirmities does come up, as in Pauline Prior Pitt's 'Let me Not', it is treated with the kind of humour this poet is so good at:

Let me not be tempted
to talk incessantly about my illnesses;
the love of rehearsing them has become too sweet.

And more importantly
let others not be tempted
to talk in intimate details about theirs.

Several other poems use humour to encourage us to laugh at our foibles, such as Rody Gorman's 'Final Call' and Alison Prince's 'Bucket'.

Edwin Muir's 'The Way' is one of the poems which anticipates that there is no end, which addresses the spirit rather than the body it inhabits:

And what will come at last?
The road leads on.

Others are Sheenagh Pugh's 'Come and Go' and 'As Time Draws Near' by Iain Crichton Smith with its resonant ending:

It is time to turn the blow lamp on dogma
and inhabit this blue.

There's a disarming sense of honesty and authenticity about these poems. Because of the subject matter – or their relationship with the subject matter – the writers are often talking about their own experience but the self is very much the lesser character, the bit-player assuming an ad hoc appointment while the play is in the hands of the Director, whose authority could perhaps be ignored for a while, or a lifetime, yet who will inevitably signal the end of the production.

This humility is never grovelling however. It is sometimes wry as in Diana Hendry's 'Late Call' which begins 'Lord, this is pip-squeak calling', yet it blossoms into something heartfelt in the last two lines:

you could help me to age as beech leaves do,
transparent enough to let sunshine through.

There is celebration in Edwin's Muir's 'A Birthday':

Acceptance and gratitude
Like travellers return
And stand where they first stood.

And in Angus Peter Campbell's 'Codes':

O Lord, give me the strength of your code:
that it would be, despite the premonition,
as miraculous as all the rest.

...I fail to recognise
the title on the page.

..not to the silk-sellers,
the bearers of spice and gold.

….long, long look at the road I came,
So rough and dark and – splendid!

and Alison Prince's humorous and lovely sonnet 'Absent-Mindedness', which ends:

My absent mind is filled with the delight
Of sweet horizons and the heron's flight.

The styles and forms of the poems show great diversity – free verse, dramatic monologue, different rhyming schemes including a sonnet, and the editor is to be commended for selecting such a variety of forms, moods, and languages, as there are also poems in Scots, with a helpful glossary, and Gaelic, with translations into English.

I enjoyed every one of these poems, so much so it was difficult to select which ones to quote from; this collection was an unexpected delight. 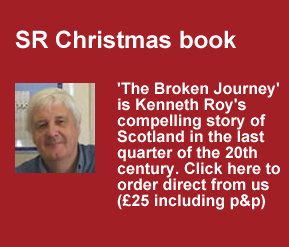