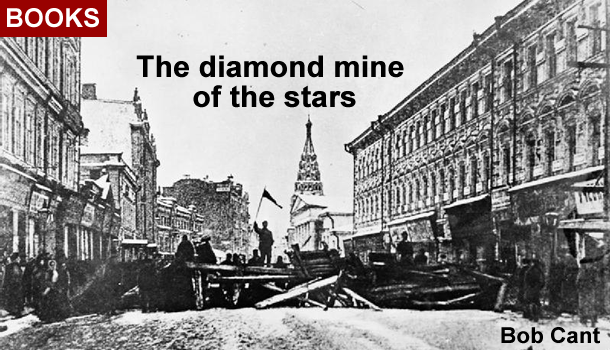 I never been able to empathise with Vladimir Putin before now, but I can see that he must have problems about the 100th anniversary of the Russian revolution. It has transformed not just Russia itself but the way in which world politics has been conducted for most of the last century.

Under other circumstances the 100th anniversary of the events of 1917 would have been celebrated with military parades through the streets of Moscow and cultural festivals in all the towns and villages of the Soviet Empire. What can Putin do? He can’t pretend that it never happened and he hasn’t yet denounced the media for 100 years of fake news. Another problem is that he rather identifies with some aspects of the Soviet century; he is said to be an admirer of Stalin and he must surely appreciate the discipline of the Communist party membership, both in terms of political activity and the world of work.

1917 itself is rather different: it’s all rather messy, disrespectful of political leaders and frequently contradictory. There were all kinds of political groupings, such as Mensheviks, Social Revolutionaries, Anarchists and, of course, Bolsheviks; while they were all variously opposed to the Tsarist regime, they were also frequently opposed to each other. It was a time of chaos.

The revolution is often said to have begun with a strike on 23 February when women textile workers protested about the price of bread and the suffering resulting from the war. At the time the Russians were using the Julian calendar, but they have since switched to following the Gregorian calendar and the 100th anniversary of the February revolution will, therefore, fall on 8 March.

'1917', a collection of stories and poems, illustrates the fluidity of thought among Russian writers between February 1917 and late 1919. Once the Bolsheviks had emerged victorious from the civil war and established some kind of domestic economic stability in the mid-1920s, literature became much more conformist. During the period covered by this collection, literature was unpredictable; troubled by events in the wider world but definitely unpredictable. What is clear is that all the contributors felt that it was time for change. Most of them were not Bolsheviks but there were no contributions calling for the maintenance of the status quo.

The contributor who was most committed to Bolshevism was the poet and playwright Vladimir Mayakovsky. He had identified as a Bolshevik for over 10 years and, even although the February revolution only ushered in a form of liberal democracy which was a long way from Bolshevik demands, he was optimistic enough to write the following:

The courses of planets,
the existence of states:
all are subordinate to our wills.
The earth is ours.
The air is ours.
Ours is the diamond mine of the stars.

There were others who, while not Bolsheviks, supported revolutionary change. Alexander Blok, the prominent symbolist poet, took a long term view towards the events of 1917 and saw them as an opportunity for the old corrupt order to be swept away by a 'purifying' fire. His poem, 'The Twelve', was said by some to confuse Bolshevism with Christianity but it was praised by Trotsky, even though he admitted that Blok is 'not one of ours'.

Mikhail Gerasimov was a poet of working-class origin who belonged to an organisation called Proletkult which saw the development of a distinct proletarian culture as a route to greater political activism. There was some mutual suspicion between them and the Bolsheviks but, despite his misgivings, Gerasimov was willing to give revolutionary activity a chance to generate change.

Fed by the dreams of Communism,
I stoked the furnace with new power,
intoxicated by its rhythm,
I forged my iron flowers.

Political satire does not usually win favour with authoritarian regimes, particularly if they are concerned about their own stability. Yefim Zozulya was a committed socialist but his satirical piece, 'The Dictator: The Story of Ak and Humanity', reveals his concerns about regimes which do not brook any opposition. Its opening paragraph refers to a poster which had been posted on walls in a fictitious city.

THE COUNCIL OF PUBLIC WELFARE has decided to reorganise life on the basis of justice and progress. For this purpose the COUNCIL will pass on the Right to Life of every inhabitant of our city. Those whose existence is found to be superfluous will cease to exist within 24 hours. Appeals against the decisions of the COUNCIL may be filed, in writing, within that time. All appeals will be decided by the COUNCIL before sunset of the same day.

This was published in 1919 but, although he continued writing in the 20s and 30s, he was never again to be so openly satirical.

Mikhail Bulgakov is now best known as the author of 'The Master and Margarita', a novel which is often compared with magic realism. In 1919, he was probably best known as someone who had fought alongside the Whites during the civil war but, unusually, had chosen not to leave Russia after the Bolshevik victory. He was already willing to predict what he saw as the likely outcomes of the civil war.

And we, the representatives of a failed generation, dying at the rank of pitiful paupers, shall have no choice but to tell our children, 'Pay, pay honestly, and never forget the socialist revolution!'

Anna Akhmatova was also expected to leave Russia. She was a well known poet before 1917 and some of her work was critical of Tsarist involvement in the first world war. She was not associated with any political tendency but the way in which she wrote about individual experiences of wider political events led to her being perceived as bourgeois in Bolshevik circles. The fact that she unequivocally saw Russia as her home was behind her decision not to go into exile despite her discomfort with the political regime.

I heard a voice. It called me.
'Come here', it spoke consolingly,
'and leave your senseless, sinful land,
abandon Russia for all time'.

But cool and calm, I stopped my ears,
refused to hear it,
not letting that unworthy speech
defile my grieving spirit

Akhmatova was later to become famous as a witness of the terrors of the Stalin regime through poems such as 'Requiem'.

Dralyuk does not claim that this collection is representative but it does provide insight into the ebb and flow of literary debate. While all the writers endorse the importance of change in Russia, there is no agreement among them about the means to affect that change. As the Bolshevik regime secured its authority, some of them continued to question it, sometimes at great personal cost. Mayakovsky became so conflicted about the regime that he committed suicide in 1930.

Putin would be much more comfortable with tributes about the 100th anniversary of the election of Stalin as secretary general of the Communist party in 1922 than any commemoration of 1917. The authoritarian style of a strong leader like Stalin is much more to Putin’s taste than the meandering views of a bunch of 'unreliable' intellectuals. Perhaps we can expect this press release from Putin:

The celebration of the anniversary of the revolution has been postponed.