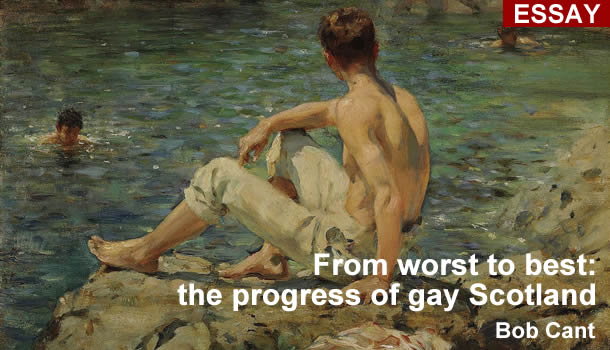 Scotland came top in a recent survey of 49 European countries of legal measures to guarantee LGBT equality. Older readers of SR will remember that it was not always thus. While male homosexuality was de-criminalised in England and Wales in 1967, it took a further 13 years before it was de-criminalised in Scotland. As it happens, an exhibition on queer British art currently showing at the Tate Modern is marking the 50th anniversary of the partial de-criminalisation of homosexuality in England and Wales.

I am curious to see if the Ayrshire-born painters, Robert Colquhoun and Robert MacBryde, make an appearance in the exhibition. While we do not know for certain how much the homophobia of 1940s Scotland pushed them out of the country, we do know that many Scots gay men in that period took the train south in the hope of finding a more tolerant place to live. The two Roberts enjoyed great success as artists and designers until the mid-50s, lived fairly openly as a couple and, socially, they mixed with the likes of Francis Bacon and Lucian Freud. It would be wrong to believe that these were exclusively homosexual circles but there was certainly a greater tolerance of homosexuality there than there would have been in most other parts of the UK.

One fellow Scot whom they would not have encountered was David Maxwell Fyfe, the Conservative home secretary between 1951-1954. Far from being tolerant of homosexuals, he described them as 'exhibitionists and proselytisers'; convictions for sex between men soared during his period at the Home Office. Interestingly, however, he set up a royal commission, chaired by Sir John Wolfenden, to look at issues of both homosexuality and prostitution. The Wolfenden Report was published in 1957 and, while it held no brief for homosexuality, it declared that the time had come to stop its criminalisation.

A minority report from James Adair, the procurator fiscal for Glasgow and an elder in the Church of Scotland, opposed any such changes. He argued that 'the presence of adult male lovers living openly and notoriously under the approval of the law is bound to have a regrettable and pernicious effect on the young people of the community.' In a speech he made to the 1958 General Assembly, he warned that supporting Wolfenden's recommendations was supporting the right for 'perverts to practise sinning for the sake of sinning.' An opinion poll carried out by the Daily Record showed that 85% of those who responded were against any de-criminalisation. The public faces of Scotland were well and truly in favour of the law continuing to punish homosexual behaviour.

Despite the public hostility, there were places where men could expect to meet other men with similar sexual interests. Both Edinburgh and Glasgow had pubs and cafes which were friendly enough to their gay customers but preferred not to be known as gay venues; once you had met some people there you would find yourself invited to parties in other people's homes. In the rest of Scotland, men met each other in outdoor places or in gents' conveniences.

There was a higher standard of proof needed for criminal conviction in Scotland than was the case in England and Scots law was much less interested in prosecuting men in relationships than men who had sex in public places. As late as 1977, two men, one in his 50s and one in his 30s, were sentenced to one year's imprisonment for having sex in a gents' toilet in Dundee. There was no law against lesbianism but public disapproval was strong and many women who wanted to share intimacy with other women also took the train south.

It was 1980 before male homosexual activity was de-criminalised to the same extent that it was in England and Wales, thanks to the campaigning of the Scottish Minorities Group (SMG) and the parliamentary intervention of Robin Cook. Important though it was to obtain legal equality, I would argue that the greater change which affected the lives of gay people was the communal self-confidence which emerged as a result of the campaigns. The growth in the number of venues on the gay scene increased opportunities for people to meet in congenial atmospheres. There was also a flurry of cultural activity and lesbians, as well as the recently legalised gay men, played a prominent role in that: there were women's groups, youth groups, oral history initiatives, outdoor groups and theatre productions.

Probably the core value amongst lesbians and gay men at this time was coming out as gay; after decades of secrecy and deception people were placing enormous importance on honesty. The poet, Edwin Morgan, came out in time for his 70th birthday; many people had suspected that he was gay but he came out at a time of his own choosing into a world that was more understanding than it would have been when he was a young man. There were, as he said, no bad results from having done so and his love poems, like 'Strawberries', remained on the Higher English syllabus.

HIV/AIDS was also beginning to emerge into the world's consciousness and, while individuals were often terrified beyond belief, many people volunteered in organisations which were seeking to minimise the impact of the epidemic. The openness which marked all these developments was unprecedented in Scottish history and was light years away from the silence which had surrounded homosexuality in the days of Colquhoun and MacBryde. The word 'community' could be rightly used to describe the patterns of connection among lesbians and gay men.

It was possible to believe that the forward march of equality for lesbians and gay men was unstoppable. Or it was until a group called Keep the Clause was set up to oppose the Scottish executive's decision to repeal the law, known as Clause 28, which prohibited the 'promotion of homosexuality' in local authority schools. The ensuing campaign, financed by a bus-owning billionaire, advertised on billboards and organised public events with the message that it was necessary, for the sake of the family, to keep the clause; their lack of silence about sexuality was, interestingly, very un-Scottish; they even went so far as to organise a private referendum.

Lesbians and gay men were fearful of their futures, suffered mental health problems and were physically attacked. In the end, all the political parties, except for the Tories, acted honourably towards their lesbian and gay compatriots and voted in favour of repealing the clause. But, strangely, no one involved in this whole farrago talks about what happened. It sometimes seems like a miracle that, in the course of 15 years, Scotland moved from living in the worst of times to the best of times. The process has been so smooth as to take the breath away. Some honesty about exploring what happened would be useful in itself; it might also be useful in ensuring that there is never a return to those days of fear.