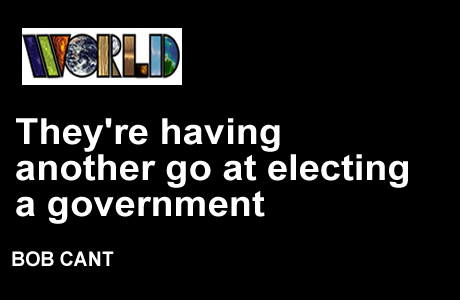 If you've ever wondered how to say 'It wisnae me' in Spanish, you need wonder no longer. Between now and 26 June we will hear a lot of Spanish politicians blaming other politicians for the fact that they are having a second set of elections within six months. 'Pio, pio, que yo no he sido!': 'It wisnae me'!

The elections on 20 December last year were seen as indicating that the Spanish electorate were ready for some kind of change in the way in which they were governed. It's a message, however, that seems to have been beyond the wit of the elected politicians to put into practice. As they seek to deflect responsibility for this impasse on to others, their message to the voters disappointed about the halt in the movement for change seems likely to be simple: 'Pio, pio, que yo no he sido.' (Someone else was responsible.)

I will go back to the beginning. After the death of General Franco, Spain went through a period where it made a transition to democracy. Elections have been held every four or five years since then, but from 1982 onwards, the governing party has always been either the right-wing Partido Popular (PP) or the social democratic Partido Socialista Obrero Espanol (PSOE). PSOE was committed to taking Spain into the modern world and, on its watch, the country joined the EU and NATO. Democratic choices were nominally available but as unemployment increased, public services were cut back and housing evictions multiplied, it was difficult to distinguish between the two parties; people felt powerless and popular anger grew.

Another aggravating factor was the shameless, all-pervasive corruption among the governing class; PP was undoubtedly greedier and positively stratospheric in its modes of corruption but PSOE was far from being squeaky clean. The close links between the banks and the politicians were well known; people who might have been expected to object to these practices were often welcomed on to the boards of banks and given credit cards with no upper limit as a reward for their complicity. The monarchy was not above suspicion; the king's sister, Cristina de Borbon, and her husband are both currently on trial for money laundering.

There was an explosion of anger in 2011, when a movement of indignados (angry ones) took to the streets of the major cities. Career politicians are often blasé about protest movements which have very general aims. This particular movement took on a different dimension when 8% of the electorate (1.25m voters) chose to support Podemos and sent five members to the European Parliament. Podemos was just one part of the indignados movement but it became particularly well known because of the way in which its leader, Pablo Iglesias, cultivated support on regular TV programmes; with his pony-tail and lack of a jacket and tie, he didn't look like a traditional career politician but his articulacy and charisma meant that he reached a much wider audience than he had done on the streets. Podemos's policies were not always terribly clear but they were of the left; originally their structure was based on circles of interest but, as time has gone on, they have developed a very centralised constitution which leaves enormous power in the hands of a tightly-knit leadership.

The results of the euro-elections were like a dam bursting and radical alliances began to emerge at local levels; Podemos took part in this alliance building with groups such as Compromis in Valencia, En Marea in La Coruna, Barcelona En Comu and Ahora Madrid. The municipal elections of May 2015 were a testing time for all the political parties, both old and new. The PP was not wiped out but they lost control of councils where they had been in power for many years. The radical alliance-building bore fruit and mayors who were in favour of change were elected in cities such as Barcelona, Cadiz, La Coruna, Madrid, Saragossa and Valencia. There were reasons to be optimistic about the emergence of these alliances. Within weeks, the level of housing evictions had fallen dramatically and public places were opened up for popular usage in an unprecedented way. People could see that the politics of change was already making a difference to their everyday lives.

The mood for change was felt not only on the left. The success of Podemos led to the bipartisan system of party politics being questioned as never before. One of the beneficiaries of this mood for a change was a previously small party called Ciudadanos. They saw the need for constitutional reform and they were opposed to corruption, but their politics were much more middle-of-the-road than those of Podemos. They all wore smart suits and have been described as 'barnizadas derechistas' (varnished right-wingers.)

The results of the national elections of December 2015 suggested that the voters were interested in a break from bipartisan politics. PP was still the largest party but they had lost their majority; PSOE came second but it was their worst-ever result in a national election; Podemos came third; Ciudadanos fourth; there were also smaller parties, such as the notoriously fractious United Left (IU), and several regional ones with aspirations for decentralisation of power. Until such time as a new prime minister could be elected, PP remained the acting government. They showed no respect for the newly-elected parliament; for example, the acting PP prime minister, Mariano Rajoy, agreed to the EU/Turkish plan on refugees but refused to go to parliament to explain his decision to his fellow MPs.

If a majority government was to be formed, 176 seats were needed. The PP was not interested in negotiating with anyone and treated the whole democratic process with contempt; eventually the King asked PSOE, the runner-up, if they would form a government. PSOE and Ciudadanos did reach an agreement but they were still short of the magic 176. Talks were held to see if a broader, more left-leaning coalition could be formed but relations between Ciudadanos and the left-wing parties proved to be a stumbling block. It might have been possible for a minority government to be formed as the least worst option if some groupings had agreed to hold their noses and abstain on the vote to elect a prime minister, but this did not happen. The tone of some of the exchanges between politicians was often hard and uncompromising. The new politics began to sound remarkably like the old politics.

I have not mentioned Catalonia. The current government of Catalonia does not have a secure majority; it favours independence and wants to hold a referendum to seek support for this course of action. PP, PSOE and Ciudadanos all say that this would be unconstitutional but Podemos, while it does not support Catalan independence, does support the right of the Catalan electorate to make that decision through a referendum. Seven and a half million people live in Catalonia and there is no way that their aspirations, however disputed, can be swept under a carpet; whichever grouping or coalition holds power in Madrid will have to engage with Catalonia.

Manuela Carmena, the mayor of Madrid, has expressed her concern about the failure of negotiators to reach some kind of agreement about forming a government. She has been mayor since May of 2015 and she heads a coalition which includes both members of Podemos and PSOE. She first came into the public eye on 24 January 1977 when the office of the communist-run law firm where she was working in Atocha in Madrid was the scene of a murderous attack by a group of right-wing gunmen; five of her colleagues died and several others were wounded, including a woman who miscarried her child.

The Atocha murders marked a significant turning point in the move away from the politics of intransigence towards a politics that is more open to dialogue. The job of politics, she says, is to resolve problems; politicians have to play with the cards they have been given by the electorate. She understands all too well where intransigent politics can lead. The politicians of today, however, failed to heed her words and a constitutionally-prescribed deadline was reached when another election had to be called.

Whatever one thinks of the rights and wrongs of the failure to form a government, one fact stands out. Seven point two million people voted for the PP in December; 16.3m people voted against them. As a result of the subsequent political impasse, the PP has continued to be in power for the last six months, despite the wishes of the electorate. They will continue to be in power for several more months until such time as their opponents can negotiate some kind of agreement. It is encouraging that talks between friendly radical parties have begun but there are still plenty of hurdles facing them in the coming months.

The polls suggest that the electorate remains roughly as split as it was in December. Weary voters are wondering if the politicians will resolve the situation any better this time. There is a story going around of a Papal conclave in the 13th century when the cardinals' failure to reach an agreement led to them being sequestered with a diet of only bread and water until they chose the next Pope; it took them two years before they overcame their ideological differences and focused on the task in hand. It couldn't be as bad as that in Spain, could it?