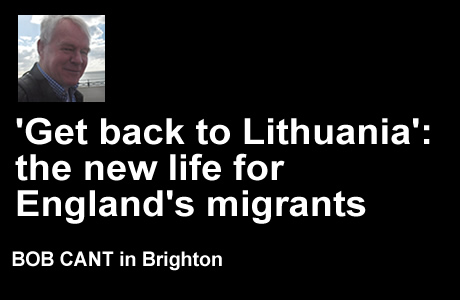 Some folk couldn't even wait to hear the result of the referendum before they started celebrating. I went to the local supermarket yesterday just after I voted and there was a rammy going on around the automatic checkout; it had rejected a cash card and the angry woman whose card it was had to vent her anger somewhere. 'Get back to Lithuania,' she shouted three times at the assistant who was trying to help her.

Much easier, it seems, to shout at an immigrant rather than query the banking system or her own organisational skills. I expect we'll hear lots more anger diverted at folk who look different in the coming days. The referendum campaign has given people permission to voice these xenophobic feelings in moments of stress. Life for immigrants here is about to become much more fearful and anxiety ridden.

The group of my friends who are most immediately affected by the result are those UK nationals who live and work in the EU and couples here where the partners are of different nationalities. No-one knows what will happen to them. The promises made by Leave campaigners that EU nationals already here are fairly meaningless. The Spanish government made some casual threats against UK residents in Spain the other day.

The legal situation is not at all clear but it is worth remembering that right-wing governments have been known to expel people with 'inconvenient' nationalities. But the emotional impact is already clear. People much younger than me had begun to believe – or even take it for granted – that they were not limited in their choice of life partners to people who shared the same national passport as they did. It was beginning to become a more open world in that sense. It was not a more open world for refugees but the limited system of the EU being a place without borders was something that people could aspire to. That vision of a movement towards a world without borders has taken a bad knock.

Looking people in the eye will become more difficult. Many of the people in my neighbourhood are EU nationals and some of them have children who were born here. They don't know their legal situation and neither do I. I want to let them know that I am as friendly to them now as I was yesterday but I am not really sure how much my smiles matter. If Scotland votes to become independent or if my pension loses all value, I may be looking for some of these smiles myself in a few months. It is probably only through small actions of kindness that I can help to reduce the atmosphere of distrust which has now been sanctioned. I have different difficulties with my neighbours who voted to Leave. I haven't yet seen the man who assured me that the UK would become more like Switzerland if we voted to Leave.

One of my neighbours grew up in a British colony and left it before it was partitioned. I knew that he had voted yesterday and when I met him on the street I was curious to suss out his views on the referendum. But he had other things on his mind. He wanted to talk about his chemo-therapy. He has survived several changes of definition in his nationality but their importance pales in comparison with the questions of his mortality. Thoughts went through my mind about the security of the post-Brexit NHS for people like him – or any of us. But it was important that he had someone to talk to, and I listened. I kept my thought about the NHS to myself, although they did confirm for me the value of continuing to campaign for a universally-free health service.

There are so many things that I cannot begin to control or challenge, but I can continue to be kind. Kindness is an important means of helping us to connect in a political climate that values isolation and fear. Individual kindness can, over time, grow into something more collective and more challenging of the post-Brexit regime.