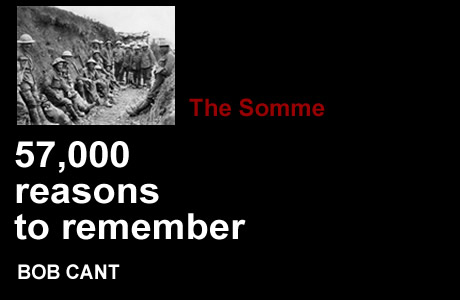 I still rub my eyes in disbelief when I read the numbers of British casualties on 1 July 1916 – the opening day of the long planned Battle of the Somme. 57,000.

This article attempts to give voice to some of those who were fighting in what proved to be the largest battle in the first world war on the Western Front. It draws on a variety of sources – letters, diaries, contemporary newspaper accounts, memoirs and taped interviews recorded many years later for the Imperial War Museum.

The original aim of the allies had been to mount an offensive against the Germans on several fronts but when the Germans attacked Verdun, the French concentrated much of their efforts there. The British then focused on the River Somme, in north-east France, and were supported by troops from all over the Empire, such as Australia, Canada, New Zealand, South Africa, Newfoundland; the Indian Army sent cavalry but, as trench warfare developed, they proved to be ineffective; soldiers from the British West Indian Regiment were not allowed to take part on an equal footing with white soldiers and were limited to labouring duties.

The military activity was organised on an industrial basis; or, more precisely, the way industry had been permitted to develop a century previously before the intervention of various Factory Acts. Soldiers were regarded less as human beings and more as expendable, replaceable units. The kind of camaraderie which had marked the pals’ battalions in the earlier part of the war was no longer valued.

Private Donald Cameron, 12th Battalion, York and Lancaster Regiment, gives us an account of the day before the main offensive began:

On June 30th, the Corps Commander, General Hunter-Weston, made a speech saying we were superior to the Germans in arms, artillery and everything else. He said that by the time our artillery had finished bombarding their trench and we went over, we’d be more or less on a picnic. The regimental band played, 'When You Come to the End of a Perfect Day'.

Cameron’s account of events in the first hour of the offensive on 1 July is of a different order altogether from what they had been led to expect. The allied commanders detonated their explosives 10 minutes before they launched their actual attack and this gave the Germans time to ready their machine guns.

The first wave went over at 7.20. The night before, they’d laid tapes, showing us the way to the cuts in the German wire. But when we went over, these tapes were missing, so we headed off in what we thought was the right direction. We’d been told that we had to walk at arm’s length from each other, and that’s how we started. But not for long. When we saw people dropping like ninepins on either side, we bent double, and in the end we started crawling. After a while, four of us got down in a shell hole. It must have been about eight o’clock. The firing went on, and we kept peeping up, looking over the top to check, and the bloody Germans were sniping our wounded. They were even firing at the dead. They couldn’t see us in our shell hole. I used to go to church when I was a lad, but I prayed more in that shell hole than I prayed in church.

The scale of human destruction was beyond belief and some regiments lost the majority of the troops that had taken part in the offensive that morning. Captain Montgomery of the 9th Battalion, Royal Irish Rifles tells of the sense of devastation he and the survivors in his regiment felt on their return from action.

The need for mass burials had not been foreseen. Lieutenant Norman Collins was made responsible for this task with the 6th Battalion Seaforth Highlanders:

After the attack I was appointed burial officer and told just to get on with job of burying the dead. I had a squad of men to help me, carrying the picks and shovels, and also stretchers. Of course some of the men were picking up their brothers and cousins and they of course were very upset, very very upset...In a Highland Regiment, there were many men from the same family, village or town. I mean some of them were obviously crying...it was a horrible thing to do, to have to bury your own cousin or brother.

After the failure of the first day, the troops fought from their trenches for the next four and a half months. The impasse was extremely tense and conditions were frequently very muddy.

The German troops were in no better situation. The name they gave to the Battle of the Somme was the 'Bath of Blood’. Stephen K Westman, German Army Medical Corps, describes the conditions in their trenches.

For seven days and nights we were under incessant bombardment. Day and night. The shells, heavy and light ones, came upon us. Our dugouts crumbled. They fell upon us and we had to dig ourselves and our comrades out. Sometimes we found them suffocated, sometimes smashed to pulp. Soldiers in the bunkers became hysterical. They wanted us to run out, and fights developed to keep them in the comparative safety of our deep bunkers. Even the rats became hysterical.

Food of a substantial nature was a problem. Bully beef, which was very similar to corned beef, was widely used. The fact that it was contained in tins made its distribution very straightforward. It was less than popular with the troops and Lieutenant W S Dane of the 4th Battalion Seaforth Highlanders wrote an ode to bully beef.

The hours I spend with thee, dear friend,
Are like a nightmare without end.
On you alone for life I must depend
My Bully Beef! My Bully Beef!
Each tin a meal, each tin a groan,
There’s gristle, fat and ground-up bone,
I finish up each tin and then –
A biscuit comes alone.

Warfare generated all kinds of difficulties where decisions had to be made on the spur of the moment and the results were not always favourable to anyone. Corporal Harry Fellows of the 12th Battalion, Northumberland Fusiliers describes one situation where he made what proved to be a wrong choice.

One of the new lads went down the traverse, two shells fell on the trench and he was buried. All we could see of him were his legs kicking. I got hold of one leg, my mate got hold of the other, and we pulled as hard as we could but we couldn’t move him. We started scrabbling away with our hands, but he’d stopped kicking. When eventually we got him out, he was dead. The strap of his steel helmet was under his chin, when it should have been on the chin. The helmet had trapped in the earth, and in pulling his legs, we’d pulled his neck out. The lad who’d pulled the other leg said, 'My God, we’ve strangled him. We’ve murdered him'. We never even knew that lad’s name.

By mid-November, after 140 days, allied troops had advanced six miles, at a cost of 415,000 British casualties, 200,000 French and 600,000 Germans. The experience of the Somme, however, did not dissuade the military leadership from further battles of attrition. The following year, a similar battle took place at Passchendaele; it was renowned for being muddy for the whole three months.

Even after the battle was over, soldiers felt a sense of responsibility to the families of their dead comrades. Private William Hay of the 1/9th Battalion, The Royal Scots made a promise to his closest friend in his dying moments.

My pal Alec went down to the HQ and one of these blasted heavy trench mortars dropped where he was. He was very badly mutilated. When he was dying, he said to me, 'You will tell my mother – won’t you?’ And I said. 'I will.' I was devastated. I had lost my pal. Anyway, I went home on leave to see his mother. I told her about how Alec died, and she said, 'You’re not telling me the truth!’ I told her he was shot through the heart, you see. I couldn’t tell her he was... I said I was with him when he died. So she accepted that, and she gave me a great big bag of cakes. She worked in a baker’s shop.

Violet Jacob, the Montrose poet, lost her son, her only child, on the Somme. Some years later, she published a poem she had written about him; her tone is one of restrained dignity. That was the approach that many people used to try to make sense of a war beyond sense which they had survived; others, whom they had loved, had not.

But miles on miles from Scottish soil
You sleep, past war and scaith,
Your country’s freedman, loosed from toil,
In honour and in faith.

The photograph used above, from the collection of the Imperial War Museum, depicts troops of the Royal Irish Rifles resting in a communication trench during the opening hours of the Battle of the Somme, 1 July 1916