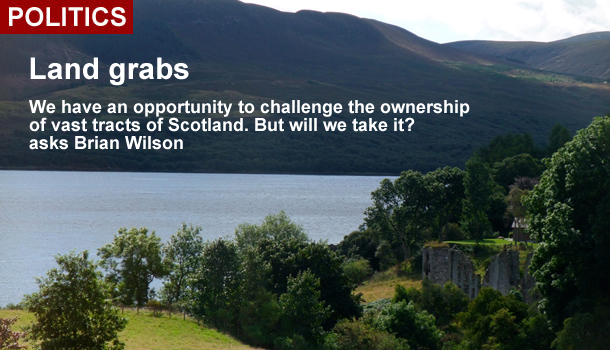 When I first became interested in the Crown Estate Commission, more than 30 years ago, I could hardly believe my luck on reading Section 1, Clause 1 (5) of the Crown Estate Act 1961 – the legislation which, to this day, governs the workings of this curious organisation.

It states: 'The validity of transactions entered into by the Commissioners shall not be called in question on any suggestion of their not having acted in accordance with the provisions of this Act regulating the exercise of their powers, or of their having acted in excess of their authority, nor shall any person dealing with the Commissioners be concerned to inquire as to the extent of their authority or the observance of any restrictions on the exercise of their powers'.

I doubt if there is another catch-all clause like it on the statute book, effectively giving the Crown Estate Commissioners the power to do exactly as they saw fit and making it illegal for anyone to question their behaviour. What an open door this presented for law-breaking on the cheap, since it was scarcely credible that anyone in breach of Clause 1(5) would be prosecuted or placed in the tower for such an act of lese-majeste, while the off-chance of such martyrdom offered a journalistic bonus.

The problem at that time was that the Crown Estate Commissioners acted with all the arrogance that the legislation encouraged. Most people outside of London’s most elegant squares and thoroughfares had never heard of them. They managed most of the foreshore and seabed and a scatter of rural estates including a few in Scotland but, overwhelmingly, the value of their portfolio lay in lucrative metropolitan property and attracted little interest from persons 'concerned to inquire' about anything.

From my perspective, it was the advent of Scotland’s salmon farming industry which changed all that. It came to my attention that whole sea lochs on the west coast were being leased willy-nilly to multinational companies by the Crown Estate without any consultation with local communities or elected authorities. At that time, there was a reasonable prospect that this new industry might have developed through small-scale, locally-owned businesses, consistent with the pluralistic economy of the crofting counties.

Instead, in total secrecy from an office in Burlington Place, the Crown Estate had pre-empted that possibility by doing deals with Unilever, Booker McConnell and the like. At that time, the Scottish interest was exclusively represented by the 8th Earl of Mansfield, who acquired the rank of First Crown Estate Commissioner. The more one delved into the Commission’s role as owner of the seabed round most of the Scottish coast, the more local scandals emerged about its high-handed and capricious behaviour.

Throughout the intervening years, I have taken some satisfaction from breaching Section 1, Clause 1 (5) of the Crown Estate Act 1961 as often as possible. It would be disingenuous to pretend that nothing has changed in the interim and, I hope, in part as a result. The Crown Estate has been pushed gradually into greater accountability and, in 2007, was relieved of its regulatory function over the seabed. It has grudgingly given some money back to the aquaculture industry by funding research and since 2012 it has paid into a Coastal Communities Fund which dispenses grants to local projects.

None of this, however, goes to the root of the offence which is that a primary natural resource, the seabed, is owned by an unaccountable body for which 'the marine estate' is a minor sideshow in financial terms, compared to the onshore property empire that it manages. The net revenues which flow from the Scottish end of the Crown Estate to the Treasury are relatively minor but would still be better spent in coastal communities than subsumed into the great maw of the consolidated fund.

There is also the chimera of marine renewables to be taken account of. Even though the rhetoric has by far exceeded the reality, there is still the potential for substantial revenues from such projects as ever materialise. Is the role of local communities to be restricted to watching the lights on offshore windfarms or tidal arrays twinkling in the distance, or will there be revenues accruing – just as there would be, as of right, if the developments took place on land under crofting tenure?

As the aura of unaccountability around the Crown Estate has gradually broken down, the case for democratisation and devolution has grown. Both the Calman and Smith Commissions recommended that the Scottish Estate should be devolved. This principle was incorporated into the Scotland Act of 2016 and in future revenues will be paid into the Scottish consolidated fund. Earlier this month, the Scottish government initiated a consultation on how the Scottish Estate is to be managed.

On all past form, the preference of the current regime would be to create a Scotland-wide body as close to ministerial control as possible, with the money staying in a central pot to be branded as their own munificent largesse. Fortunately, the Smith Commission very deliberately set out to pre-empt this approach. Following the precedent set by Danny Alexander when, as chief secretary to the Treasury he established the coastal communities fund, the Smith Commission made clear that it saw Edinburgh only as a bureaucratic resting place for the powers and funds which are to be devolved.

It stated: 'Following this transfer, responsibility of those assets will be further devolved to local authority areas such as Orkney, Shetland, Na h-Eilean Siar or other areas who seek such responsibilities'. Unless the Scottish government accedes to that very specific direction from the Smith Commission, this will be the central area of contention when legislation eventually appears. To people living in Scotland’s coastal communities, entrusting control and revenues to a quango in Edinburgh would represent little if any improvement.

There is nothing in the consultation paper which suggests that devolution of the land-based Scottish Estate will amount to anything much more than a change of brass signs on the Dean Village office. Yet here, surely, is the opportunity to create a vehicle which can play a major role in the process of Scottish land reform – if, indeed, there is any serious interest in that cause. When all the Crown flummery is stripped away, this Estate is a repository for publicly-owned land and an objective of those charged with managing the Scottish Estate should be to extend it, not least by testing current assertions of private ownership.

This issue was signposted in 2000 when John MacLeod, an opera singer, tried to sell a large proportion of the Cuillin mountain range for £10 million in order to fund the restoration of Dunvegan Castle. I was in the Scotland Office at that time and asked the Crown Estate to test Mr MacLeod’s legal title. Quite simply, if it did not exist, then the mountains in question would belong to the Crown (or in future, The Scottish Estate) rather than to him.

The Crown Estate sought legal advice which produced ambiguous conclusions. Mr MacLeod’s ancient titles were 'capable of including the Cuillins' but there was no conclusive evidence that they did so. However, there was also insufficient evidence for the Crown to mount a claim of ownership. At the time, I said it had been a worthwhile exercise: 'This is the first occasion on which such a claim of ownership has been subjected to this kind of scrutiny. The conclusions highlight the fact than any meaningful challenge to such claims of ownership will only come through legislative change rather than interpretation of existing Scots law'.

Vast areas of Scotland are held on assertions of ownership which are as flimsy and untested as the MacLeod claim to the mighty Cuillins. If the appointed managers of the new Scottish Estate were let loose with a brief to test such claims – in the name of the Crown and backed up by modern Scottish legislation on proof of title - we really would have the prospect of something radical happening in Scotland.

But then, as the indefatigable campaigner on such matters, Andy Wightman, has pointed out, Scotland suffers from an excess of lawyer-politicians whose instinct on matters like this is rarely to challenge the text-books from which they have learned. Compared to persuading Holyrood that devolution of the Scottish Estate could actually represent an exciting political opportunity, moving the Crown Estate from where it was 30 years ago to where it is now has been the easy bit.