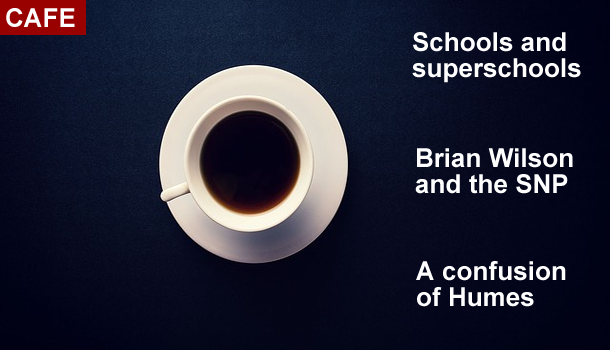 The anonymity of huge schools breeds all sorts of anxieties. Why do our elected representatives not do just that: represent the collective views of those who elected them. They are not experts in any field, yet make decisions as if they were.

Ask the people who are working in schools, or any organisation, what they need, then try to deliver it. We have, alas, some politicians who are following their own agendas to get what they want.

On 13 September last year, deputy first minister John Swinney launched a governance review of education. Launching the review he stated that the guiding principle for the way schools should be run is simple. He said that decisions should be taken at school level and that teachers should be empowered, as well as supported by parents and the local community. In addition, monies would go directly to the school.

Some weeks later, results from the 2015 Programme for International Student Assessments (Pisa) were unveiled, highlighting Scotland’s further decline in its world education ranking. Standards have been dropping in reading, maths and science with Scotland now third of the four home nations. Only Wales is lagging behind.

In response to these findings, John Swinney said that they 'undoubtedly make uncomfortable reading.' However, these results were not a surprise since the 2015 Scottish Survey of Literacy and Numeracy was published when the Pisa assessments took place. This also outlined the negative trajectory of Scottish education standards.

The upshot of these two sets of figures is that they have prompted both the first minister and deputy first minister to openly announce that the Scottish government needs to push ahead with 'radical' educational reform. It has been further reaffirmed that 'the government is going to concentrate on taking action, which will change the position...some of the action will be controversial and could meet real resistance, but opposition parties need to get behind these actions'.

In recognition of Scotland’s slipping standards over recent years, the Hometown Foundation, a Scottish registered charity with an interest in education, began to consult with concerned parents' and teachers' groups three years ago to develop solutions that would give rise to greater educational attainment. As a result, detailed business plans for state-funded autonomous schools were developed and have been sitting with the government for up to two years. Since May 2016, we have been advised to keep the other finalised business plans on hold until 'feedback has been provided on how the financials have been presented on the first business plans'. To date, we have received no feedback, and the parent and teacher groups are becoming increasingly frustrated by the lack of engagement and response.

So what does all of this mean in real terms and why have the Hometown Foundation’s proposals for state-funded autonomous schools been the elephant in the room?

These proposals fully empower teachers, parents and schools by funding schools directly, putting head teachers in charge and making provision for greater parental and community support. In fact, this is what the government says it wants to see happening in the education governance review. So what is the problem? We see no reason why the government is unable to allow these pilots to progress outwith the review, in order to inform the consultation process and wider education reform in Scotland.

Could it be that the Scottish government has been trying to keep everyone happy? That is just not possible. Local authorities and teacher unions have vehemently resisted the notion of state-funded autonomous schools – driven by their own vested interests. This is based on self-preservation rather than the best outcomes for the group they are meant to be serving – the pupils. In order to appease these vested interests, the cost-effective and progressive model for state-funded autonomous schools has been kicked into the long grass. Proposals for a particular Scottish model, which is community-led, innovative and tailored education 'by diverse means', have not been allowed to see the light of day.

We see no reason why state-funded autonomous schools should not get sanctioned at an early date. Every day lost in barren consultations will result in even more young Scots having to leave school without the tools they need to make a success of their lives.

It’s a great shame that someone with the obvious talents of Brian Wilson should continually begin interesting and thoughtful articles only to see them drift inexorably into laboured critiques on the SNP government at every opportunity.

What began as a tale about the treatment of his Romanian friend Joe should have concluded with a wholesale condemnation of the UK government’s handling of the Brexit farce. Is it not the case that Joe and thousands of others like him are, in the words of Liam Fox, mere 'bargaining chips’ and at risk of being returned to their country of origin? Who knows? Even the Queen is not allowed to know anything other than 'Brexit means Brexit’.

Mr Wilson suggests that the Scottish government 'should advance the case [for the free movement of labour with EU countries] vigorously in its discussions with Whitehall’. They have submitted their views 'vigorously’, and seek to keep Joe and others in Scotland, but how can they properly 'discuss’ anything with someone whose views are secret, even from the head of state?

Seeking Scottish independence is the very raison d’etre of the SNP and we can expect to have the 'threat’ (or promise) of an independence referendum hanging over us for as long as they exist or until they succeed. So please Mr Wilson, learn to live with it. It is a fact of life.

And the Band played on
ALASDAIR MCKILLOP

Pull the other one
ANTHONY SEATON