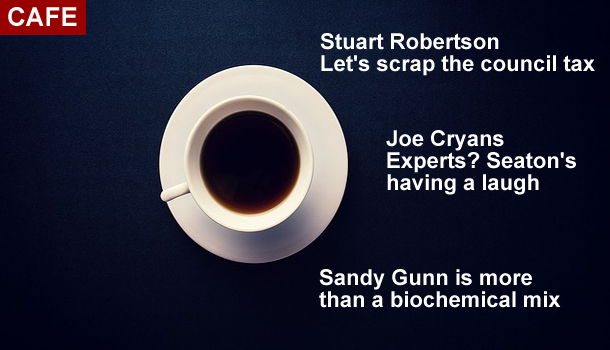 Following the recent about-turn by the Scottish government, we now have the local authorities in the firing line as ‘tax raisers’ with a directive to apply additional rises to bands E-H as well as a rise across the board for all council tax bands. Those unlucky enough to live in bands E-H will have to stump up the additional largesse on the basis that this is ‘progressive taxation’ whatever that may mean.

This crass disregard for local democracy by taking tax-raising decisions for local services away from local authorities is based on the premise that the occupiers of these homes must be wealthier than the average Scottish Nationalist supporter and therefore well able to pay.

a) The occupiers of these homes can only realise their perceived paper wealth through the sale of their property.

b) Those occupiers with a mortgage are already waiting for monthly payments to increase as inflation creeps up and interest rates rise. Even if this happens slowly, it will still represent an additional outgoing, reducing disposable income for expenditure on local goods and services.

c) Home owners have already been taxed on the income required to buy and service their property.

d) A large number of occupiers are on fixed incomes.

The property-based council tax is outdated and is a sledgehammer approach to penalise those who save and put their money into the country’s assets rather than expend it on consumables.

If residents are to be denied local accountability for the setting of the council tax would it not be better to scrap local taxation altogether? Instead increase central taxation, for which the government now has the necessary powers, to take into account the amount collected by councils and then redistribute it to local authorities on a headcount basis. At a stroke you would have removed substantial administration costs across 32 local authorities. Scotland has a population roughly the same as Yorkshire, so it couldn’t be that difficult to put such an equitable scheme in place.

Could Anthony Seaton perhaps write an article about the 'experts' who told us that Saddam Hussein had WMDs? What about the global warming farce – brought to us by 'experts' who selectively manipulate data? With vaccines the 'experts' tell us that they are safe - when they are not, and can cause serious injury, including death, to young children. In 1998 Dr Andrew Wakefield published evidence linking the MMR vaccine with autism in children...the 'experts' slandered him and ruined his reputation.

Experts? You're having a laugh.

I was interested in Manfredi La Manna’s reply about death. I entirely agree with him about the importance of the transplant of viable organs, and have made donor arrangements.

Perhaps, however, he is making the 'nothing but...' mistake. Suppose I come to traffic lights and wonder about the shade of red and strength of bulb, but do not stop. BANG! I missed the point seeing nothing but the mechanics. So too the computer on which I am writing is plastic and metal, but it has more than that...this article can go on. Similarly while we are the biochemical mix there are electro-chemical impulses in the brain which contain messages/character/soul/the inner person and can go on.

Christians believe that the designer of the laws of science and nature has given information about this. To see 'nothing but...' the biochemical mix is as equally a matter of faith as is the belief that we are more than the biochemical mix.