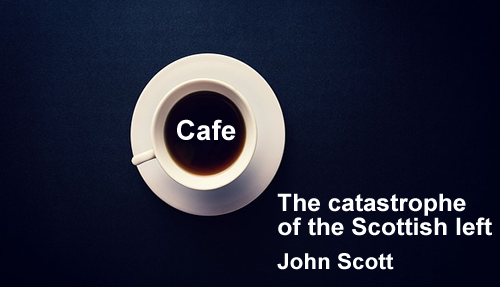 'The last 40 years have seen a consistently catastrophic politics for the left all across the rich world'. That is Gerry Hassan's damning generalisation; making the left almost as unsuccessful as England's football team. Yet, it is very hard to make a counter argument.

How then does Scotland's left fit into that catastrophe? Just over 40 years ago, the Scottish left was buoyed by the arrival on the political scene of a group of talented young men (and the absence of women was not as remarked on then as it would be now) committed to socialism. Their core text was the 'Red Paper on Scotland' edited by Gordon Brown. The other contributors included Robin Cook, Jim Sillars, Tom Nairn, John McGrath and a former Labour councillor in Glasgow, Vincent Cable. (Beyond this group there were Alex Salmond, John Reid, Brian Wilson and Alistair Darling – all with similar views.) The comparison with the anaemic Scottish left today is startling.

Their background was in the universities and, to a lesser extent, trade unions. Their approach was undoubtedly statist. Capitalism was seen to be failing and the state had to intervene to put this right. Rereading the 'Red Paper', you are struck by how earnest and self-confident the contributors were.

We know what became of the better known authors but what of their ideas? The truth is that, quietly, they backed away from the core ideas in the 'Red Paper'. Once Thatcher had won three elections, there was little enthusiasm for an attempt to turn back the ideological clock. Just as important, the 'Red Paper' had presumed the continuation of industrial Scotland. If it had had one priority, it was to revive a way of life and culture which was ailing long before Thatcherism. By 1987, industrial Scotland had gone the way of Yeats's romantic Ireland.

What alternative futures were open to the left? In fact there were two; one implicit and the other explicit. Each offered the prospect of success and, for a good number of years, this promise looked set to be fulfilled. It is worth remembering just how dominant the Labour party – with Scots in the forefront as never before or since – was in the decade around the millennium.

The implicit one was economic. It involved accepting the new status quo and taking advantage of the opportunities it created; employment for a large number of people doing jobs which had barely existed when the 'Red Paper' was written. Jobs in offices using computers which had fairly obvious advantages, e.g. being cleaner and safer over most of the departed industries. It involved accepting finance capital as a major part of the economy. For the left, this was initially done reluctantly but later with enthusiasm.

Its high point involved Gordon Brown and Alex Salmond competing as to who could fawn over Fred Goodwin more deferentially. In making this journey, the Scottish left, regardless of what was declaimed at political rallies, was moving not just from socialism but from social democracy. If, as was promised, this ended boom and bust, the bargain might have been worthwhile. The cost of misguided enthusiasm showed in 2008.

The explicit alternative was to buy into the idea of 'progressive' politics. (Personally, I have long been suspicious of the word 'progressive' in politics. It was used in the 1950s by the Tories in local government in Glasgow. I was warned that this was proof positive of Tory duplicity; hiding their true identity.) Progressive politics, from the 1980s on, meant promoting social liberalism.

This involved empowering previously disadvantaged groups, particularly women, gays and ethnic minorities. There is no need to rehearse here the ways in which they had been ill-treated. Ethnic minorities are a fairly small group in Scotland and the welcome improvement in their status has not had a huge impact on Scottish society as a whole. The position of gays became particularly contentious because Christians viewed issues such as same sex marriage as evidence that Scotland was abandoning its Christian heritage. In that, they were largely correct and they are still coming to terms with this momentous change.

For Scottish society, the change in the position of women has been far more significant. Male domination has collapsed as can be seen weekly at the first minister's 'Question Time'. The infamous glass ceiling has been smashed. Unhappily, as the American historian Timothy Snyder noted, working-class women have fallen through a glass floor and been left lying in the blood and shards.

As with economics, the left's social successes have been accompanied by serious failures. Neither the economic policies pursued by Gordon Brown nor the identity politics of the progressive elite has had an answer to Scotland's most deep-rooted problem; the people left in industrial towns with no industry. Thus far, the story of the Scottish left is little different from the struggling left across Western Europe and the USA; success in promoting social liberalism combined with the absence of a coherent economic argument.

A decade ago, another factor entered the equation: nationalism. Hostility towards nationalism was one of the key features of the 20th-century left. In Scotland, it was more a case of refusing to take nationalism seriously. The SNP had to be 'Tartan Tories' because this was something that the left could understand – those devious Tories again. Genuine mainstream nationalism was beyond comprehension.

The success of Alex Salmond in becoming first minister in 2007 transformed matters. Here was a version of nationalism which sounded more convincingly radical and left-wing than Jack McConnell's Labour party. It could and did win elections. The Scottish left, en masse, embraced independence. Only the diehards in the Labour party held out. It did not matter that the SNP had been as foolish in misjudging the bankers as Gordon Brown; nor that their policies on matters like education showed a near-total absence of original thinking. There followed a love-in between radical Scotland and independence which is still going on.

It is unlikely to end well. At the heart of the independence movement is the SNP. (It is not much of an exaggeration to say that only the SNP matters.) The weakness of the Scottish economy means that, with or without independence, government will struggle to maintain the existing level of social spending.

In Scotland, the time of reckoning for the left has been delayed – not cancelled.