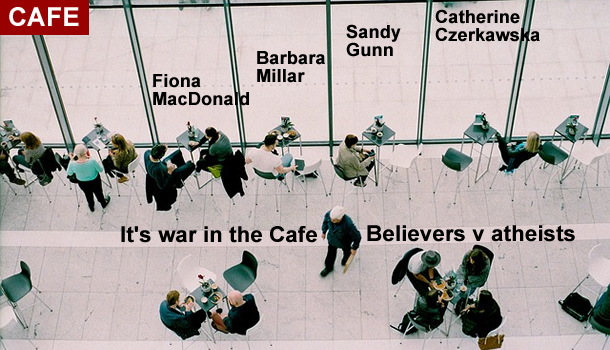 It seems to me that Manfredi La Manna has succeeded in proving Catherine Czerkawska's point. His self-confessed smugness on the subject of religion would appear to inspire him to believe he can see into the souls (assuming atheists believe in such a concept) of others, asserting, as he does, that because Ms Czerkawska is a lapsed Catholic, she must believe in a specific divinity, born of a virgin mother, announced by a winged angel, the resurrection, etc.

There would appear to be no understanding that religious belief is a spectrum and one may sit anywhere on it. The very existence of such a spectrum seems to cause considerable and disproportionate frustration to some non-believers. So much so that they feel compelled to challenge it (and usually with condescension and the assumption of intellectual superiority) whenever it manifests itself.

Some people have religious faith. Get over it.

Manfredi La Manna suggested a number of 'god tests' for believers in the supernatural. I add my own experience. A few years ago my aunt became gravely ill and was rushed into hospital. My very religious cousin asked friends and family to pray for her. Not having one iota of religious belief (as my cousin knows), I suggested I would be thinking of her and wishing her well. The crisis was averted and my aunt rallied. God was praised. Thank you, said my cousin, to all who prayed for her. God has answered our prayers. (Not a word of thanks, by the way, for the skilled medical and nursing team involved). Less than a week later, my aunt was dead. God was not blamed. God wasn't even mentioned. If he exists, he must be a mercurial old bugger – you're saved one minute, dispensed with the next. Sadly, my aunt's illness was, ultimately, beyond the abilities of medical interventions to prolong her life further – and that's why she died. God had nothing to do with it, one way or the other.

May I reciprocate Manfredi La Manna's invitation to take tests, by inviting him to self-administer the following tests?

Test one: Christians believe that God started the galaxies, using the laws of science and nature. To believe otherwise means believing that the galaxies created themselves out of nothing. If so it would be logical for this to be duplicated on a small scale by making something out of nothing. I wonder if Manfredi is able to produce such a duplication?

Test two, part one: The existence of scientific equations implies a pattern in the universe which points to a pattern-maker. Given the development of minds like ours which like to communicate, it seems not unreasonable for the mind behind it all to communicate with the minds which have developed. Christians believe this happened in Jesus. I wonder if Manfredi accepts the possibility or if it is ruled out automatically?

Test two, part two: Had the resurrection of Jesus been a 'made up artefact', then one could have made a better job of making it up, e.g. with better witnesses such as a university professor or rich businessman as the first witnesses, rather than women who had no legal position in the ancient world. I wonder if Manfredi is willing to examine the evidence or is its rejection an a priori assumption?

However, I would agree totally with him that there is no room for smugness. Both views are a matter of faith. But the key factor is that that in which we place our trust is trustworthy. When Jesus met 'doubting' Thomas, he did not give him a row for questioning, but invited him to examine the evidence. When Thomas took that test he had the integrity of genuine questioning that when he got evidence it led him to commitment, humbly finding meaning for life in the dimension of God.

Although I've maintained a discreet silence, I really have to respond to
Manfredi La Manna.

(1) I noted that like many of my friends and colleagues who would not go so
far as to call ourselves atheists, I am a 'lapsed Catholic', but perhaps he
doesn't understand what that means or didn't read my piece properly.

(2) What I do believe is private and personal. I don't inflict it on others, although we sometimes discuss it. In fact it's a process of exploration, rather than a fixed set of rules, into which a great many life events and experiences have fed. I'm afraid he makes the mistake of so many atheists of trying to tell me what I believe in. It's as classic a piece of mansplaining as I've encountered this year.