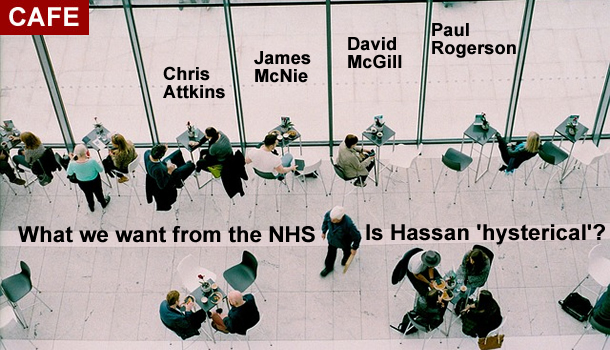 As usual, Anthony Seaton writes eloquently and wisely, in this case about doctors breaking bad news. However I do question his assertion regarding 'the unwillingness of the population to pay sufficient tax to ensure that NHS employees have the time and space to practise good medicine'.

I observe an increasing number of people stating publicly that they are not only willing but keen to pay more in support of an NHS they value. What they don't want is for their contribution to be wasted on management consultancy, yet more administration, or siphoned off for other government purposes. For example, I am unaware of anyone clamouring for seven-day-a-week services but, as Anthony advocates, affording the time for sensitive and compassionate care is high on most people's agenda. Here on the Isle of Arran we are indeed fortunate to enjoy exemplary primary health provision and our family has personally experienced the huge difference it makes to be on the receiving end of it.

Surely it is politicians (of all persuasions) who are reluctant to put up taxes, presumably on the assumption that this will cost them votes? Those of us who truly value what the state provides only ask that any additional charges provide tangible value for money. That can only happen with transparency, sadly lacking in all walks of life these days.

Finally, some years ago, I managed to persuade my 90-year-old mother, a retired doctor herself, to see the consultant ophthalmologist, as she was beginning to have trouble reading the crossword clues.

Having examined her, he said: 'Well, I have bad news and good news for you, Doctor McNie. Which do you want to hear first?'

'You are going blind with macular degeneration', he said.

'What's the good news?' she asked.

'You'll be dead before you're blind!'

Like so many ostensibly left-leaning critics who can't abide Corbyn's resilience in the face of an unprecedented establishment and media firestorm, Gerry Hassan now resorts to outright hysteria in his denunciation of the Labour leader.

His piece has more holes than a colander, but let's peer into just a few.

First, the inconvenient truth is that Labour's immolation in Scotland predates Corbyn – and New Labour was heavily defeated in two general elections when Corbyn was an obscure backbencher.

Labour did not implode in Scotland because it was too progressive; it imploded because (among many other things) the members thought it wise to be led by the kind of politician who enthusiastically joins right-wing thinktanks such as the Henry Jackson Society.

Second, Hassan says it's 'simplistic' for 'Corbynistas' (what’s wrong with 'socialists', not pejorative enough?) to blame Blair et al for the party's present ills. He declares with a flourish that Labour's predicament is common to social-democratic parties 'across the western world' – magisterially missing the point.

It is precisely because social democratic parties embraced the wholly discredited neoliberal consensus that they have descended into irrelevance. Small wonder they have ended up beached, having jettisoned any principles they may once have had in the erroneous belief that we had reached the end of history.

A decade on, they have still to digest the lessons of Lehman Brothers – as, it appears, has Hassan. That is why so many of the marginalised have embraced right-wing populism – after all, what else is there? The Liberal Democrats? It's also why so many in English Labour constituencies voted for Brexit. At least the Scots have Holyrood. English working-class voters were left with no voice at all and if they have chosen the siren voices of nationalism and even fascism, that's not Corbyn's fault either.

Corbyn is also the 'worst kind of left-winger' because he continues to believe things he used to think. Beg pardon? Something that was true then can be true now. So the public (then as now) want the railways run for the benefit of passengers; and The Who (then as now) are not as good without the late Keith Moon.

Finally, Hassan accuses Corbyn of being 'divisive', which takes the full Garibaldi. A man elected by the members on a record mandate who has more than 100 aspiring Brutuses sitting behind him in the Commons. The plotters and the wreckers and the briefers – the ones who rushed to abstain on austerity when the ink wasn't dry on the last election's ballot papers. Are they 'divisive'? What do they have to offer? More austerity, more job insecurity, more low wages. More of the same.

With regard to the demise of the Labour party I strongly disagree with Gerry Hassan’s comment that '...the Corbynista left retort that most of this can be traced back to the New Labour era and the sins of Tony Blair and Gordon Brown is equally superficial'.

There are many people like me, possibly hundreds of thousands, who were life-long supporters of Labour until the New Labour era. For us it was unthinkable that a Labour government could be responsible for the invasion of Iraq, the failure to properly regulate the banks and the enthusiastic propagation of PFIs. These actions/inactions resulted in the needless slaughter of countless numbers of innocents and years of chaos in the Middle East, poverty for millions world-wide, and seemingly unlimited indebtedness for future generations. Lies, criminal behaviour, incompetence and greed, and yet no-one has been brought to account, nor has any apology been offered. Too many of us will never forgive them, and that is the legacy that poor feckless Jeremy Corbyn has inherited.