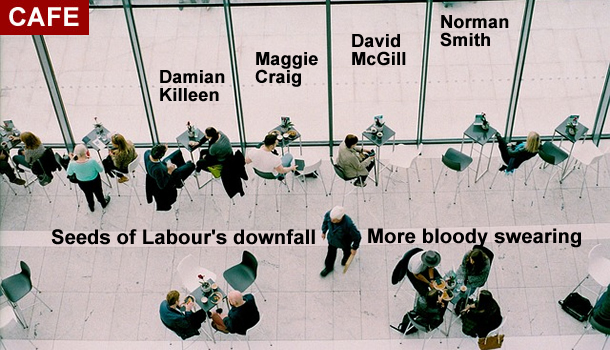 Thinking about Gerry Hassan's piece on the demise of Labour: the seeds of Labour's ultimate demise in Scotland were laid in the first few weeks following its accession to power in the newly elected Scottish parliament. The decision not to use the tax-varying powers for which the electorate had voted, alongside and equal to their support for the establishment of the parliament, disempowered the public and contributed to the 'wee pretendy' image so effectively articulated by Billy Connolly. Labour also chose to ignore one of the major planks of the Scottish Constitutional Convention chaired by Canon Kenyon Wright, the continuation of the Scottish Civic Forum as a broad-based platform through which active citizens and third sector organisations could engage with and challenge government.

Thirdly, Labour strongly resisted proposals for the parliament to develop specifically Scottish policies on significant matters, such as an anti-poverty strategy, in case it generated responses that were out of kilter with the UK government's responsibilities for welfare. Social inclusion policy development, in which I was actively involved as a third sector representative, became a tug of war between aspirations expressed within Scotland and the pressure from Labour to resist anything that might fuel 'nationalist' tendencies.

I came to Scotland over 30 years ago as a Labour supporter; now, as an SNP member (since the independence referendum), I can see a real 'tax and spend' government and a Scottish child poverty strategy in place. I would like to see a more participatory form of government, opening up the parliament's stultified committee processes, but there is time for that. Yes, Blairism did a great deal to disenchant Scottish Labour voters but the Scottish Labour party's unionist priorities, deference to the UK Labour government and its defensiveness in government from the start laid the foundation for the current wipeout from which it is unlikely to recover any time soon.

I enjoyed Rachel Sharp’s article about swearing and the photograph which illustrated it. We had a conductress – now there's a word that dates me – on our school bus back in the 1960s who used to sternly warn us: 'There'll be no bloody swearing on this bus'. She seemed never to hear the contradiction there.

In the 70s, I remember noticing the difference between my best beloved's colleagues in the Merchant Navy and male students at college. If the f-word slipped out, the seafarers almost always apologised for swearing in front of a woman. The male students used it liberally and seldom felt the need to say sorry. Back then, 'bastard' was a really foul swear word. Now it can be used almost affectionately.

These days lots of women happily swear. I'm one of them, even though I've had my bus pass for a few years now. I tend not to swear in public because I think if you're having a verbal dispute with someone you've lost the argument if you start cursing. At home I swear at my computer and at the TV. In the latter case, politicians and news programmes with skewed values are usually involved.

Some of the characters in the books I write also swear. There are times when no other word will do, in life or in fiction. If you're an 18th century Redcoat or a 19th century grave-robber, you're hardly likely to say 'drat' when your war wound from Dettingen starts playing up or when you drop the wooden spade (quieter for digging up the dead at midnight) into the grave.

My grown-up children find it hilarious that their usually fairly lady-like mother gets stick from some readers for using 'foul language'. Not me, missus, it was the character who said that. One US reader wrote blithely on Amazon that she had put my book in the bin, all because of a few wee bad words.

I do wonder what we're going to do to relieve our feelings when what used to be powerful swear words become so over-used that they no longer have much impact. I also think it's profoundly sad that the worst thing you can call someone, the c-word, refers to the female genitalia, the route by which we all come into the world.

I enjoyed reading Ron Ferguson's letter about the Blue Brazil aka Cowdenbeath FC. It brought back several memories including the fact that not many people realise that the origins of the first and second world wars were due to Germany's obsession with preventing Cowdenbeath's domination of world football. Apparently when Cowdenbeath was formed in the late 1800s Bismarck made his famous remark, 'Gott in Himmel, der verdammt Cowdenbeath scheinhunds'. This started it all off. Lack of space prevents the next 100 years being described but full details are available on the excellent fan website.

As to Dunfermline Athletic and their nickname, I was once told by my grandfather – so it must be true – that the term 'Pars' comes form a disaffected supporter who was heard to exclaim, 'Atheltic...this f-ing lot is mair paralytic!'. Dunfermline Athletic was famous as Jock Stein's first management post and also for Charlie Dickson, a centre-forward who could be infuriatingly brilliant, usually at the same time. Charlie was always on the international team fringe and was rumoured to turn up at internationals carrying his boots, just in case a team member went sick so he could step in.

Incidentally, has no one ever inquired as to why Ian Rankin's Rebus supports Raith Rovers rather than the nearer Cowdenbeath? Ron's second book about the Blue Brazil, 'Helicopter Dreams', is also worth a read. Gordon Brown wrote the foreword and he is a Raith supporter!

Whatever happened to us agnostics? For all their erudition, none of the correspondents in the believers v atheists Cafe even mentioned us. As a Unitarian agnostic I think it's possible to believe in the existence of a supreme being (nothing comes from nothing) and yet wonder how he, she or it came to be. Question everything, hedge your bets, and build your own theology.