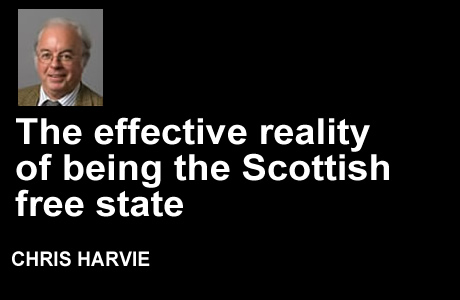 I
The May 2015 election I viewed from a National Geographic ship, the MV Explorer, sailing from the Pool of London past the Lizard to the western ocean. Ten days later – ploughing through what’s really a sea-region –I reached Bergen. Note that the Norwegians made their billions from the black stuff when it was around $20-30 a barrel in the 1990s.

Putting the 2015 info together I found UKIP had polled well in three main regions: the south-east outside the M25 (the orbital dormitories to which Londoners were decanted); the old heavy industrial areas (their state subventions now being wound down); and large provincial towns without universities (which lacked both a commercial elite and a left opposition). On these foundations and confronted only by the maladroit Labour elite UKIP’s Faragismo has since been able to build, targeting itself specifically on Referendum Day.

There’s an Arnold Bennett novel from way back called 'The Card', filmed in 1952 to a script by that master of criminal ingenuity Eric Ambler, starring Alec Guinness as the Five Towns rogue Denry Machin and documenting his rise to local power over humble potters and country gents:

'Of course, this'll make him more popular than ever,' said another. 'We've never had a man to touch him for that.'

'And yet,' demanded Councillor Barlow, 'what's he done? Has he ever done a day's work in his life? What great cause is he identified with?'

'He's identified,' said the speaker, 'with the great cause of cheering us all up.’

In the epoch of 'Britain’s Got Talent’ and ‘Top Gear’ Nigel Farage evolved into a fruity version of Lewis Carroll’s Great Black Crow, hovering over the Tweedledum-Tweedledee act of BoJo and Dave. His UKIP cleverly managed to thrive on its detested Europe through its MEPs, while remaining incompatible with old-style first-past-the post elections. Fortunately for it: its only elected Westminster MP Douglas Carswell has stuck in Nigel Farage’s well-lubricated throat like a fishbone.

Gordon Brown’s 'Leading, not Leaving' (2016) also takes off from Bennett’s Potteries, with a redundant skilled worker needing a lot of cheering up, because reduced to a zero hours contract, and minded to 'Vote Leave’. This could have been a short, concentrated polemic like Keynes’ 'Essays in Persuasion', with an index – essential in political works – and every word counting. There are useful facts but Brown is dense and repetitive and only his minute typography reminds us of the matador of 'The Red Paper on Scotland'. 'Tis forty years since!’

II
Germany and Tuebingen University was a safe haven after the devolution defeat of 1979, and put sea between me and Margaret Thatcher, whose associates invested our oil earnings generously in BaWue’s industries and brought a quarter-century of constructive work. The present UK debacle bears out my confidence in a place that makes useful things and is economically responsible.

Yes, Germany has its UKIP equivalent in the Alternative fuer Deutschland but it’s still at 12% no bigger than previous mushroom groups which have risen to around 15% and then shrunk, in a country where immigration has been on occasion awkward but digestible and tolerated since 1945. I found a complex and successful manufacturing country which took technical education and the environment seriously. Banking is about 50% in public hands; newspapers are reliably organised on regional lines, public transport is good, and cars small: compare the Stuttgart minister-president in his Smart two-seater with Melrose, Scotland’s rustic city annexe with its in-your-face, exhaust-spewing, 'bankers’ tanks’.

What will matter over the coming months isn’t just political manoeuvre but relaunching a constructive economy as we supplement our British links with new European alliances: a sustainable economic machine, capable of reinforcing that of mainland Europe and developing its own specialisms. Around our coasts sloshes the coal-equivalent of 12,000 million tonnes annually: an energy bounty inaccessible to Germany, restricted by its limited northwestern coastline: needing subsea generators to tap the tides and currents off our coasts, and upland lochs as pump-storage reservoirs. At the same time icemelt is opening up communications north of Siberia which can chop 7,000 km off the North-East package. This will call for break-bulk ports, of the sort sensibly offered by the imaginative 'Oceanspan’ project in the 1970s.

And south-west there’s Ireland, convinced of the importance of Europe, and as dismayed as we should be about the London government’s neglect of the British-Irish Council. We must now face the effective reality of being the ‘Scottish Free State’, and the value of common enterprises in energy and transport. In 1884 Prof J H Lorimer, first proposer of a European federation, thought of it as the builder of 'architectural structures of prodigious magnitude and grandeur.’ It’s our idea, so let’s have a Portpatrick-Bangor rail tunnel, for starters...