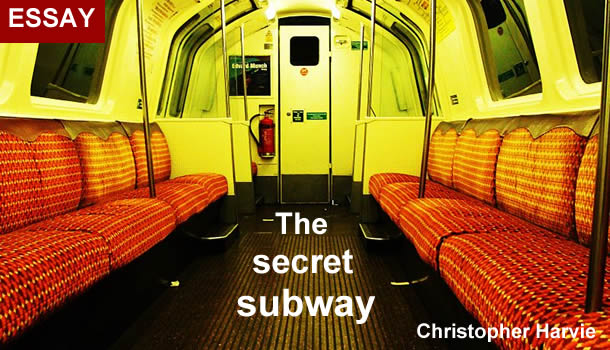 I
On the TV a train is whizzing through a tunnel below Glasgow like something out of Kubrick’s 2000 'A Space Odyssey'. This huge pipe – which currently looks (thanks to its temporary railway) like a tunnelled metro – will cost at least £250 million for three miles: four times the cost of the new Sheffield-Rotherham tram-train. Further, it’s being built without planning permission or 'environmental oversight': a recipe-from-hell rather like the original cost-estimates of the Edinburgh trams or the Borders Railway. So, not just where do we-in-Scotland go from here, but how did we get here, Glasgow going from first to last in the urban transport race?

In 1896 the Glasgow district subway at a circuit of 10.5 kilometres was the first proper underground tube system in the world. True, it was cable-powered when London’s City and South London (1890) was electric but the latter was only three miles long, from Stockwell to London Bridge. Budapest’s sub-surface 'Andrassybahn' was also electric when it opened a couple of months earlier but not much longer. But Glasgow’s little wooden cablecars had to run continuously and amazingly did so without a break until 1936, when they were converted to electric traction and in 1979 replaced by the 'Clockwork Oranges'.

Cable was a Scottish technology and worked. James Brunlees of Kelso had completed in 1855 the great steam-powered cable-inclines (these were common a few miles south of Berwick on the Northern coalfield) that brought Sao Paulo’s coffee down to the port of Santos. Andrew Hallidie built San Francisco’s famous cable-cars a decade later. The Glasgow subway would be in place – on budget and on time – to carry millions of visitors to the great Glasgow Exhibitions of 1901 and 1911, and workers to the munitions factories of 1914-18: when the Clyde, not the military, beat the Germans.

For the rest, after depression hit in 1922 the 20th century proved too much for Glasgow; and its leaders, across the parties, got just about everything wrong. That secret subway tunnel – there to flush excess water from a bloated road system, propelling the world’s second-largest folk in far too many cars – is proof of that.

By the 1940s a frightening, and still quite unknown, figure had staked the place out: Robert Bruce, city engineer, the Pol Pot of town planning, wanted in his 'Bruce Plan' of February 1945 to raze the central business district – City Chambers, Art College, Central Station, the lot! – and plant it with point blocks and motorways. With this for strategy Glasgow has had to live – and die. Osbert Lancaster, no fan of Le Corbusier (generously treated by architects despite his Vichy loyalties), didn’t have to parody this ghastly style in his satire Drayneflete Revealed. But, still on its narrow-gauge track, an unusual four feet, the Glasgow subway would have survived way down below.

II
Metro development had bustled from the 1860s first as rather messy steam sub-surface or 'elevated' lines, often in 'commercial capitals' (Glasgow had one in the mid-1860s, Chicago’s 'El' came in 1897, New York’s subway, 1904) then increasingly for proper Metropoli and electric-powered: Paris 1900, Berlin 1902, Buenos Aires 1912. The technology was given a boost by the first world war's concentration of strategic power in Whitehall and the start of effective air raids, which encouraged a dual utility. Herbert Morrison, of Scots descent, framed the London Passenger Transport Board – with its brilliant integrated-design policy – as transport minister in the ill-starred Labour government of 1929-31, though it was set up by Ramsay MacDonald’s Tory-run National coalition.

Meanwhile Metrovick engineers got from Motherwell to Moscow in the late 1920s, planning Stalin’s huge metro just as Scots masons under 'Vasily Geste' aka William Hastie (1754-1832) had laid out Empress Catherine’s cities in the 1790s and after Napoleon’s invasion in 1812. But Lunacharsky’s vast neo-classical cavern-stations – 'the people, too, deserve their collonnades' in that great survivor’s phrase – were also air-raid shelters.

Hitler, a petrolhead when not on parade, used trains for genocide and mobilisation. In 1940, before Barbarossa, he honoured Henry Ford as 'heroic Anti-Semite' (though Dearborn’s pioneer giant generators at 'Motown' Detroit were the work of the Glaswegian Alex Law). The next two decades would be Ford’s. Undergrounds survived, were even extended (though few new schemes were built: only three – Rome, Toronto, Cleveland – in the 1950s). The interurban trolley lines which once straddled east-central USA were wiped out to boost car sales and Big Oil – see that Bob Hoskins classic 'Who Framed Roger Rabbit?' (1988) – a fraction survived as freight sidings. Gumshoes drove cars down mean streets and in 1958 the last trains left San Fernando as Los Angeles’ huge Pacific Electric Railway folded. Johnny Duncan and, this side, Glasgow’s Lonnie Donegan mourned:

Only in the 1960s and 1970s did the tide start to turn, with 21 new projects – many on the US’s west coast, gearing up first to fight in Vietnam (and get beaten by 'little pajama guys on bikes') then sucking in nerds from Berkeley and Stanford, for high-technology industries. From then on systems of the BART (Bay Area Rapid Transit, planned 1957, built 1972) type, using a segregated track and often fully underground and automated, have marked practically every conurbation, as the $7 oil barrel vanishes into the past. There are presently over 150 in operation, and hundreds more to come. When Glasgow subway goes automatic, grandpa will get to play with the hi-tech bairns.

III
But 'urban electric' was a trade that the Scots had once dominated – Hurst Nelson and Pickerings of Motherwell and Wishaw and the emigrants Dick Kerr in Preston built many municipal and imperial systems. As British street trams faded out there was nearly a revival in 1959, with the Glasgow Art School-designed, Linwood-built, 'Blue Trains' with their then-revolutionary dual-voltage electric motors – to enable use in the city’s steam-age sub-street tunnels. But the system was knocked out for a year by power blowouts (dual-voltage took 20 years to bounce back in Karlsruhe) and the Beeching cuts closed down the once-huge North British Loco. This was an overture to the later 'trolls against trams' that disfigured the Scotsman, put more genteely by Alistair Darling, Sandy McCall Smith, Kenny MacAskill, etc., birthing the legal feeding-trough of the Hardie inquiry. This has cost at least £3 million to date (more than planning Tuebingen’s new trams); conclusions zilch.

But look abroad: since 2010 alone six new tram systems have started up in Africa; six in China; 12 elsewhere in Asia; 15 in Europe; 10 in the USA, six in Australasia and South America: 55 in all. Trains and trams can inspire an almost mystical devotion, but there is a pattern behind it.

Two of the four game-changing systems were effectively Scottish transplants: alongside BART and Beijing (1971) came Hong Kong (1979) now 175 km and Singapore (1987) now 171 km. The first only got its rail line to the Canton mainland in 1912, eight years after its famous double-deck trams. The second was only connected to Malaya in 1923. But Lee Kuan Yew decided in 1967 to go for a rail-based system and make the motorist minority pay to subsidise it after the first line opened in 1987. Lee was effectively an updated version of Glasgow’s pre-1914 tram king, the ferocious James Dalrymple.

IV
The railway has remarkably adapted to the air age. The car has not. The new poor of Los Angeles can blow as much as 45% of income on car-commuting; those who use 'active' plus public transport better their health and productivity away from the strange world of Ford, Thatcher and Clarkson.

Many of these 'new generation' schemes involve airport links, which have to be fine-tooled into the management of hordes of people subject to stringent security: on account of menaces ranging from lethal fuel vapour on site as well as fraying public order, flash wealth, and an alcohol habit that waltzes with the 'greed-is-good' proposition itself. Hence two things: the 'airport line' and the – quite new – 'People-Movers of Aeropolis': the latter being a new high-tech urbanism detected by the Financial Times a decade ago: in which conventional road transport has only a dwindling-if-louche place.

At the last count there were 20 automated people-movers at US airports, and 23 elsewhere, ranging from short-distance shuttles at Denver or Heathrow's Terminal Five/parking pods to miniature metros at Newark NJ (a monorail that actually works), Bangkok or Dubai.

These chunks of complex technology aren't marginal. They are weapons which now emphasise the difference between the hell-hole of Moscow Sheremetevo (only rail-linked to central Moscow since 2005) and the calm efficiency of Dubai International prospecting its full flush of connecting rail lines – from the new Saudi Arabian electric hi-speed system to local metro, tram, and monorail.

Here's something to end on: contemplate poor, motor-crushed Glasgow through its psychotic mausoleum, the Riverside Transport Museum. The frightening Zahya Hadid stapled cars to walls like shot stags. These glowered down on stuffed locomotives, models of disastrous ships: 'RMS Lusitania', 'HMS Hood'. Nowhere was there the exhilarating sense that you get in the tin sheds of York or Bo’ness that a Caledonian single-driver could steam in with its train from Glenfinnan or the Forth Bridge (mythologies that brought some humanity to the CGI world of Harry Potter). The Clyde is a great shipbuilding river now reduced to mending billion-quid destroyers: in an engineer friend’s vivid prose 'Stuffin’ carcases they ca’ it. Thae things cannae f*ckin move!' Only by a determined effort to get well away from 'Joabs oan ra Tarr!' to making things again will Glasgow flourish.

The retiring figure of Sir William Purves, son of Sir James Brunlees’ Kelso and the Hongkong and Shanghai Bank, was in the finance of China’s industry, akin to what Brunlees was in Brazil, and latter-day Dubai was the brainchild of a quiet Scots diplomat. Bill Duff was factotum to Emir Maktoum, Sheik of the little port after the Brits kicked out old uncle Shakbut in 1973. He worked from the Edinburgh geographer J H Lorimer's great 8,000-page Geographical Survey of Persia and the Gulf which the India Office had funded, 1908-15.

Duff didn’t like the Posh-and-Becksville urban beachworld one bit, but the airport rapidly became a hub. Lecturing in Perm in 1999 – 'Permian' sandstone came from Sir Roderick Murchison geologising there in the 1830s – I asked my Russian students where their computer gear came from. Already the answer was: 'Dubai.' US computer embargos hadn't worked. They were simply shifting the arc of trade from the Trans-Siberian south to the New Silk Road, and into Chinese hands. In their turn Beijing spanner-men are now talking off-the-shelf metros for towns as 'small' as two or three hundred thousand – and London’s first direct freight train via the NSR arrives via the Channel Tunnel any day now...