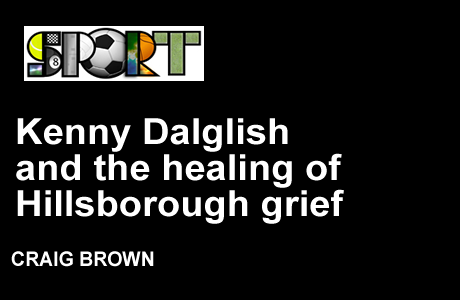 The impact of the decision to confirm that the 96 people who died in the Hillsborough disaster were unlawfully killed quite understandably resulted in an outpouring of unbridled emotion which had been suppressed for almost three decades. Of course there are calls for reprisals which undoubtedly will materialise, but from the court deliberations and final conclusions there emanated some positives.

There should be enormous pride in the contribution of Scotland’s greatest-ever footballer whose influence at the time of the disaster, and subsequently, has been nothing short of marvellous.

Kenny Dalglish, a sensitive and conscientious man, attended as many funerals as possible and met with grieving relatives and friends at the time and in the 27 years which have elapsed since. Such is the regard in which Kenny is held, especially in Liverpool, his support and counselling has been invaluable and greatly appreciated. No one could have done more to alleviate the widespread anguish.

The rivalry between the two city clubs hardly matches that in Glasgow but the Everton-Liverpool competition is almost as passionate. Who, then, should be consistently seen as spokesman for the Goodison Park club? Yes, another Scotsman, former Dumbarton player, Scotland internationalist and Everton legend, Graeme Sharp, now one of the club’s three ambassadors. Graeme’s sincere utterances have gone down very well with both the red and blue devotees in Liverpool, and have been appreciated with respect throughout the UK and beyond.

For a wonderful illustration of togetherness and united sympathy, the front of the match programme, Everton v Bournemouth (30 April) is a classic example. Alongside a photograph of a girl in Everton blue wearing number 9 is a boy in the red of Liverpool with 6 on his back. The number, who died, 96, is depicted by these two youngsters standing hand in hand. The wording is apposite……'Everton Football Club salutes the Hillsborough families and their total vindication as Fighters for Justice. Theirs is the greatest victory in the history of football. RIP, the 96. They took on the wrong city – and they took on the wrong Mums'.

It is not uncommon for opponents, even bitter rivals, to come together in times of tragedy or adversity. The moving sight of Walter Smith and Ally McCoist carrying the coffin of Celtic’s Tommy Burns is an example which springs to mind.

The task of safety at major sporting events, especially football, is traditionally entrusted to the appointed club security officer. It is his responsibility to ensure that there is well-being for both participants and spectators. The day before every SPFL match in Scotland there is a ‘pre-ops’ meeting attended by local police and representatives of the competing clubs. It was an enlightening experience recently to witness the efficiency and detailed preparation of Motherwell’s Alan Marshall and John Morgan and Willie Beattie of Aberdeen FC. It is of interest to learn from Ronnie Hawthorne, another ex-police officer who is in charge at Celtic, that his club provides one steward per 100 spectators, ensuring that there are between 400 and 500 stewards, in addition to a generous police presence, at a home match.

What is extremely unusual at the top level is to have a police-free match. Grampian Police have successfully attempted this exercise at low-risk SPFL games at Pittodrie Stadium, Aberdeen, and did so at Gordon Strachan’s first match there as Scotland manager in February 2013. The response was gratifying and the current SFA security officer, David Brand, publicly congratulated the 16,202 fans on their exemplary behaviour.

Last month in Germany, a country noted for its efficiency, I attended the Bundesliga match between second bottom Eintracht Frankfurt and local rivals, third bottom Hoffenheim. In spite of the very high stakes and the 51,000 crowd (normal at Frankfurt), there was no hint of trouble. Everyone was frisked on orderly entry and the deliberately obtrusive police presence made comparisons with Hillsborough inevitable.

The extent to which security is commissioned varies enormously and depends on circumstances throughout the world. Competing for Scotland in the FIFA World U20 Championship in 1987 in Chile, then a military state, we experienced the ultimate in security. All countries had extensive military presence, including helicopter surveillance over the hotels and en route to the match venues. The naturally nervous feeling induced by the helicopter existence was soothed somewhat when the pilot took groups of our players and staff on pleasurable sightseeing trips along the Pacific coastline.

To alleviate any form of concern it is desirable to have a person who is au fait with all possible sources of disturbance and who is respected by players and supporters alike. The Scottish Football Association in my time had the doyen of all security officers, ex-Chief Superintendent Willie McDougall. He had the capability to enter any bar in any city and exert control over the Tartan Army. His formula? 'I just eye-balled the main man, and that was it!'

When in Monaco for the re-arranged ‘game that never was’ against Estonia, Willie and I were strolling around the Monte Carlo marina when from a group of string-vested, kilted fans came the shout, 'Haw Willie, haw Craig, whit aboot they boats, eh?' Willie was quick to point out that they were not boats but expensive yachts and when he advised the lad that one of them belonged to the Aga Khan the good-natured response was typical, 'Aye, ma maw’s got wan o’ his cookers!'

In early 1995, Willie and I went, as usual, on a reconnaissance trip to Moscow to look at the facilities for our forthcoming game against Russia. After three days in the city we joined the business class queue at the airport. Our host from the Russian Football Federation thought we should be at the front of the queue and waved us forward. Our embarrassment was exacerbated when a lady, whom we found later to be a wife of a member of the consulate, looked up at Willie and down at me and complained in the strongest possible terms, 'Who are these people? I have been here for one hour and they are moved in front of me!' Willie was not a quick-witted chief superintendent for nothing. 'Madam', he replied. 'Glasgow police and my prisoner!”

There was only one occasion when Willie was outsmarted and security was violated. That was Belarus v Scotland, Minsk, June 1997. While the team was being given the customary police escort to the national stadium, Willie was too late to notice that close behind was another coach, that of an Ayrshire Tartan Army group, also availing itself of the armed outriders. John Grigor, and his gloating ‘disHONEST MEN’ from Ayrshire, had succeeded in hoodwinking Willie and the local security by getting the resourceful fans right to the main entrance.

In the context of Hillsborough it may be inappropriate, but I trust neither insensitive nor indefensible, to add this touch of humour, to which I’m sure no Liverpudlian would take exception.

Next edition of the Scottish Review: 18 May 2016
Subscribe Today