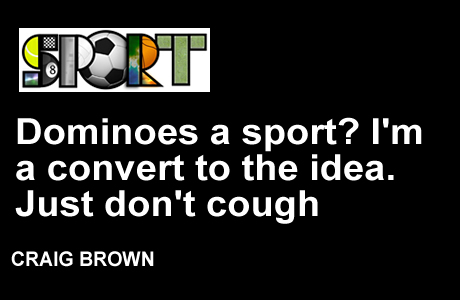 When speaking with an erudite and articulate gentleman last month he advised me that he was president and chief executive of arguably the fastest growing sport in Scotland. Impressive is his 300,000 membership, 6% of the Scotland population, and convincing was his argument, but I was filled with scepticism. When did his game of dominoes become a sport? To consider otherwise was repugnant to the said Billy Mitchell from Saltcoats.

My research took me to various sources. The first was his own website – that of the Scottish National Domino Federation, the official governing body, established as recently as 2007. In view of what the chief executive told me I was not at all surprised to read that the executive committee 'has a combined sporting administration, legal and financial expertise spanning over 150 years'. The word 'sporting' was there all right. Deliberately? I’m not sure, but very significantly.

My contention always was that for an activity to be classed as a sport it had to have some physical component. This is consistent with the Concise Oxford Dictionary where 'sport' is defined as an activity involving physical exertion and skill in which an individual or team competes against another or others for entertainment. The Free Dictionary, however, gives credence to Mr Mitchell’s affirmation: 'Sport: 1. An individual or group activity pursued for exercise or pleasure, often involving the testing of physical capabilities and taking the form of a competitive game; 3. Any particular pastime indulged in for pleasure'.

The italics in definitions 1 and 3 are mine and support Mr Mitchell’s convincing assertion (as well as my revised argument) that dominoes can, legitimately, be classed as a sport.

The issue of which activities are considered to be sports and which are not is controversial and there seems to be no definitive answer. Sports councils don’t have their own criteria; therefore debates abound regarding dancing, darts, poker, fishing, cheerleading, croquet, chess, equestrian, draughts, bridge and now dominoes. Wikipedia is in no doubt classifying many activities as mind sports. Scrabble, Hare and Tortoise, morabaraba, kamisado, Bōku, Pokemon, backgammon, Decamentathlon, Monopoly and many others all have world championships held annually.

Leaving the semantics decision aside, dominoes is an extremely popular activity throughout the world, allegedly originating in China eight centuries ago. The uptake is Scotland has been startling as a recent visit to a cosy hostelry in Ayrshire confirmed. Currently co-owned by two brothers one of whom is a true legend in sport, not only in Ayrshire, but in Scotland as a whole, the Victoria Bar has been the business of the Montgomerie family for 51 years.

Raymond, as every Kilmarnock football fan will confirm, was captain of the team which won the Scottish Cup in 1997. He is now the popular commercial manager of the club which 50% of football fans in Ayrshire were delighted to see retain their Premiership status last month with an impressive play-off victory against Falkirk. When his father, Raymond, stepped down, young 'Monty’ as he is unsurprisingly called, and his brother, Jim, took over the running of the thriving business where organised dominoes originated in North Ayrshire 50 years ago, the year we are often reminded that England won the football World Cup.

The ethos of the 'sport’ is one of winning or losing with grace and of strategic thinking, memory and numeracy. The recipe for success is a mirror of that football formation which has stood the test of time, the four, four, two. In the case of dominoes the 4-4-2 mnemonic represents 40% skill, 40% luck and 20% playing the percentages. The playing methodology can be taught and for that reason there are numerous coaching courses to improve the mind-set of the participants. Online instruction, too, is available at three basic levels: beginners, intermediate and advanced. Positive features of the sport include the fact that it can be played at every age and that there is no gender inequality.

The world hotbed of dominoes is the Caribbean, especially Jamaica where it’s an accepted part of life. The game is played in the streets there and the style of play is loud. Opponents are intimidated by the thumping of domino pieces, or 'bones’ on wooden tables, and, like any game, dominoes has its share of cheats. Surveillance cameras and judges are on hand to watch for prearranged codes like hand movements or coughing to indicate which pieces partners hold or to communicate strategy. The Florida-based chairman of the World Championship of Dominoes, Ruddy Schaaffe, who travels regularly by private jet from Miami to Kingston has an ultimate goal: 'We’d like to see dominoes become an Olympic event'.

The World Championship this year will be in Andalusia, USA, hosted by the local Rotary Club. This annual tournament, which began in 1976, guarantees fun, friendship and competition and has, since then, awarded trophies and almost $1m dollars in prize money. Las Vegas, never slow to pick up on current trends, has also introduced the 'World Series of Dominoes' with $100,000 in prize money and, as we have come to expect from our American cousins, the obligatory championship ring, this one encrusted with black diamonds.

I am assured that with more than 80 leagues in Scotland, seven in Ayrshire, dominoes is not part of any current recession in the country. Negotiations are ongoing for a Home Nations and European Championship in Scotland where already there is not quite the World Championship-level incentive but substantial prize money for the National Championships, this year at Airdrie Working Men’s Club. Sponsors traditionally don’t throw money at lost causes so the generous support nationally of those such as Willie Hamilton of Hamilton Tarmac confirms the potential of the sport.

The information gleaned from Billy Mitchell reaffirmed the increasing popularity of dominoes. He also confirmed that the production of a regularly produced magazine, 'Spot On' for Scottish dominoes will begin in September and already there is considerable interest in the publication. Billy can count this new devotee as one of his subscribers.