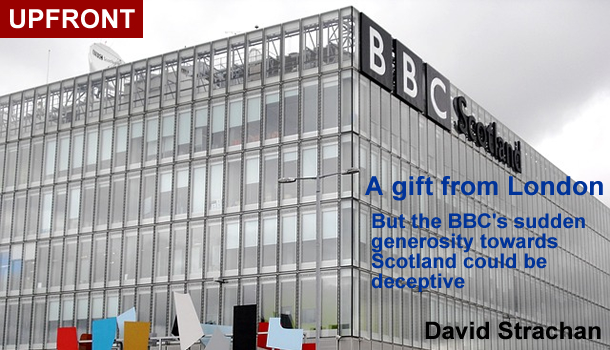 Last week's announcement by Lord Hall, chairman of the BBC, of new investment for Scotland, including the establishment of a new channel, was welcome. It goes some way to remedying the sharp contrast between BBC licence fee raised in Scotland and licence fee spent in Scotland.

A reminder of the numbers: 95% of licence fee gathered in Wales is spent there, plus what is given to S4C; 75% in Northern Ireland; but just 55% in Scotland.

These numbers are only known to us because of the persistence of the Scottish government and the parliament’s culture committee in asking for BBC statistics to be published. Until last July they were a closely guarded secret, allowing the BBC to get away with years of sucking money out of Scotland.

The money for the new channel (£30m) is welcome, as is the promised increase in Scotland of £20m for the UK’s network channels – but only if it is strategically spent.

Previous increases in spending by the BBC have largely been absorbed by Lift and Shift ('Waterloo Road', Snooker, 'Question Time'), delivered by the branch offices of London companies. These branch offices, unlike Scottish companies, use their increased turnover to invest in cable and satellite and international production. But they do that by taking profits out of Scotland and spending them on growing their head offices in London.

Our company, by contrast, has recently made 'Air Ambulance ER' (Sky 1), 'One Day In' (BBCW), 'Cybercrimes' (BBCW), 'Vinnie Jones Toughest Russia' (National Geographic), 'Big Fish Man' (Discovery) here, bringing millions into the sector and sustaining many jobs. And we’ve also used the money from secondary sales of our programmes overseas to invest in development here.

Buried deep in Scottish Enterprise’s website is a report on the state of the Scottish TV production sector. Published in autumn 2016, it shows a slow drift of commissioning towards the Scottish branches of London companies and away from Scottish-owned companies. It also shows a decline in the overall size of the sector.

These two facts are not unrelated. In the years since BBC quotas for Scotland were introduced, our company’s BBC network commissioning has dropped significantly. Had it not been for BBC Scotland’s local commissions and this year some strategic commissioning by Channel 4 ('Britain’s Wildest Weather' and 'Britain at Low Tide' on air just before Christmas and 'Rivers with Jeremy Paxman' from last Saturday) we would have been winding down. Other companies too have benefited from Channel 4’s determination to find ways to grow Scottish companies.

The BBC’s new money for Scotland could at last turn slow decline into growth. But only if BBC commissioning uses its money cleverly to build for the long term.

David Strachan is MD of Tern TV, based in Aberdeen, Glasgow and Belfast

Daily Sketch
Decline and fall of the Scottish press